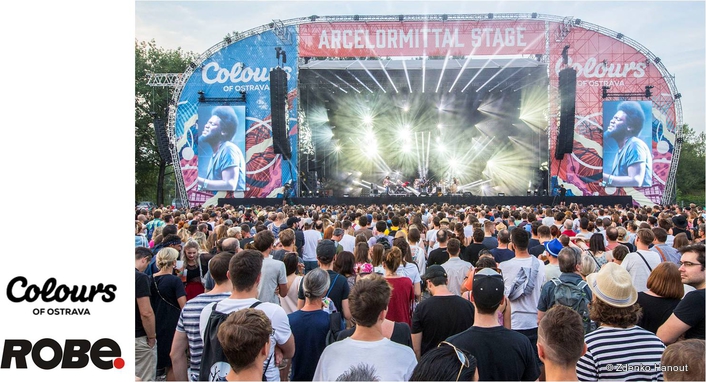 Robe moving lights made a major contribution at the 2017 Colours Of Ostrava (COO) festival with nearly 100 fixtures utilized to light the ArcelorMittal Stage in a stylish and flexible production design created by Kamil Kruzik. The lights were supplied by oneAVteam, the largest audio visual rental group in Central Europe. Three companies cooperated on this project – AV MEDIA, RentalPRO and YVENTECH.

The annual four day international multi-genre Festival is staged on the site of the former ironworks at Dolní Vítkovice, Ostrava, Czech Republic. The site was inaugurated in 1830 and was a major hub of metal production activity in the area until 1998. It now provides an impressive and highly charismatic backdrop to the event with its unique industrial architecture. The lively festival includes some 20 performance stages with over 350 live music acts, plus discussions, debates, theatre productions, films and workshops, and is enjoyed by around 50,000 people. 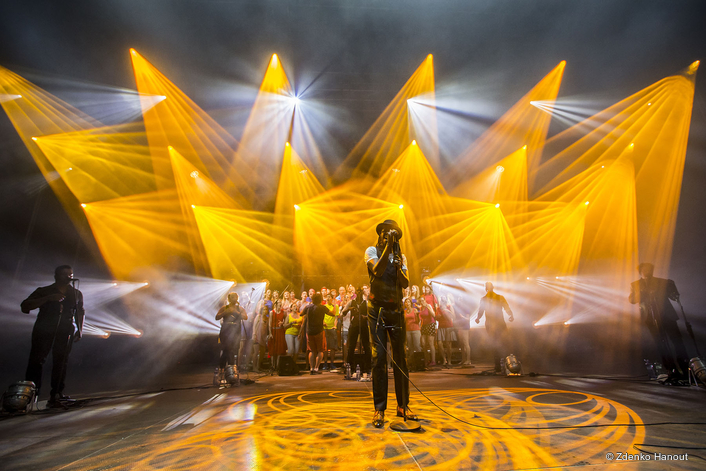 Colours of Ostrava’s technical production is delivered by SMART Productions, a company run by Josef “Pepa” Źenišek who has been Technical Director of the festival since 2011. He and his team co-ordinate all the technical elements site wide, which will often include an overnight de-rig and re-rig on the main stages to accommodate requirements from the headliners together with their ‘specials’ packages.
RentalPRO has been involved in supplying lighting, sound and video to the ArcelorMittal Stage for the last 7 years, and this year received a brief from SMART Productions who had scanned all the band riders and compiled a list of requirements.

As you would expect, the lighting was based on flexibility. They needed a good selection of choices on the ‘house’ rig for guest LDs showing up with their artists, and also enough scope to offer individual looking shows for those bands being lit by the house crew.
The kit was therefore chosen for maximum features and effects … with the list comprising 26 x BMFL Blades, 38 x Pointes and 34 x Spiiders … all bringing plenty of colour, movement and detail to the stage. 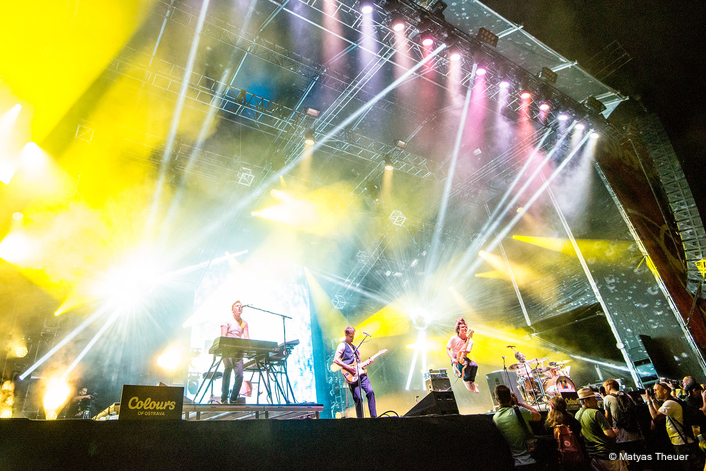 Eighteen of the BMFL Blades were rigged on 6 upstage trussing towers – with five columns of LED screen positioned in between – and three BMFL Blades per tower. Four more were on top of four floor-standing vertical trussing towers, also at the back of stage.
The remaining four BMFL Blades were positioned at the FOH tower and used as follow spots. This is becoming quite a trend right now, as the units will perfectly match the colours and quality of light from other Robe fixtures on the rig.

Fifteen of the Pointes were on the front truss, with nine – in three groups of three, ACL style - on three small sections of truss positioned between the six vertical towers at the back. Another six were deployed on the floor … with the other eight in pairs mid-way up the four floor-mounted vertical towers. This gave a really good spread of these dynamic multi-effects lights all around the performance space.
Eighteen Spiiders were rigged on the six upstage verticals, matched with the 18 x BMFL Blades on the same trusses, while another 16 were in pairs taking the top and bottom positions of the floor-based towers (with the pair of Pointes in between). The final two were on the FOH Tower for illuminating the audience.

The BMFLs were chosen for their “power, excellent CMY colour mixing system and smooth shuttering,” commented Kamil. Three medium resolution LED screens gave off a lot of ambience, and they needed profiles with serious lumens to cut through!
Spiiders Kamil loves for their wide zoom and ability to ‘blanket’ a space in colour and texture. “They are great for WOW factors and the pixel mapping adds another layer of versatility,” he says. They also work brilliantly in conjunction with the BMFLs.
The Pointes were used for what they are famous for - throwing a myriad of different lighting looks and effects onto the stage and into the audience, and for facilitating literally thousands of distinctive looking scenes which is ideal for multi-artist applications.

As with many high profile festival stages, the biggest challenges were ensuring that the overall lighting design looked good on the large stage, and also that it kept visiting LDs happy.
As it turned out, only two bands this year brought their own LDs, who were more than happy to work with a Robe rig. “Robe is now an accepted brand worldwide, that almost everyone is happy to use on their specs,” observes Kamil, who, together with his crew, lit all the other artists in the exciting and varied ArcelorMittal line-up.
Kamil is very familiar with Robe products; he uses the brand frequently and thinks it is pioneering at the moment in terms of bringing new technology to the market.

Obviously he’s very proud that it’s also a Czech brand … but knows that Robe is doing well in its home country not just due to patriotism and a very proactive sales team, but because it’s genuinely some of the best show technology on the market at the moment.
ArcelorMittal Lights were run via a Road Hog and a grandMA2 light console – LDs had the choice - and Kamil was assisted by programmer Jan Hons Šuškleb.
Robe fixtures were used on other stages including the Main with BMFL Blades and BMFL Wash XFs, ColorStrobes and Pointes; and the Electro stage featured PixelPATTs, Pointes and LEDBeam 100s.

Around the site, large quantities of CitySkape Extreme LED washes were used to illuminate the industrial structures and buildings. Pepa explains that the architectural lighting idea started when they were on the previous site in 2010, and was expanded dramatically when they moved to the Dolní Vítkovice site in 2012. The environment that it is highlighting is also changing year-on-year as the overall site is being tastefully re-developed as a cultural and creative centre.
Apart from it becoming one of the most successful and diverse festivals in Europe, Pepa enjoys working with Robe products on COO as they continue to impress him with their quality and resourcefulness. For him, the stunning industrial location, the history and atmosphere brings an additional resonance to the event. “It gives that touch of ‘extra special’ to the equation,” he concluded.