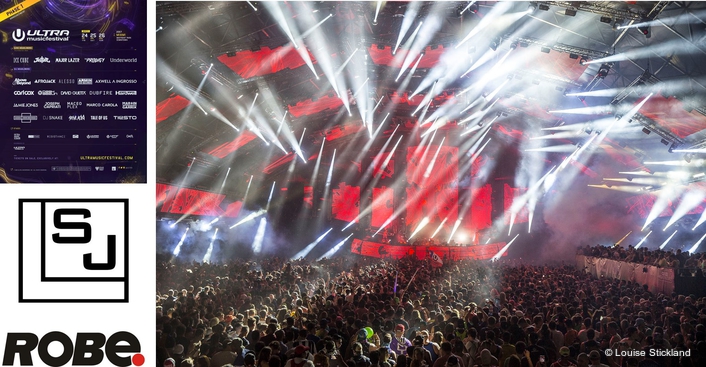 The 2017 Ultra Miami dance music festival drew a diverse line-up and some of the biggest international DJs and producers to the Bayfront Park site in downtown Miami, transforming it from a cool shorefront public space to a pleasure dome for around 150,000 electronic music fans for the weekend, enjoying the warmth, good vibes and some amazing music.

Robe moving lights were specified for four of the main performance areas – the Carl Cox & Friends Arena, Main Stage, Live Stage and Arcadia - the world’s favorite giant spider made from recycled industrial waste, which is newly lit with Robe after a major investment by Arcadia Spectacular.

The production lighting design for the Carl Cox & Friends Arena was created by Steve Lieberman of SJ Lighting, celebrating 18 years in the Ultra Miami ‘hot seat’ … the festival is 20 years old next year!

The lighting and visual design was imagineered to fit the structure. It included 19 x LED pods which followed the contours of the roof, rigged on an automation system so they could be moved into various different positions ... completely changing the shape and feel of the space.

One hundred and twenty-four Robe Pointes were on Steve’s spec … dotted all over the LED pods truss frames. The action on this stage included an energized performance by the legendary Man Himself to close Friday night

Steve – whose work is known for flair and originality - has used Robe products in designs for some time, and particularly in the last 3 or 4 years since the Pointe was launched.

He chooses Pointes for all the reasons they have become synonymous with dance music lighting – the sheer versatility and potential effects the designer / programmer can get out of the fixture! The Pointe is a powerful beam and spot luminaire that also makes a great wash when zoomed out with frost added plus the endless possibilities for funky, mesmeric effects. In addition to that, it’s lightweight, small and super-fast to keep pace with the freneticism of electronica. 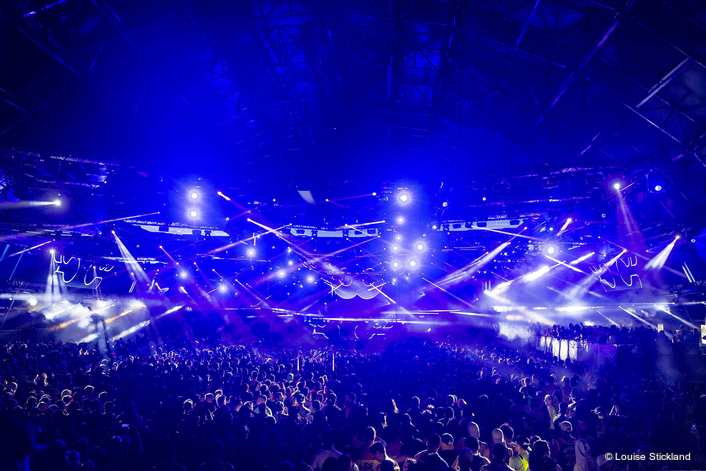 All this makes it a go-to fixture for EDM designers.

Steve himself programmed and operated lighting in the Carl Cox Arena, with Michael Seeverens from Dutch creative design house The Art of Light taking over on the Sunday to look after Armin van Buuren’s A State of Trance (ASOT). Michael – king of trance Armin’s long term lighting director – also operated for Armin’s incredible sunset set on Friday night.

Steve also designed lighting for the Worldwide Stage, another AG structure, this one measuring 60 ft wide by 192 ft long and 74 ft high, which was operated by Alex “Junior” Cerio.

Over at the Live Stage - built around the permanent Bayfront Amphitheater and extended with side PA / video wings that also created additional lighting positions - 36 x Pointes were on the house rig supplied by locally-based rental company, Paradigm Lighting.

Running the FOH here was Mike Smirka and Jim Rood, with Jorge Valdez and Omar Malpica from Paradigm providing technical support ensuring that everything ran smoothly.

Saturday night on the Live Stage was closed by a characteristically energetic set from The Prodigy, bringing their unique blend of hardcore techno with punk attitude to Bayfront Park.

UK based lighting designer Andy Hurst added 18 x Robe PATT 2013’s to their specials package, which were rigged on custom towers upstage. Their elegant retro lines brought an architecture to the stage, and they also proved ideal for the pumping excitement and anarchy of a prodigy lightshow! 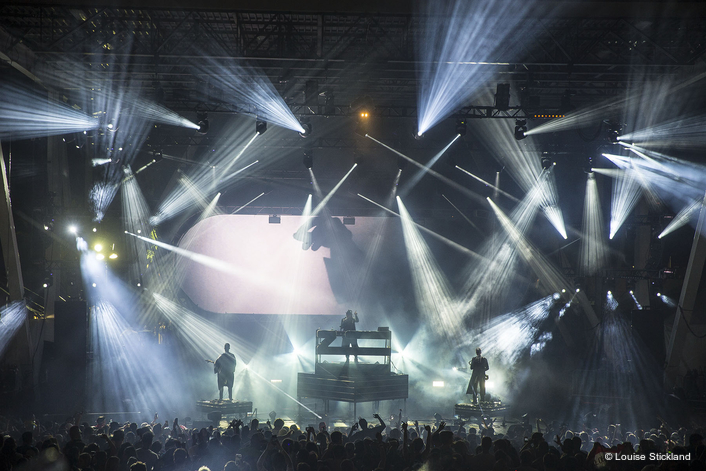 Andy’s other show on the Live Stage was Chase & Status who preceded Prodigy on Saturday for which his floor package – amongst other lights – inclined 16 x Robe CycFX 8s, four each on four towers.

Andy was also acting as consultant lighting director for Axwell & Ingrosso, working with their regular LD and programmer Dan Robinson, and specified Robe’s new UV strobes in their worldwide debut

Twenty-four UV Strobes of these were placed in a line in front of the DJ booth on the Main Stage as the Swedish duo closed Saturday night with an energized performance, sizzling hot from two shows at New York’s Terminal 5 the preceding week, their first NYC shows in 2 years.

The UV Strobe is among the brightest, best value and most sophisticated strobe-blinder effects and is ultimately controllable, configurable and arrayable. It delivers super-fast bursts of high-powered pulses that can be tweaked in frequency, duration and intensity and optically harnessed from the 60 x high power white LED chips and 60 x high power UV LED chips. 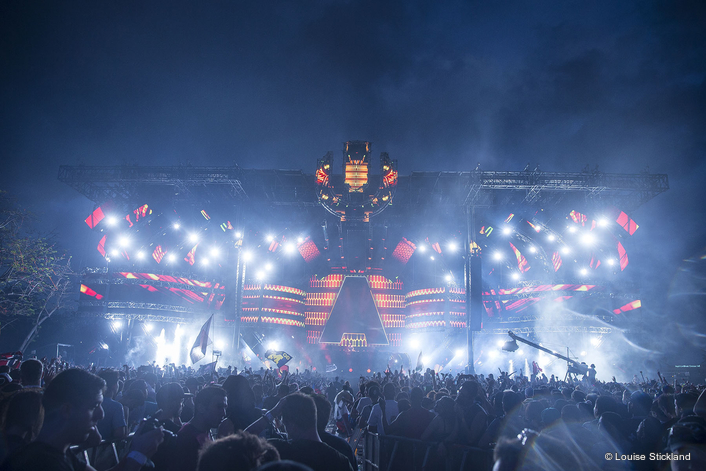 Rob, and all the other LDs with acts on the main stage – including Bas Scheij of BASZ Design and Andre Beekmans from Art of Light both from the Netherlands, lighting Afrojack and Hardwell respectively; Rob Lister for DJ Snake and Dan Robertson again, this time for Alesso - could take advantage of the 20 x Robe BMFL Spots which were part of the ‘house’ rig.

The Main Stage’s production lighting and design and the numerous the guest LDs were looked after by Patrick Dierson at FOH. The lighting equipment was supplied by Solotech and the massive amount of LED screen, used to create an impressive sculptural set, was supplied by Screenworks.

The world’s best loved spider - all 55 ft. tall by 60 ft. wide and 50 tonnes of industrial art and ingenuity - made its presence felt, juxtaposing an outdoor performance spectacle and the pumping rhythms of rave culture with the glitzy concrete of Miami’s hi rise skyline …

… Arcadia Spectacular returned to the festival with their immersive party, this year with its fantastic new lighting rig. 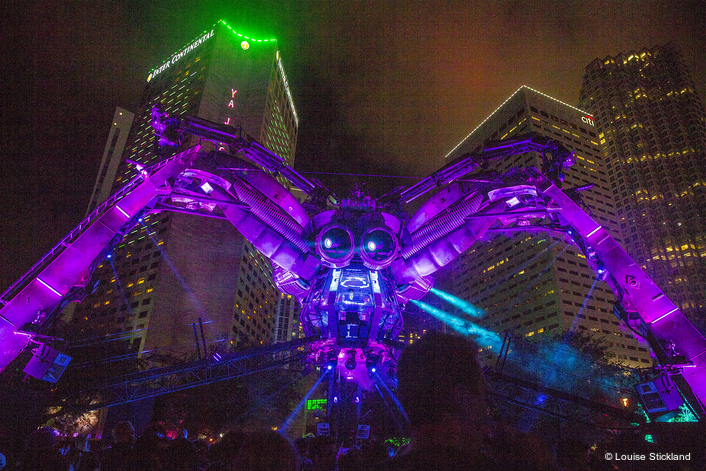 With all technical aspects looked after by production manager Tim Smith and his team, right at the center of the spider’s lighting rig are 16 x BMFL WashBeams – six used for the three sets of spider eyes, complete with custom ‘Halo’ rings. Twenty Pointes are rigged on the three legs and under the spider’s belly ... and then there are nine LEDWash 600s which multi-task during the Arcadia show lighting the aerialists and other aspects.

Large quantities of Anolis architectural LED fixtures – from Robe’s sister company - are used to illuminate different parts of the spider’s body including the crane arms on top and the DJ booth that forms the core of the body.

All this was part of a major equipment investment by Arcadia in 2016. 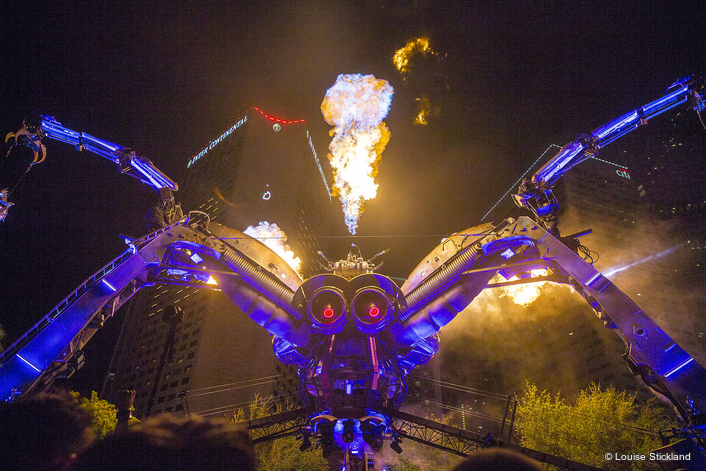