Robe Can Be Itself on Sheryl Crow Tour 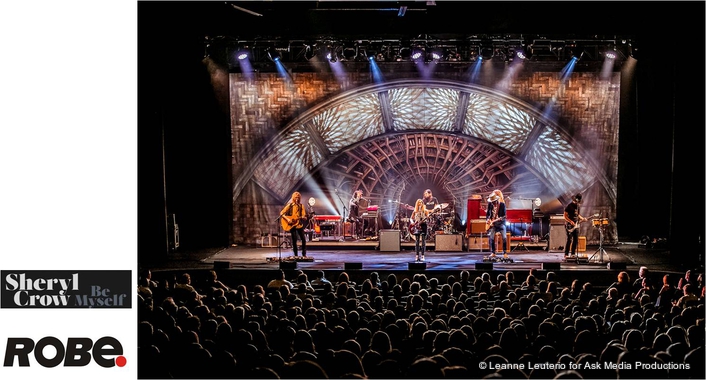 Multiple Grammy Award winning singer songwriter Sheryl Crow is on the road with her new ‘Be Myself’ album, together with a brand-new lighting & scenic concept created by LD Jeremy Roth which includes Robe Spiider and BMFL Spot moving lights. Jeremy landed the gig after production manager Rick Purcell saw his designs for the current tour by Chicago alt-rockers Wilco … and made Sheryl aware of his work. They and her management team all wanted a more theatrical presentation that was based on soft scenic elements.

This provided the starting point for the design, together with extensive discussions between Jeremy and the artist about how stage aesthetics related to the vibe and direction of her album. Lyrically, the new songs deal with a disconnect in relationships fueled by excessive electronic communications and over-exposure through social and other media distracting from real interactions.

Sheryl wanted to create a regal performance space that looked to have become distressed over time while Jeremy was keen to work with Valerie Light and Infinite Scenic again - who made his Wilco forest set. After extensive brainstorming, all agreed on an old railway station as the environment, with gothic stained glass windows creating an archway to serve as a mid-stage portal, with a tunnel of rusty pipes trailing off into the distance behind.
Using coated gauze material for the stained glass and a selection of back-painting techniques on the tunnel backdrop allowed these surfaces to be back-lit to create dynamics and effects throughout the show.

The emphasis on the soft scenery also influenced Jeremy’s choice of lights which included the 22 x Spiiders and eight BMFL Spots amongst others.

The BMFLs were chosen for their “fabulous set-up for animating gobos” explained Jeremy, which does all the surface texturing of the portal windows and tunnel backdrop. 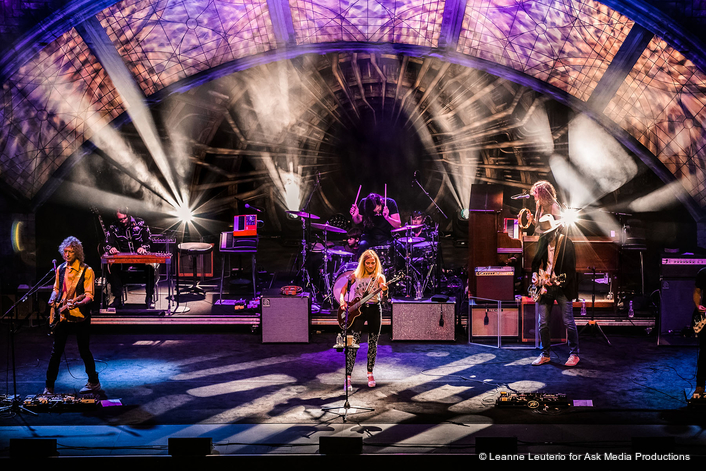 The dual animation discs, on their own, create a specific moire effect which he thinks is “really stunning” and also rare in a moving light. Adding gobos in front of that and altering the focus creates many subtle patterns and movements. “Then you can take it up a step and add one of the two prisms and get an even greater array of effects,” he commented.
In this show, the BMFL’s primary role is texturing and grading rather than aerials and, with this in mind, he changed out some of the original gobos for custom patterns from Rosco and Apollo. 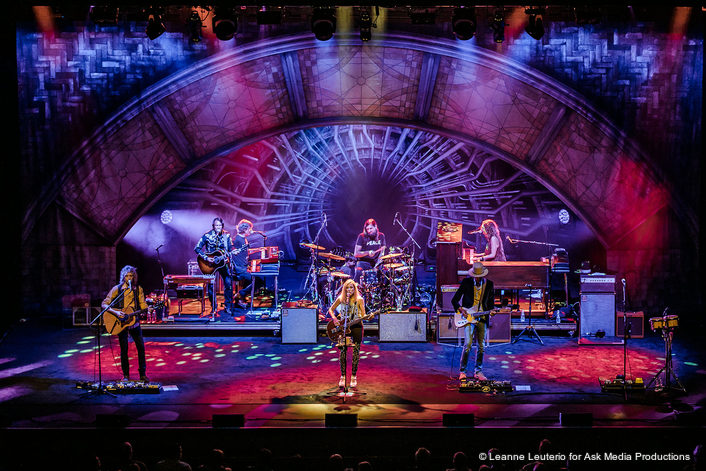 The super wide zoom, the brightness and the smooth dimming are all “a must” for making this technique work he confirmed. He likes the fact that the color is homogenous when used in an open beam but “shows great ‘fringing’ (tiny variations of analogous color) when used with certain gobos at the right focus.”
He initially looked at the Spiiders for their pixel mapping capabilities and Kling-Net compatibility, however with only a 12 ft. section of available truck space … he also had to keep his fixture count to a minimum so every light on the rig has to give as much variation as possible.
He wanted to create movement in the backlight washes without necessarily having to rely on pan & tilt actions and he also wanted to do some color and intensity effects that were not easily achievable via console programming, which is why he decided to integrate an ArKaos media server into the system. 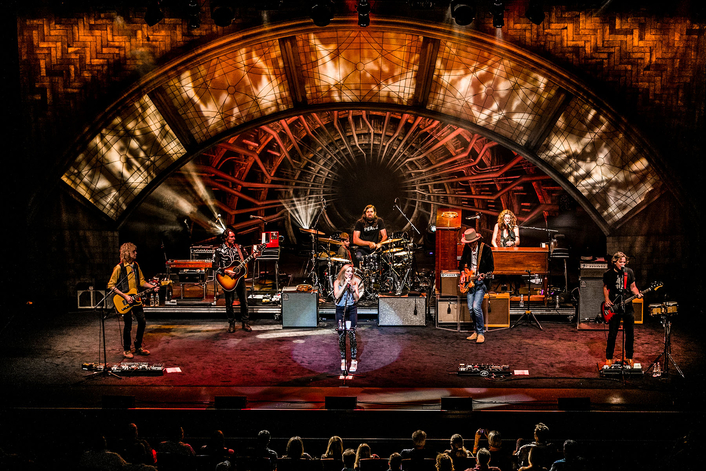 The whole process of mapping and feeding media to the fixtures over Ethernet / Kling-Net “was simple to set up and works brilliantly for the show.”
Spiider has now become his new favorite LED wash light.
“The color is excellent all the way through the whites to pastels to saturates. The dimming is superb, especially when in tungsten emulation mode and the size weight and price are all very attractive.”
He thinks the moonflower effect is “really stunning” and has found lots of places to use it in the set. The effect mixes well with the wash output to create a ‘hybrid beam’ that is unique to the Spiider. 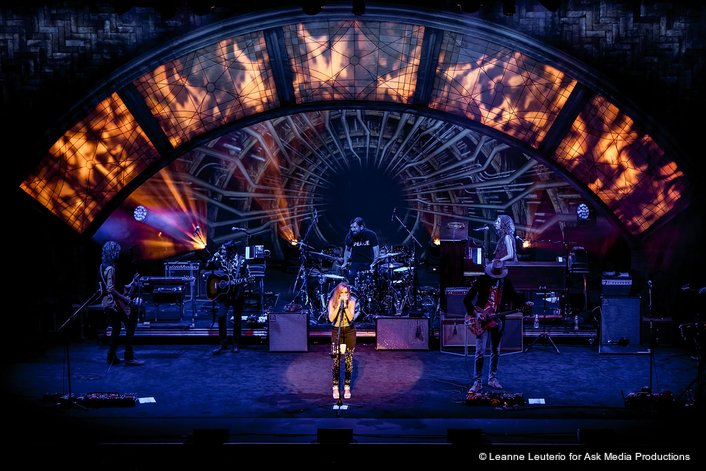 The rig layout features a downstage truss for front light, LX1 for high side color wash positions - with seven of the Spiiders here; an LX2 accommodating another six Spiiders, profiles, six-bar battens and the mid-stage portal drapery.
Two BMFL Spots and two wash lights are upstage on LX2 which also provides a location for front lighting the tunnel backdrop.
LX3 is rigged with 4 x BMFL Spots for rear projection effects onto the portal windows and also has three Spiiders for backlighting the drum and keyboard risers.
Another six Spiiders, four profiles and three Molefeys are on the floor to the sides of the band for low level and up-lighting angles and there are two wash lights and 2 x BMFL Spots behind the backdrop taking care of all the rear projection effects. 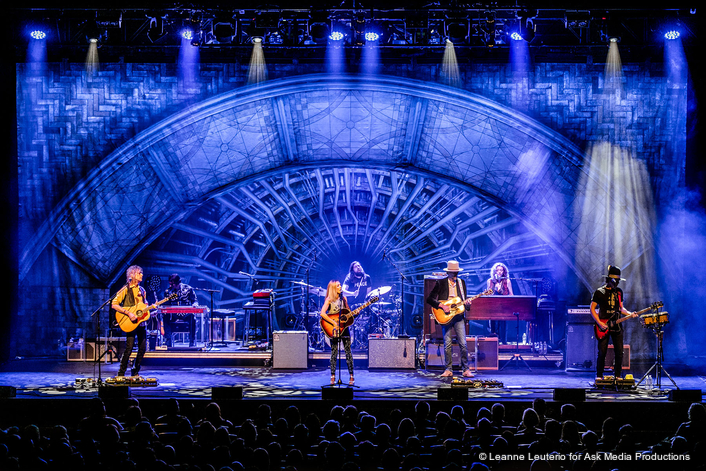 The biggest challenge so far on the tour has been keeping the fixture count down to a bare minimum, while having enough to light all the scenery and the band well and with plenty of variety. The entire rig fits into 12 ft. 3 inches of truck … and thankfully the band uses in-ear monitors, so there’s no space taken up with wedge monitor cases, otherwise it might have been even less!! High fives to the Noize Boyz on that one!
The other parameter was that the rig had to be straightforward to set up by Jeremy working without a tech!
US vendor TMS did a great job on the prep. He said, “Account handler Holly Russell is incredibly supportive and has bent over backwards numerous times to get my tours out the door exactly as I need them – and I am very particular!”

It was the first time Jeremy has had the chance to spec Robe products on a tour, apart from some PATT 2013s on Wilco a couple of years ago, although he has encountered Robe on plenty of festivals and other shows.
“I love how Robe has upped their game recently and are really listening to user feedback.”
The show is running on a grandMA2 console programmed by himself and Megan Metcalf, with an ArKaos media server to pixel-map the Spiiders.

Jeremy Roth is based outside of Portland, Oregon and has been a lighting professional for 20 years. His interest was first sparked in his high school’s auditorium and TV studio, where he was working with and learning from local professionals as a teenager. He went directly from school productions to working professionally as a lead lighting tech and programmer with lighting designer Steve Harper as a mentor. At 18 he was already actively engaged with most aspects of production – drafting, client meetings, fixing kit, prepping shows, leading crews, programming and operating. More recently he has worked with Simon Clark as a principal designer for Stageworks and has enjoyed life as a successful freelance LD and programmer with clients like Wilco, Mazzy Star, Nathaniel Rateliff, and Edward Sharpe amongst others.

A Little Night Music for Robe at RADA
A Pointless Achievement For Robe LEDWash 600s!
Afrikaans is Groot for Robe