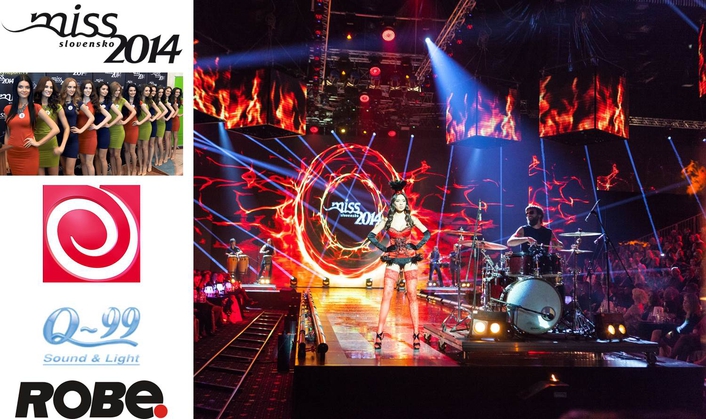 .
Lighting Designer Martin Kubanka knows how to make many things look beautiful with his stunning lighting and visual designs, and this coupled with the Miss Slovakia beauty pageant as the subject matter and 150 Robe moving lights on the rig made this 2014 edition of the event extra special.

The show was staged at the Incheba Exhibition Centre in Bratislava, produced by live communications agency Forza and broadcast live on TV channel JOJ as well as being enjoyed by a live audience of 3000. Technical production – lights, sound and video - was supplied by Slovakia’s biggest rental company, Q-99. 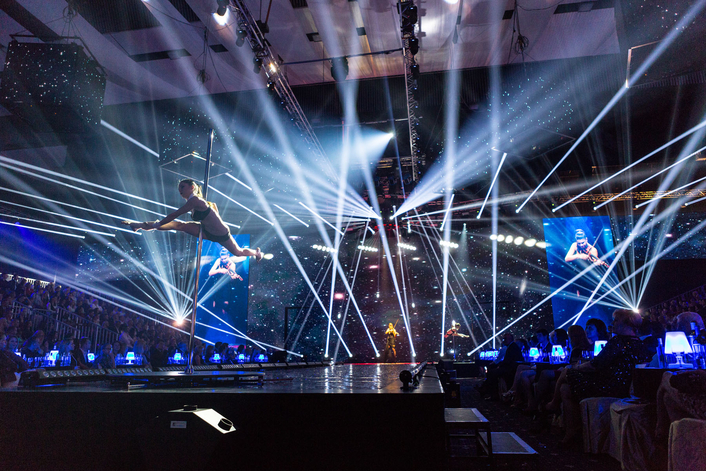 Kubanka drew on his vast experience of designing stage lighting and video for televised beauty pageants and took things to a different dimension for this one, creating great aesthetic results that impressed a new production and realisation team.

The brief was to light in a sophisticated and classy manner, the main purpose being to highlight the 12 contestants and let them take centre stage, whilst creating an exciting and vibey atmosphere as a backdrop.

In addition to the competition, there were several live performances including dance troupe The Pastels, Miss Slovakia 2013 Karolina Chomistekova who played a violin piece and popular Czech singers Daniel Kraus and Janek Ledecky.

Daniel Ŝichman’s set design featured a long runway coming out into the audience, and in the roof, the lighting trusses also mimicked this shape.

There was a 43 metre long back truss, used for all the main contra and effects lights and also for hanging some of the LED screen elements which were also an integral part of the design.

Eighteen metre long trusses were installed above the runway, with 19 metre ones running down each side of the audience. Above the stage was a 4 metre diameter trussing circle and above this, a Parasol STAR600 rotating truss system – one of the main lighting centrepieces for this year – and loaded with Pointes and LEDBeam 100s.

Q-99 first saw the STAR600 demonstrated on the Robe stand at Prolight+Sound 2014 – and purchased one shortly after for their hire stock! 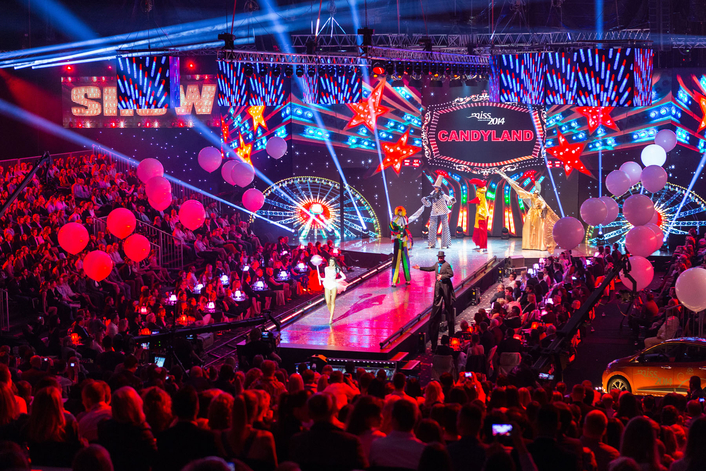 On the back truss were 22 x Pointes, six of the LEDWash 1200s and six MMX Spots. The side (audience) trusses were rigged with seven Pointes and eight LEDWash 600s each, and above the catwalk were 30 of the LEDBeam 100s, four MMX Spots and the other four LEDWash 1200s.

The STAR600 featured 12 x Pointes and 12 x LEDBeam 100s which spun (?) into different positions during the show and created plenty of WOW factors!

On the floor were the 12 remaining Pointes, lined up at the back.

Kubanka explained that they used the Pointes as the only ‘effects’ lighting throughout the show, and with their multi-functionality he had more than enough scope to create many different and individual looks for all sections of the show.

The MMX Spots were used for contra lighting and key lighting onstage, illuminating the jury and as fillers for the cameras; while the LEDWash 600s and 1200s worked brilliantly for overall stage washes, contra-lighting into the audience and as in-camera effects – where he often used the individual ring control. The LEDBeam 100s provided fast and bright specials.

Q-99 purchased their Pointes soon after their launch last year, and Kubanka – the country’s leading TV lighting designer – now uses them on most of his major shows. Among his favourite functions are the very accurate CTO, the super-fast speed and the great prism effects which produce very dynamic multiple beam and splatter effects … among many others. 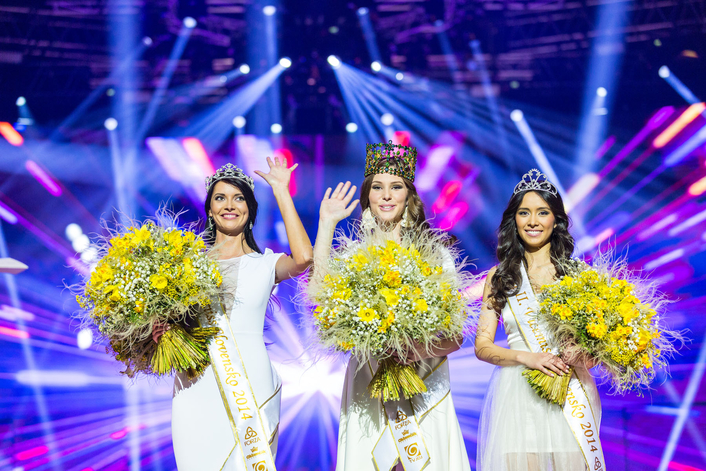 Kubanka programmed and operated the lighting on a grandMA2 full size – his console of choice and the LED and effects video was operated by Michal Brna using a grandMA2 light console and an MA VPU. The show was directed by Tomáš Eibner and the DoP was Vladimir Ďurčanskŷ.

Eighteen year old Laura Longauerová was crowned Miss Slovak Republic 2014, and will go on to represent her country in the Miss World 2014 pageant later in the year.

Robe Gets Smart for Čo Ja Viem?!
Q-99 Makes A Pointe
Robe Runs With The Best at Sportovek Roku