Robe BMFLs for TransAlta’s Grandstand Show at the Calgary Stampede

Robe BMFL Spots and Blades were an integral element of the lighting scheme designed by Pierre Marleau of Orange Frog Productions Inc. for the Grandstand concert stage at the 2015 Calgary Exhibition & Stampede, arguably the world’s most famous rodeo, exhibition and festival held annually in Calgary, Alberta, Canada.

Pierre, based in the same city, has been a lighting professional for over 25 years, starting his career in the world of theatre and musicals, with which he has toured worldwide. He’s been lighting the Stampede’s Grandstand Show for the last 19 years which sees a line-up of international artists play in front of 20,000 people nightly for 10 days plus a preview evening. 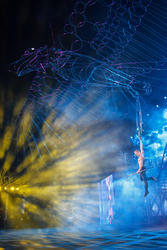 The lighting equipment was supplied in collaboration with BML Blackbird of Secuacus, New Jersey and Stagelite from Winnipeg, Canada working a joint venture initiative project, managed by VP of Concert Touring, Tracey Ploss.

Pierre collaborates closely with the video designer of the Grandstand shows each year, and with the addition of a substantial LED video wall for last year’s event, this year he wanted to make sure he had the most powerful lighting fixtures available for maximum impact … so he specified 60 x BMFL Spots and 6 x BMFL Blades.

They were used as the basic ‘building blocks’ of the rig, positioned on the back and FOH trusses and also on the stage floor as footlights and specials, helping to construct the fundamental look for every cue.

The stage is a 100ft wide x 30ft deep mobile platform complete with trusses, which travels a quarter of a mile from its storage location into the show position – and back - each night.

When it reaches the stage, it is docked with an existing stage that is permanently in place via a series of hydraulic arms. Around 80% of the lighting is rigged on the mobile section.

Pierre specified BMFLS for “the brightness and quality of the optics, the light weight of the fixture and the gobos selection.” It was the first time he had used BMFLs on a show and was very impressed, especially with the speed of the fixtures. 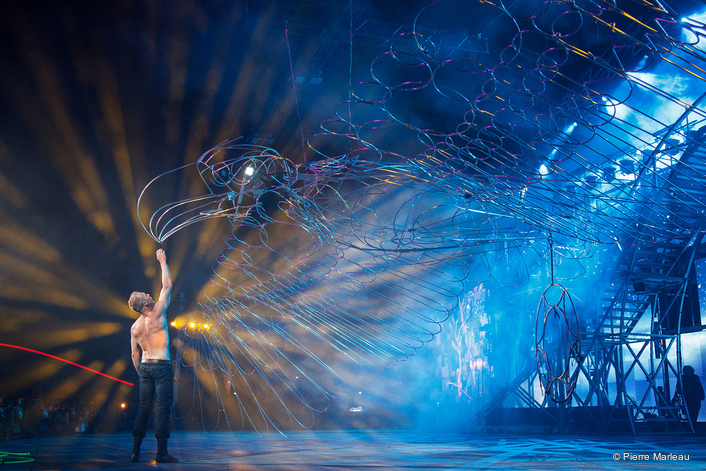 His company, Orange Frog Productions Inc. owns a small quantity of Robe LEDBeam 100s – which were also used on the show – and he started utilising Robe products in his work about three years ago.

Tracey and the Blackbird / Stagelite crew saw a demo of the BMFL from Robe’s US office. “It was bright, fast and had all the features that Pierre and the Orange Frog team were looking for,” said Tracey, “it was the right light for cutting through the video wall and still delivering visible beams and shafts of light to the stage.”

He further commented that even in the middle of the day in the bright sunlight, they could still see all the colour from the BMFL onstage – even in Congo blue!

“Small, light, fast and all those features … what more can you ask for?” concluded Tracey.

They weatherized the fixtures with special tub housings and fan covers, which combined with Robe’s robust engineering ensured that there were no failures throughout the show period.