Robe BMFLs More than A Whisper on Passenger Tour

.
UK based folk singer / songwriter Passenger’s recent Album tour campaign, “Whispers”, is drawing to a close with the acclaimed penultimate leg of the tour in Australia, featuring a show design by James Scott of UK based visual design collective ‘Okulus’, a new collaboration with LD / Visuals designer Louis Oliver.

In Australia, James was able to take advantage of Robe’s latest BMFL Spot moving lights for the first time as part of the rig, which were supplied by MPH Australia, a leading lighting rental specialist.

The BMFLs were used extensively throughout the performance for key and back lighting, with some positioned on the floor for eye-catching ‘aerial sculpture’ moments.

It was the first time that James had used BMFLs on one of his own shows – having first seen them demonstrated by Robe UK’s Amy Schofield at Hammersmith Apollo, where the UK leg of the tour ended with two sold out shows. As soon as he saw the capabilities, he was keen to incorporate some units into the show … for which he had to wait until Australia!

He was delighted with the results and loves the crispiness and clarity of the optics and zoom range … amongst many other features, and his expectations were definitely “Exceeded” once he had a few gigs under his belt.

The Passenger show included subtle projections onto five upstage gauze columns, and James found himself having to inhibit the BMFLs down to make sure that the projection wasn’t washed out by their extreme brightness … even when using the darkest and most saturated colours.. in the lowest lamp power mode…

Eight BMFLs and six 600 LED Washes were floor mounted on eight different height white wooden plinths positioned in an arc surrounding the down stage mic position. With three more either side of the stage on booms at the front providing main key lighting onto the artist. 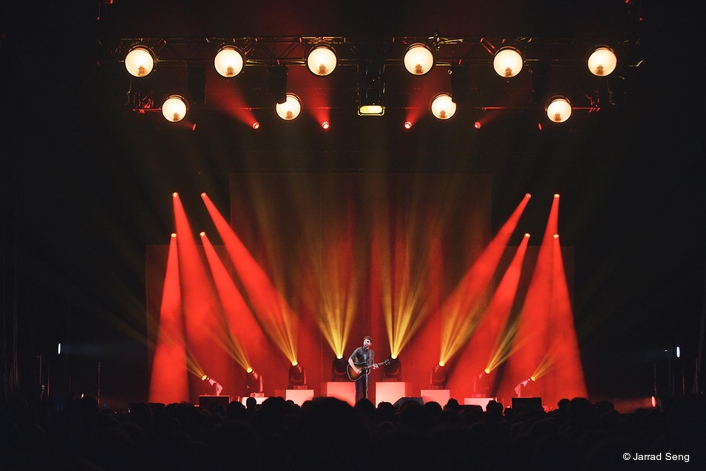 “The LEDWashes are a very flexible fixture, they are ideal for key light because you can force virtually any colour out of them and still maintain good skin tone for the cameras,” he commented, also recalling a DVD shoot earlier on the tour at London Hammersmith when the camera crew and DOP were looking at the key-light and, seeing it was LED, ordered a set of conventional profiles as back-up!

As it turned out, with the quality and flicker-free operation of the LEDWashes, the conventional profiles weren’t even taken out of their boxes!

Designing the Passenger tour was an intelligent and precise blend of lighting and video. Lighting needed to augment and work alongside the projections whilst also be powerful enough to kick in and change the whole feel of the performance space when the video was not running. With 22 x BMFLs in the rig, James had all the tools he needed to ensure this happened with finesse and to great effect.

Passenger’s video content was created by Sarah Larnach, who also produced the album artwork and all the drawings and media was formatted by Lydia Baker of Screen Light Design in the UK and run from a Catalyst laptop provided by Meadia which did the whole tour.

Lighting was programmed on a grandMA Command Wing which also travelled with James and the touring crew throughout the seven month world tour.

In Australia, MPH’s lighting Crew Chief was Michael Parsons. James said, “Michael and the MPH team were fantastic – it was a real pleasure to work with all of them”. 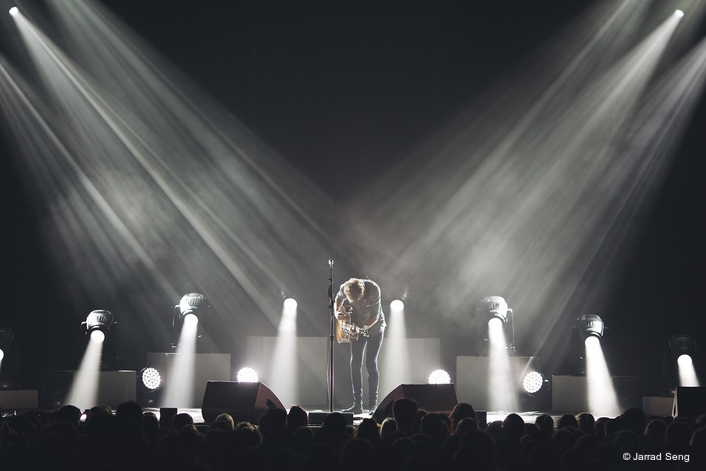 MPH has invested heavily in Robe moving lights and has just taken delivery of its second batch of BMFLs in January, making them the largest stockist in the country right now! They were supplied via Robe’s Australian distributor ULA Group.

The Passenger tour started in summer 2014 with the launch of the ‘Whisper’ album, and most of it has featured Robe moving lights, including the three month UK and European section, with MMX Spots and Robe 600s supplied by rental company Siyan.