Robe BMFLs ‘on the Record’ for Die Fantastischen Vier Tour 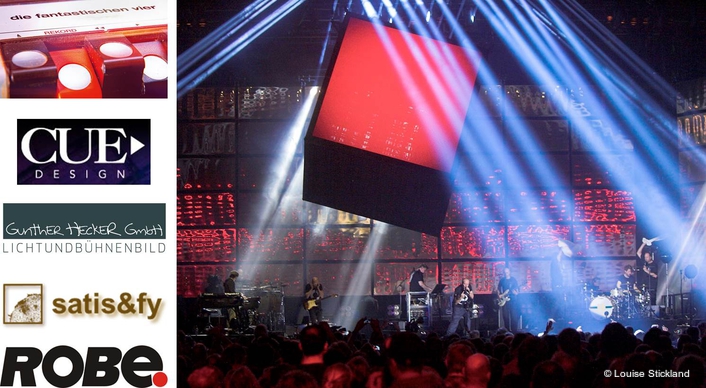 When Gunther Hecker’s name is on the design credits for a show, you know it’s going to be visually interesting, idiosyncratic and a bit ‘out-of-the-box’ with a few flourishes of the unexpected ... and so Gunther has created another epic stage, set, lighting and video design for maverick German hip-hop band Die Fantastischen Vier’s latest – and current – “Record” tour.

Gunther is working closely with Lighting Director and FOH Systems Engineer Marc Lorenz on this tour, with the ‘Fanta 4’ celebrating 25 years at the top of a massively successful career.

Robe’s busy reporting team caught up with the tour in Stuttgart’s 15,500 capacity Schleyer Halle where the band played three show-stopping homecoming gigs which were also recorded for a forthcoming DVD and live 4K streamed to the ARRI cinema in Munich as well as to the Sky Select TV channel in HD – allowing thousands more fans to enjoy the spectacle (see F4 Meets 4K)

The tour’s design concept originated from five major European festivals headlined by the Fanta four in summer 2014, which worked very well and was developed by Gunther into a full touring version for ‘Record’. The set started off on a raw, bare stage with whatever the venue happened to have as a backdrop at the back, which was transformed about half way through as three mirrored ‘walls’ rose up from nowhere - on a Cyberhoist system - to line the stage in golden mirror material. 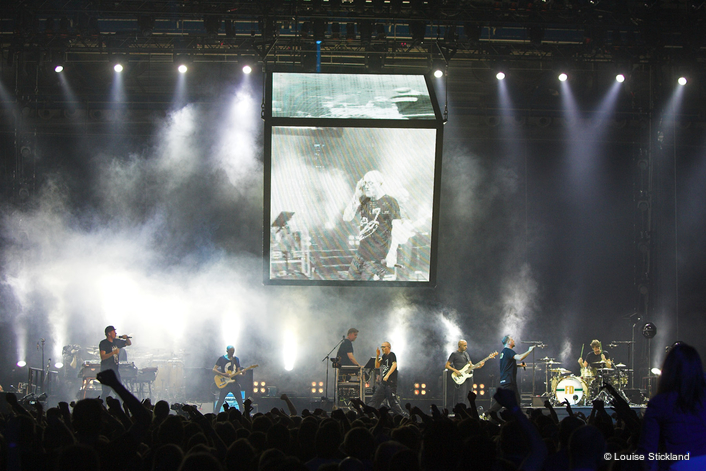 This is a complete surprise, and is adeptly used as a bounce and refraction surface for the various light and video sources.

Another visually striking element is the 4 metre square 6-sided LED video cube floating above centre stage which can move on all axes – up, down, left, right and rotate. Populated with Radiant 18 Hybrid LED screen – a standard medium 18 mm pitch tile with 32 x 32 pixels per panel, and 4 x 4 higher brightness (7700nit) low resolution pixels embedded in the same panel. This is used for some ‘conventional’ video playback and IMAG footage other material enables it to work as a lightsource in its own right.

In front and to the sides of the stage are two semi-transparent 8x4m Mirage IMAG video screens that can track across the stage. 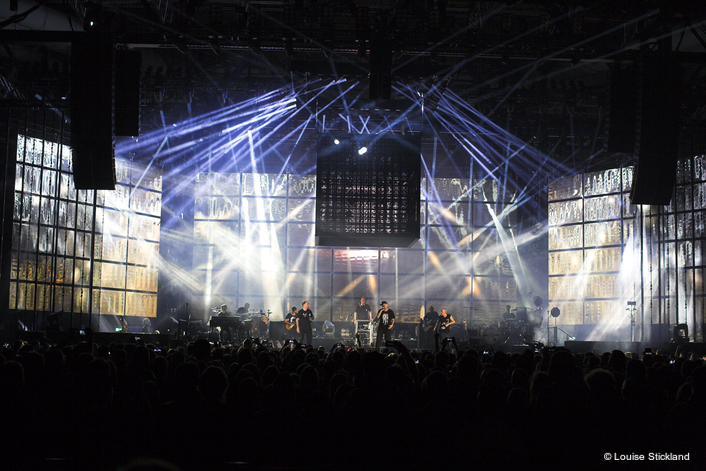 The contrast of the bare / mirrored surfaces, the LED screens and the lighting are woven carefully together to produce a fabulous dynamic and multi-layered visual environment for the band to perform.

The 50 x BMFLs are fundamental to the show and dotted around the over-stage trusses, together with the 68 x ColorWash 2500E ATs. The 12 x ColorSpot 2500E ATs are used above the B-Stage which is immediately behind the FOH area and where the band make their entrance at the start of the show.

The 60 x LEDWash 800s were rigged on a series of audience trusses brought in as additional lighting for Stuttgart, primarily for the DVD shoot. 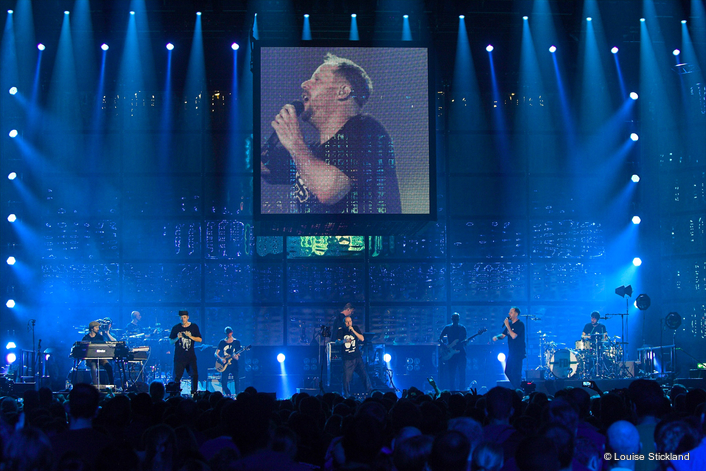 The 40 x Pointes are used – sparingly but with maximum impact - to frame the video cube during strategic moments. Their high-clarity beams were also used as very effective bounce-sources fired off the mirrored walls creating some cool and quirky aberrations with the light, very much in Gunther’s imaginative oeuvre.

Gunther decided to use the BMFLs back in the summer when he first saw the prototype units in action. Having been a long term fan of Robe’s classic ColorSpot and ColorWash 2500E AT luminaires – for their power and impact – the BMFL with its incredible brightness and long throw capabilities, immediately appealed.

“I needed something bright and with a very fast shutter/dimmer,” he explains, “To help me create a BIG picture”. With a 30 metre wide stage, 14 metres deep and with an 18 metres trim in the big venues … powerful lights were a must. He re-emphasizes the need for a fast shutter/dimmer system to suit his style of lighting for the Fanta 4 – for whom he’s worked for 22 years - and he also likes the BMFL colour mixing. 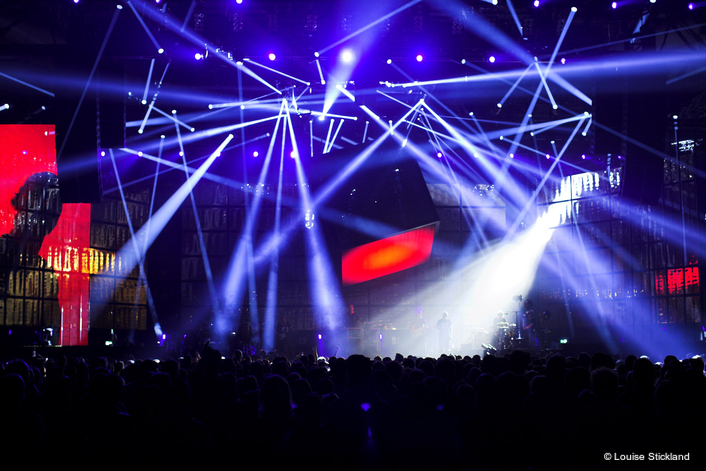 Marc Lorenz comments that the large, fast zoom and lightning-quick movement makes the BMFL unique, together with the “Amazing” brightness which is ideal for arena sized shows.

The highly adrenalized show is full of dramatic contrasts in lighting. One minute the space is filled with huge fat beamy looks embracing the entire venue, and the next the stage might be closed right down with a glow of light emanating from one of the video cube surfaces complimented by soft lighting on the band light from a BMFL focused on one of the mirror walls.

Gunther also co-ordinated production of the video playback content which has a ‘record’ theme – it’s both amusing and informative - and slots seamlessly into the show. It’s clear that considerable thought has gone into running this as a ‘mixed media’ show rather than two segregated lighting and video disciplines.

Gunter operates the lighting from a Hog 4 console. 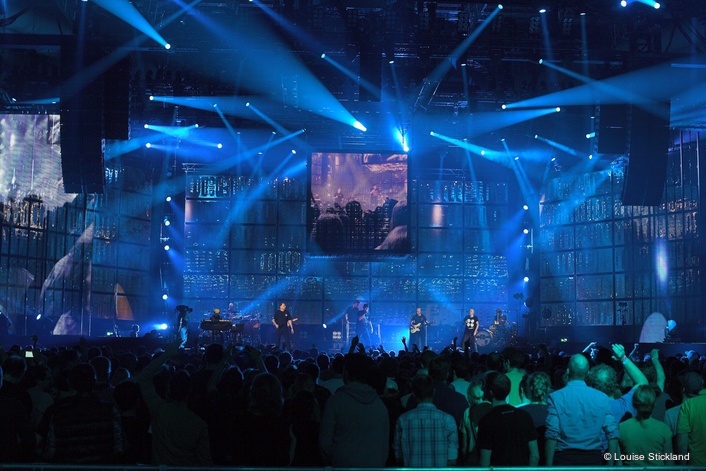 Video is played back using a custom combination of Quartz Composer and Resolume Arena developed by Marc and Gunther, where the Quartz Composer parts had been programmed from band member And.Ypsilon. And.Y also programmed MIDI-cues into his sequenzer-setup so that visuals and effects can be triggered by him from onstage to timecode or activated by Gunther via the Hog 4 or from the local FOH MIDI control console. This allows the flexibility of having both tightly cued video or for it to be run more organically – all decisions that Gunther can take spontaneously as the show unfolds each night.

All lighting equipment is being supplied by leading international technical solutions provider Satis&Fy, co-ordinated through their Werne office in Germany.

The tour continues throughout January 2015 and the Fanta Four will play festivals in the summer.