Mike, who has been a lighting professional for over 30 years, has lit the hugely successful chart topping singer-songwriter’s shows since his first headline tour in 2001. In that time he’s seen the whole visual concept for the live show evolve and change, with the main objective now being to create big impressive yet simple and straightforward looks, “It’s more about the music than a load of lighting fluff or gags” he states.

The BMFL WashBeams were purchased by Morris Light & Sound of Nashville, which coordinates technical production for Chesney’s annual tours.

They are positioned on empty seats around the side of the stadiums (not sold as they are at 90 degrees to the stage), from where they can throw all the way to the back bleachers and around the venue.

It’s the first time Mike has used any Robe products in his work and he’s pleased with the results, “In an initial test we found BMFL WashBeams to be a perfect light for this purpose due to their flat beam field, shuttering and long-throw capabilities,” he explained.

Lighting for the tour was programmed by Mark Butts and is being looked after on the road by lighting director Phil Ealy. 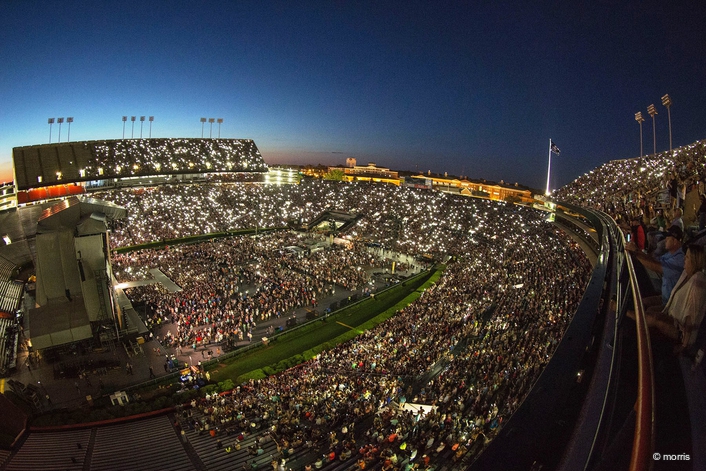 The most challenging aspect of lighting the show, reveals Mike, is “Illuminating all the fans without being offensive or too in their faces, thereby giving Kenny the look he wants for each show”.

Every stadium requites a unique set up of the BMFL WashBeams to achieve this, requiring a detailed out-of-the-box approach rather than something more standard!

“Robe seems to have a big hit in the BMFL line” he commented.