Robe’s BMFL Blade fixture continues to be a popular choice for designers of large scale ceremonies and events needing some serious power and effect – the latest being the Opening ceremony of the 2015 All Africa Games in Brazzerville, Republic of the Congo (République du Congo).

French based creative event production designers Concept K were brought on-board by the With Up agency and commissioned to create the event’s lighting and visual design – which also included eye-catching projections onto the field-of-play at the 60,000 capacity Stade Municipal de Kintele venue.

The overall event production company was Richard Attias & Associates. Jérôme Pasteur  was the chief project manager for With Up and the OC show was directed by Fanny Moreau. 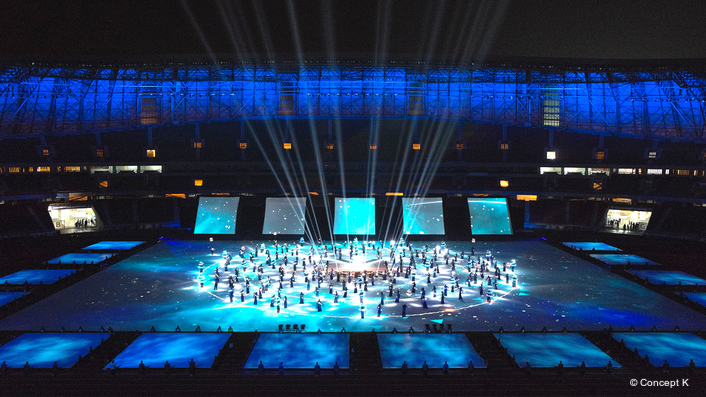 As soon as the job was confirmed, Concept K started thinking about the best lights to realize their design, and project lighting designer Jean-Francois Bonnement first suggested BMFL Blades for all the long throw work in the stadium.

Robe Lighting France then made sure that the BMFL Blade units were available for various tests, which included a session ‘in situ’ at the Parc des Princes football stadium in Paris. 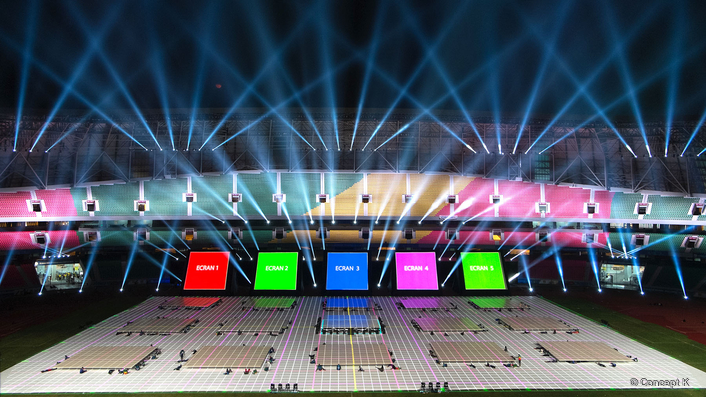 “I was very interested in the brightness and throw capabilities as well as the range of effects,” commented Jean-Francois. “I thought this light would suit the environment really well”.

Concept K LD Christophe Roirand also recommended that they specified the 32 x BMFL Blades for the Opening Ceremony, and explained that as there wasn’t time to test every aspect of the light at the Parc des Princes … he was very pleased when they saw the wash capabilities of the fixture with the frost filter added during set up and technical rehearsals in Brazzerville.

“We were confident all along that it was the right light, but this really confirmed that we had made the right choice”.

The BMFL Blades were purchased specially for the occasion by leading French rental company Dushow which delivered all the lighting equipment for the Opening Ceremony.

The BMFL blades were part of the top layer of lighting right around the stadium roof and used for shooting powerful beams and creating stunning effects into the fabulous Congolese night sky – complimenting the stars on an amazing African evening!

At other times they were directed downwards onto the pitch and the performance area to light 15 special 10 x10 metre mobile trucks being used by actors, dancers and cast. The precise shuttering of the BMFL Blades enabled these areas to be tightly and accurately defined so they stood out from other action taking place around them. 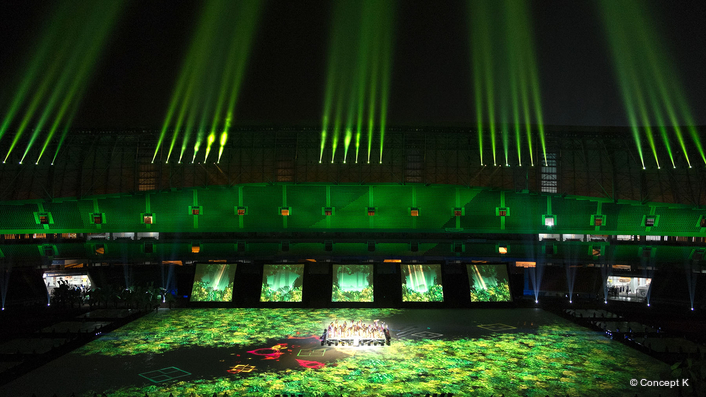 At some stages, the BMFLs had to be pulled right back in intensity to ensure they balanced perfectly with the pitch projections.

The lighting was operated for the event by Concept K’s project manager and senior programmer Alex Bucher using a grandMA2 console, who was also really impressed with the way the fixtures handled.

In addition to the BMFL Blades, 60 x Robe Pointes – another recent purchase by Dushow – were deployed around the lower rings of the stadium and used for the fantastic sharp beam effects at which they excel. They were also used for key lighting onto the cast of performers.

The 2015 All African Games saw over 15,000 athletes from 54 countries compete in 22 different disciplines over two weeks of sporting action. It was also the 50th anniversary of the quadrennial All African Games … returning to Brazzerville for the first time since the very first one in 1965.

The Dushow Group has now purchased a total of 115 BMFLs – a mix of Blades and Spots – all delivered by Robe Lighting’s new French subsidiary. 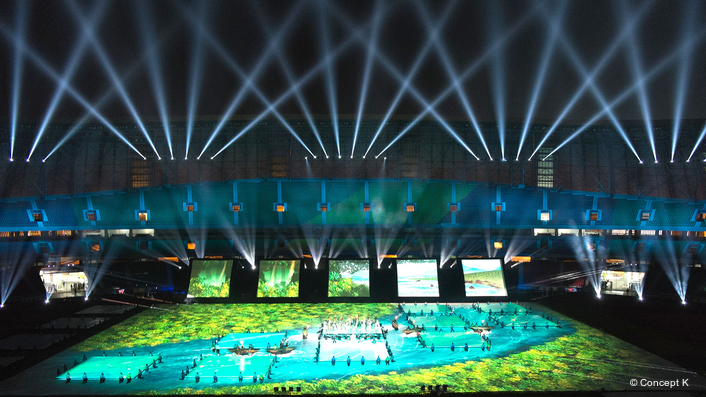 Nearly 500 Robe BMFLs were used on the Opening and Closing ceremonies of the 2015 South East Asia (SEA) Games in Singapore; BMFL Spots were also used a few months ago on the OC of the 2015 European Maccabi Games in Berlin, and the BMFL Spot – the first in the range to be launched - made a world debut on the 2014 Glasgow Commonwealth Games OC in Scotland.