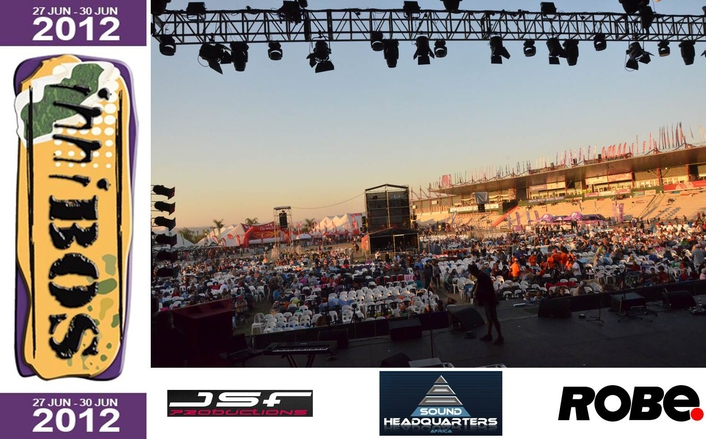 The festival recently won a KykNET Fiestas Award for 2011’s Best Festival
Robe moving lights were again at the hub of the lighting action for a Main Stage design by Johan Ferreira from JSF Productions at the popular 2012 Innibos Festival in South Africa.

The four day arts and culture extravaganza, held in Nelspruit at the Bergvlam School Grounds, was attended by 120,000 people. Technical production for the Main and Klipdrift stages was supplied by Martindale, Gauteng based rental company Sound Headquarters, and it was Ferreira’s seventh year of designing the lighting!

With the additional resonance of the Award win, more audience were expected and the organisers wanted to generally up the ante on the look and feel of the event and in particular the Main Stage, so Ferreira set about designing something special.

Each day the Main Stage hosted between 7 and 10 artists  including Juanita du Plessis, Steve Hofmeyer, Snotkop, Theuns Jordaan, Riana Nel and numerous others, so the pressure was also on to make all look individual and deal with a wide variety of musical genres.

Ferreira’s approach was to bring a theatrical look to the stage. Although much of the show is improvised, it’s imperative to him that everything looks programmed and pre-planned down to the finest details. “There’s no reason a large outdoor stage can’t resemble an intimate and personal theatrical space,” he explains.

The ROBIN 600 Beams were positioned on the first three LX trusses in a V shape, with the ColorSpot 700E ATs also flown above the stage.

The LEDWash 600s were rigged on the front truss and used for general stage lighting, while the ColorSpot 250s were scattered around the deck and utilised for assorted back-lighting effects.

“The Robe 600E Beams are always a great crowd pleaser,” Ferreira enthuses. He used them for eye-candy, both pointing directly forwards and up into the sky in searchlight style.

It was at the Award winning 2011 Innibos Festival when he used Robe’s amazing LEDWash 600 – its fastest selling light – for the first time. Now he “Refuses” to do a show without them!

“I genuinely feel that they are the ultimate LED wash fixture at the moment,” he states.

He thinks the zoom is ideal for washing large performance areas as well as to create smaller pools of light for specials, which is fundamental to this theatrical take on the lighting. He thinks that the colour mixing is “Incredible” and the sheer range, from the saturates to the pastels, really enables his designs to “Come alive”.

He is delighted to have had the chance to work with some of the new fixtures over the last 12 months, adding that “specifics stand out like the robust construction and the fact they they are built to travel and tour.”

He appreciates the internally powered LED display on each fixture which is helpful for addressing fixtures whilst the crew are still busy sorting out power. The light weight of the new ROBIN ranges is also a great advantage and makes everything so much more portable.

“As I have said before, it feels like every Robe fixture was designed and built by an LD. It all works properly, the colour mixing is fantastic and the general output is unmatched!”

He uses Robe moving lights on most of his designs – which vary from small school and educational productions to massive corporate events,

Recently he had the chance to light a show at the South African State Theatre in Pretoria which has LEDWash 600s – the first imported into the country by Robe’s SA distributor DWR - in the house rig as well as generic lighting.

Having the opportunity to compare these side by side, he comments that what impressed him most “Was being able to colour match the LEDWash 600s precisely to the gelled and colour corrected fresnels ….. That’s certainly something that not every LED fixture can do!”