.
“The Money Drop” (Nigeria) is a new version of Endemol’s high-tension TV games show and the first such series to be aired on the African continent.It was recorded in Kew Studios in Johannesburg with lighting supplied by leading SA rental company, Blond Productions.

Centurion based Blond Productions was involved right from the outset through their close working relationship with Endemol South Africa.

They came up with a staging concept and supplied the full technical production as well as production management and co-ordination, including running the specialist games computers and software, the scenic pod screens, etc..

Wayne Sproule from Pendragon Dezign was asked to create the set – based on Endemol’s brief - which was built by Dream Sets, and Blond commissioned Julio Costa and Peter Furstenburg to develop the bespoke software and systems required for the game play.

This included how the amounts of money placed on different play areas was calculated according to weight, and then physically dropped into the bins below by MIDI triggers releasing trap-doors. MIDI was also used to fire 90% of the lighting cues.

With the set and lighting installed for a month in the studios the opportunity and the budget were available to ensure that the very best quality solutions were found to all the visual and live staging challenges.

When it came to the lighting design, it was vital that texturing, depth and definition could be added to the set, so Peter Reick and Blond’s MD Christiaan Ballot met with Duncan Riley from Robe’s South African distributors DWR to identify which fixtures might combine best with the set design.

The LEDBeam 100 caught their eyes and came under close scrutiny!

This is also when they decided on the Anolis ArcLink Optic 4 for the set.  Ninety-six units were chosen to provide a smooth, even wash across the various frosted panels around the top storey of the set, which at times looked like they were floating in mid air!

Blond then decided to purchase the 48 LEDBeam 100s used in the show, together with six new Robe ROBIN 600E Beams.

These are now added to their already extensive stock of Robe products. Blond has steadily committed to investing in the brand and the latest Robe technology as it has come on-stream.

New Prolyte trussing was acquired for the project together with a new Grand MA 2 Light console, also from DWR.

The LEDBeam 100s were used highly effectively – complete with the 25 degree frost filter – to light and texture the four outer pillars of the set, bringing a real three dimensionality to these key features.

Twelve Robe MMX Spots were positioned at the back of the set, used for powerful beam light effects shooting forward and through the main playing areas. A total of 12 ROBIN 600E Beams were rigged on trusses running down each side of the studio for general set coverage, together with the 12 x ColorSpot 700E ATs on the front truss. 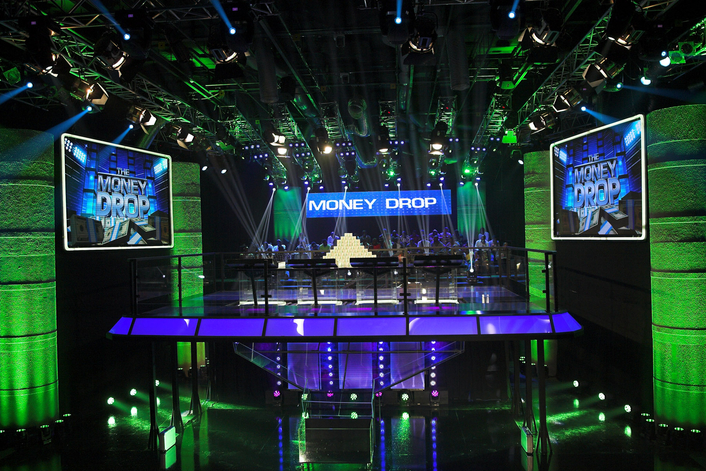 The 575XT Scans were right at the back of the space behind the audience. A variety of other lights were used, including LEDPARs and battens and 2Ks.

The real aesthetic challenge was in fitting the double decker set into the relatively compact studio space – and increasing its appearance of height and depth, a task in which the lighting was a major optical ‘magic’ factor!

In terms of cues and operation, the requirement was for lighting to be slick, smooth and streamlined as the show’s different sections segued together and the contestants bet their money on answering eight questions correctly!

Endemol Money Drop Series Producer Josh Feldman comments, “This show is all about lighting and visuals and so it was important that we chose the best suppliers to work with us on it. Blond have done an excellent job again”.

The LEDBeam 100s are “Phenomenal” reckons Christiaan Ballot, who is delighted with the purchase, “Specially with 48 of them, you can get serious punch and a whole range of cool effects” he expands, seeing an extremely busy future for them as dynamic fixtures easily fittable into all sorts of spaces – due to their tiny weight and dimensions - for numerous applications.

Whilst on the subject of Robe, Ballot adds, “The Robe 700 Series are the most reliable moving lights we’ve ever bought – they have worked almost non-stop for five years with virtually no trouble!”.

‘The Money Drop’ is now being broadcast on African Magic Entertainment under DSTV Africa.