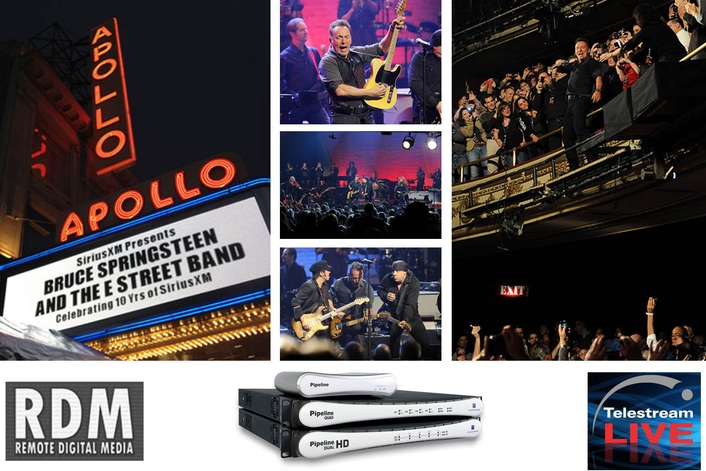 "The Avid editors had never before had access to their media this quickly," said Sandor Bondorowsky, principal at Remote Digital Media. "Pipeline allowed us to capture and encode the video on external drives which were delivered to the edit bay, ready for immediate editing – no waiting for ingest and no transfer time."

Remote Digital Media (RDM) is a remote video production company that provides state-of-the-art services for television production clients. Pete's Big TV, the tour video package supplier, reached out to RDM to provide the quick turnaround Avid editing solution. RDM's LiveEdit solution, powered by Pipeline captured eleven camera feeds and a line cut directly into external RAID5 drives in Avid DNxHD 145 high-definition format for immediate delivery to the editors. Since Pipeline is network based, RDM also uses it for real-time editing, enabling multiple editors to simultaneously access the video and begin editing while it is being captured.

"This workflow demanded capture from multiple live feeds direct to DNxHD which is exactly what Pipeline was designed to do," said Barbara DeHart, VP of marketing at Telestream. "The ability to receive the content in the required format allowed the editors to begin editing immediately, saving a significant amount of time."

Bruce Springsteen Live at the Apollo is the latest in a series of live productions using LiveEdit powered by Pipeline. Over the past year the combined solution has been used for:

• IFC coverage of the 2011 SXSW Music and Film Festival

• "Mark Twain Prize" at the Kennedy Center in Washington DC for PBS-station, WETA

In addition, at the end of this month, LiveEdit and Pipeline will be used to record the Comedy Awards for Comedy Central.