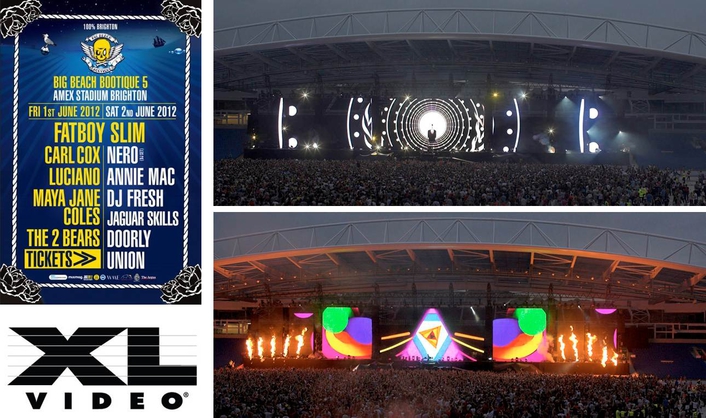 XL Video’s project manager for the two nights over the Jubilee Weekend was Paul McAuley (“Macca”). He and the crew, which included Catalyst programmer and operator Nev Bull, faced numerous challenges; the fact that it was the stadium’s inaugural gig (it’s the new home of Brighton & Hove Albion FC), a tight timescale, and the erratic weather amongst them!

The largest screen was the 20 metre wide by 10 metre high section of Barco Mitrix from XL Video, positioned immediately behind Cook’s DJ mixer, filling the upstage area. This was flanked by three other screens per side at ten, five and five metres wide respectively.

The special playback video content produced by Fleming and Cook for the Beach Bootique 5 performance was stored on laptops and mixed ‘live’ on-the-fly by the two of them as the performance unfolded.

Although specific visuals were prepared for certain pieces of music, the show was completely unscripted with no guarantees that these would be seen, as Cook played out as he always does - feeling and responding to the vibes of the moment.

Fleming, positioned onstage so he and Cook could clearly see and communicate with one other, completely tuned in to this psychic environment and called the show’s visual cues as they came up - producing a highly spontaneous visuality that flowed seamlessly for the two hour set, utilising all the screens in different combinations.

Fleming and Bull were able to schedule time together in advance of the show to work on producing a variety of different screen looks and scenes in the Catalyst that Fleming also had at his disposal.

The playback footage was a lively, provocative mix of graphics, colourful animations, text, and more, all of which got the crowd energised – from doves to vintage audio effects kit, smileys, key words from planet Fatboy Slim and plenty of hi-energy mood animated effects.

The IMAG mix also appeared on combinations of different screens, with inputs from four cameras – two Sony BRC 700 robo-cams and two of XL Video’s Sony HXC 100s, one locked off and one operated.

XL Video supplied a third Sony HXC at front-of-house which was locked off to give Fleming and Bull a FOH overview for their preview monitors. 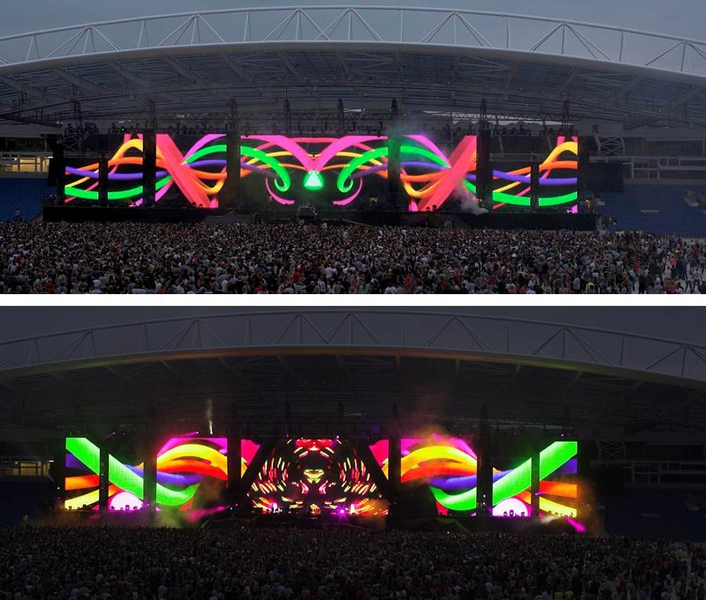 Fleming cut the raw mix using a Sony Anycast, which took in all the camera feeds and the playback content stored on his and Cook’s laptops. All of these were then fed into the Catalyst v4 system via HD/SDI capture cards and framed / masked treated as required, and output to the screens by Bull using a Road Hog Full Boar console for control.

Also on XL Video’s team were crew chief Icarus Wilson-Wright, Steve Grinceri and Dan Oswald tech’ing the LED screen, and Myway who took care of all the cameras.

Says Macca of the highly-acclaimed event: “Everyone in all departments worked extremely hard – and very much together - to produce a great show. The conditions and the climate were tough but the rain didn’t dampen anyone’s enthusiasm for the show!”

XL Video
A majestic show: grandMA for Kings of Leon
grandMA2 has the X-Factor