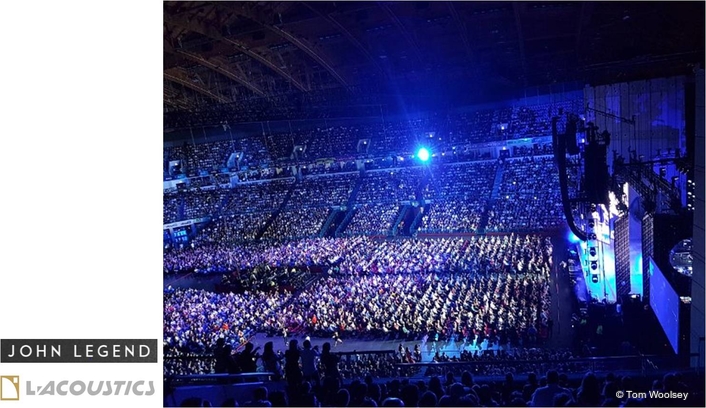 “As is so often the case, the client specified an L­­‑Acoustics system,” explains BCS owner David Shepherd. “This is one of the reasons we’ve been an L­­‑Acoustics supplier for several years now. Their systems are rider-friendly simply because they make great sounding products and consistently deliver the high quality of sound the artists want. And we want to provide our clients with that high quality - you always know what you’re going to get with L­­‑Acoustics. 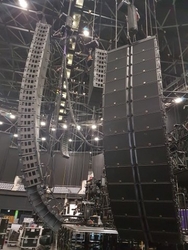 We’ve been working with John Legend since 2014,” recalls BCS project manager, Nick Boulton. “His front of house engineer, Troy Milner, had been really impressed with a K1 system they’d used during the first run of shows he worked on with John and he wanted to replicate that experience.”

In the larger arenas, BCS deployed main hangs of 14 K1 with 4 K2 downfills, inverse stereo out hangs of 14 K2 and a flown centre hang of 6 Kara. To add a little more impact to the system, K1-SB were flown behind each of the main arrays, with additional KS28 in front of the stage in an arc sub configuration to provide smooth low end coverage throughout the venues. The entire system was driven with AVB-ready LA12X amplifier controllers. 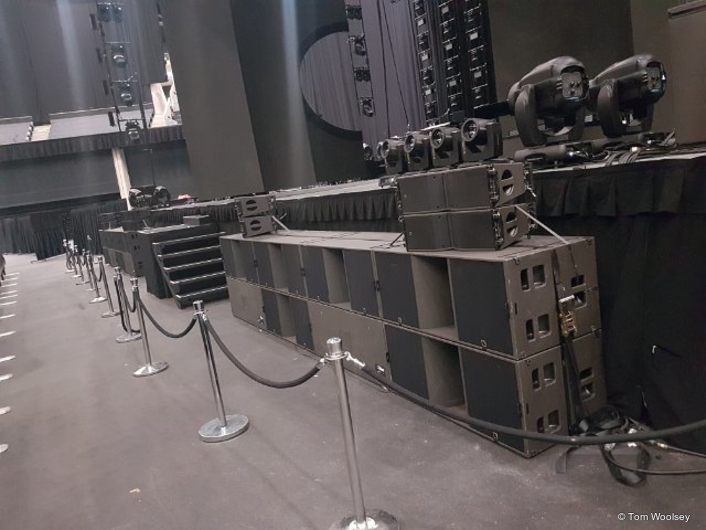 Additional KS28s in front of the stage in an arc sub configuration provided smooth low end coverage throughout the venues.

“The rig performed very well throughout the tour,” concludes David. “It's easy to fly, safe and quick to work with and provides us with the scalability we needed for the varying venue sizes. We’ve worked a lot with John Legend over the last few years. Everyone is always happy with what we do and the L­­‑Acoustics systems we provide. This tour was no exception.”

About L-Acoustics
Founded in 1984 near Paris, France, L­­‑Acoustics is a leading manufacturer of turn-key solutions for the professional sound industry. Part of the L-Group, which counts 400 team members, L­­‑Acoustics is present in over 75 countries either through subsidiaries or via a network of certified distributors or providers. Twenty percent of L­­‑Acoustics’ team-members are dedicated to research and development.

Recognized throughout the industry for pioneering the modern line array, L­­‑Acoustics offers a total system approach for both the touring and fixed installation markets, and a product line responding to the needs of venues from the most intimate club to the grandest arena. L­­‑Acoustics sound systems can be heard in places like the Hollywood Bowl, the NFL Cardinals University of Phoenix Center, or the Philharmonie de Paris. L­­‑Acoustics solutions have been used at five of the world’s ten top-grossing festivals*, the London, Sochi and Rio Olympics, and on the Adele 2016/2017 World Tour, among others.

* According to the Pollstar 2016 Worldwide Festival grosses