Renegade Smashes It with Lighting & Video Design for Kasabian Tour 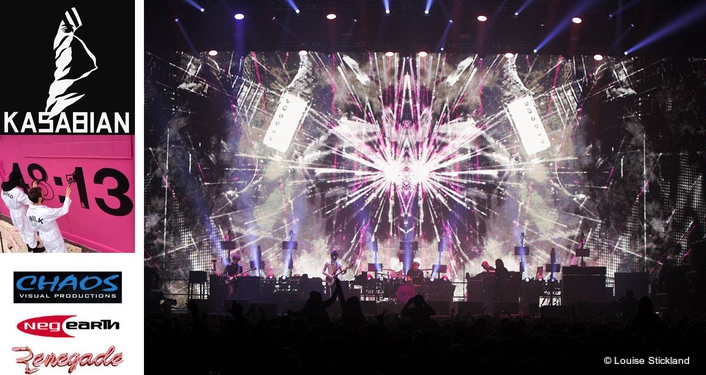 .
2014 has been a full-tilt year for UK rock band Kasabian with a massive homecoming gig in Victoria Park, Leicester in the summer followed by their acclaimed Sunday night headliner slot at Glasto. The year ended with equal style and gusto with a sold out European and UK arena tour, complete with a daring and ambitious show design by Nick Gray from Renegade whose creative magic ensured something radical!

Kasabian’s reputation for amazing live performance continued with this maelstrom of shows, storming their way thought a set action-packed with energy, hits and material from their exciting newest album, 48:13.

Nick Gray’s starting point for the stage, lighting and visual design was in developing a video aesthetic. He and Kasabian’s Serge Pizzorno discussed the initial concepts based on wanting something that was related to the band’s performance, non-conventional, innovative and visually exciting, the result of which is an exciting blend of edginess and audacity using new kit and techniques. 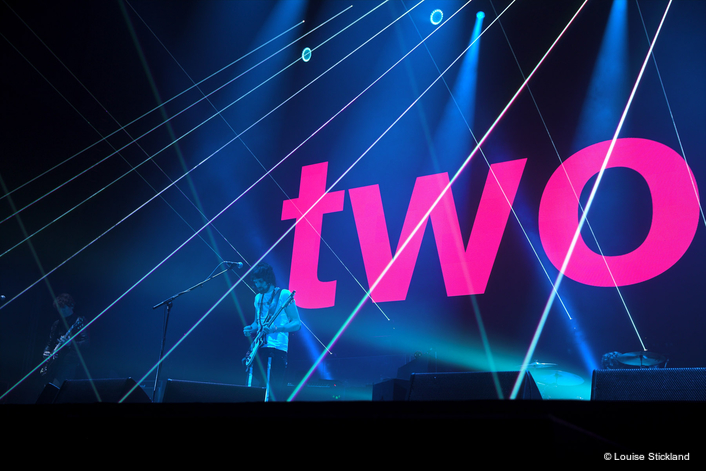 Nick and Sergio share similar artistic tastes and also made the decision to collaborate on the video content design, much of it inspired by the 2009 Gaspar Noé directed psychedelic masterpiece, ‘Enter The Void’.

“While I had a massive responsibility to deliver … I simply didn’t want anything safe, tried-and-tested or guaranteed to work! That’s dull … and I wanted to take some risks!” states Nick on his combative approach. 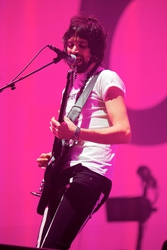 Demolition
Eight mapped Xbox Kinect IR cameras were dotted around the stage, positioned to capture the band in action, and the footage was pre-programmed into cues laced with various treatments created in a d3 media server.

The d3 also stored some specific playback content which was displayed at certain times, primarily abstract words that related back to the Victoria Park gig, but these very much played a supporting role to the IMAG look.

The Kinect cameras were also augmented with feeds from four operated Sony HXC-100s.

Using a mix of timecode from the band and manual cues, the deconstructed IMAG dialogue unfolded on the screen, even more visually compelling and harmonious as it was related directly to the band’s movement and positioning, putting it subconsciously at the very essence of what everyone was hearing and seeing onstage.

Much of it was treated with variants of the vibrant pink-and-white signature colours of the 48:13 album art.

Nick’s zeal for the unknown spurred on many ideas, and early-on in the video journey he consulted with Sam Pattinson from visual design and production specialists Treatment, also known for his ground-breaking work.

Hungry for the new, they explored several options in IR camera technology before deciding on the Kinects, which are designed for gaming applications rather than touring. 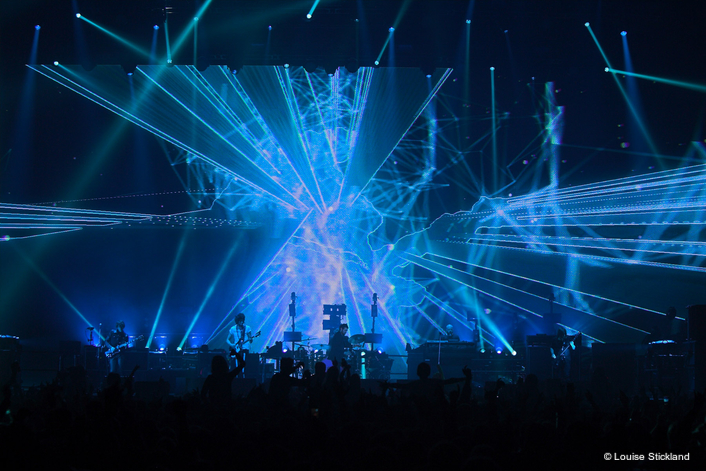 They were chosen from a myriad of options because Nick particularly liked the scuzzy analogue texture of the capture feeds and the definition of the movement. “I wanted something that wasn’t a surveillance camera – as that’s been done so many times before. I wanted a quality to it, but also a distinctly different style of output to a broadcast camera. I also fancied using the technology completely out of context!”

The camera and control system meant that a completely unique set of dramatic IMAG visuals were produced for each show, dependent on a series of random variables like how the band perform … and also where they are standing and how they are moving onstage. 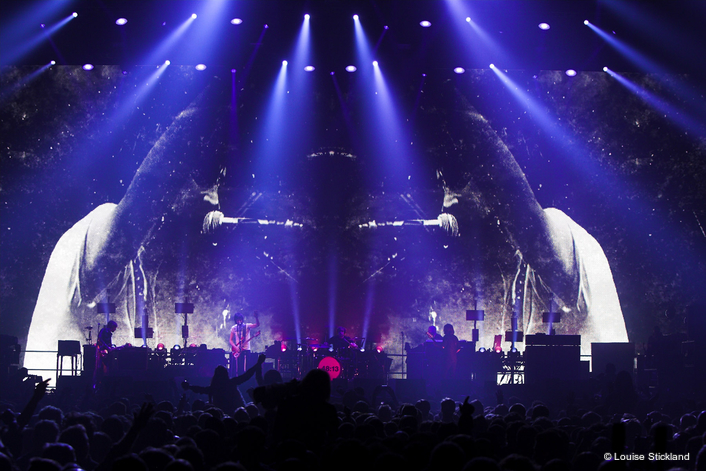 As far as everyone is aware, it’s the first time that these cameras have been toured on a live music show like this, with so much relying on them, and also so that their output could be integrated into an additional background layer! They proved remarkably robust!

The “Demolition” real-time camera rendering software they used was also completely new to a live environment, however it is available as a plug-in to the d3 server, so Matt Svoboda from d3 Technologies joined the team involved in the development the touring system.

“This collaboration of people motivated by doing something completely different came together almost accidentally,” explained Nick, acknowledging that real-time playback / effecting has been done in exhibition environments using these products, but never for a live music show. 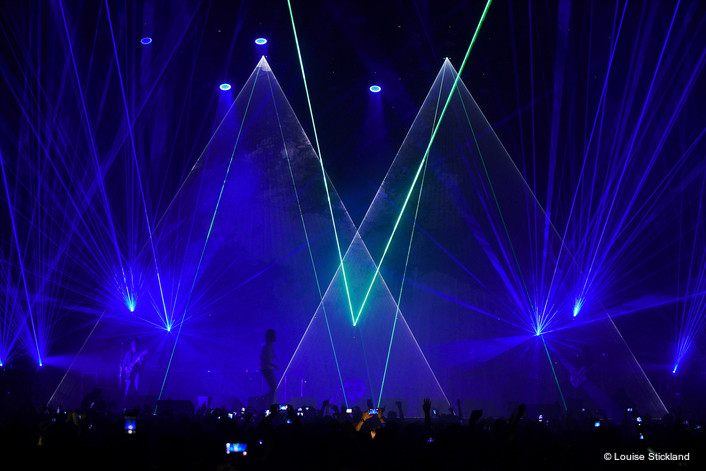 As soon as the idea was rolling, the team expanded to include Alex Leinster from touring video contractor, Chaos AV.

Things like the movement of a hand up a guitar fret board, on a keyboard or a mic could become translated into a beautifully fluid algorithmic sequence onscreen that resembled a kaleidoscopic piece of artwork.

The broadcast cameras – two at FOH and two in the pit on track-and-dolly – were used only in two songs, also fed through the d3 operated by Gilbert Roper before being output to screen and also effected for a seamless but contrasting relationship with the Kinects adding real detail to the picture.

“The bottom line” states Nick, ‘Is that everyone has come to see the band rather than watch a set of video visuals ... this is a no-nonsense approach, they are playing there in front of the fans and are displayed onscreen in a very different but related way intended to completely heighten the whole fan experience”.

The visuals were displayed on an impressive 26 metre wide by 11 high slab of Winvision 12 mm pitch LED screen upstage.

Illuminating
Designing both video and lighting really allowed Nick the creative scope he needed for designing a visual identity.

“Lighting is always important in Kasabian shows but this one was a really careful balance between lighting and visuals, and I was able to balance them more easily and ensure there was an appropriate synergy.”

Starting onstage, three 10 ft trusses were slightly raised at the back, and inside each one were four Sharpies and four Sharpy Washes. Three scaff pipes were vertically mounted to each truss section, each rigged with Atomic Colors and 2-lite Moles.

At the very top of each of these nine poles were Beam Burst lasers. 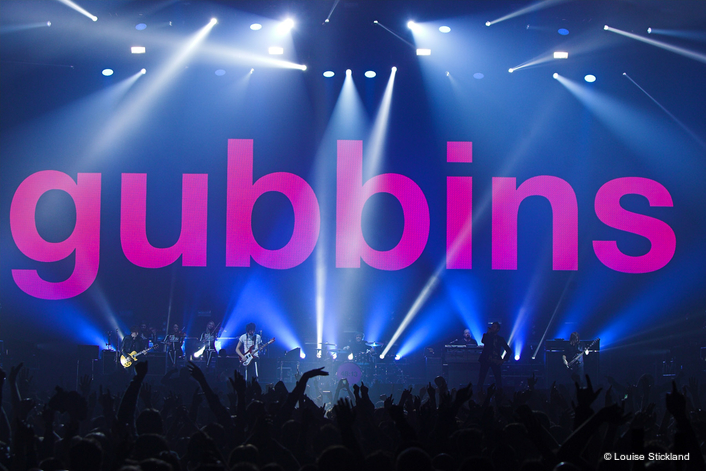 Two side towers were made up from the same type of trussing, loaded with two Martin Viper Wash DXs for punchy low-level lighting shooting across the stage, plus more blinders and strobes.

The overhead lighting was based on three trusses plus one advanced truss. On the advance truss 12 Viper Wash DXs provided key lighting – chosen for their crisp optics and smooth shuttering system – together with eight Atomic Colors, eight 2-lites and six Sharpies.

This versatile selection of fixtures was worked hard to keep the energy pumped set full of anticipation, complimenting the video and also adding their own dimension to the show.

Also central to Nick’s creative team was lighting operator Rob Gawler who ran everything from their desk of choice, a Hog 4. 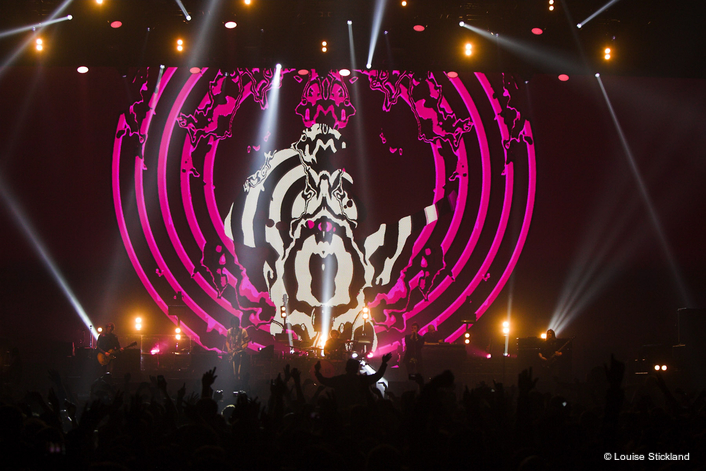 Nick was impressed with the Beam Bursts which were trialled at the Victoria Park gig, so this time he added 30 more to the back truss. The design also inculpated a polished stainless steel strip along the front of the stage that was used as a highly effective ‘bounce-bar’ for the back truss lasers.

Three full colour 20 Watt lasers were also part of the package, one on the floor stage centre and two on the back truss, all supplied by ER and run by Renegade regular operator Nick Ross, using Pangolin control, played back via a HedgeHog 4N.

Lasers were used sparingly, but had their own special high-impact moments plotted into the show, adding another layer of visual ambience.

All lighting was supplied by Neg Earth, the Production Rigger was Phil Broad and the tour was production managed by Tyrone Brunton.