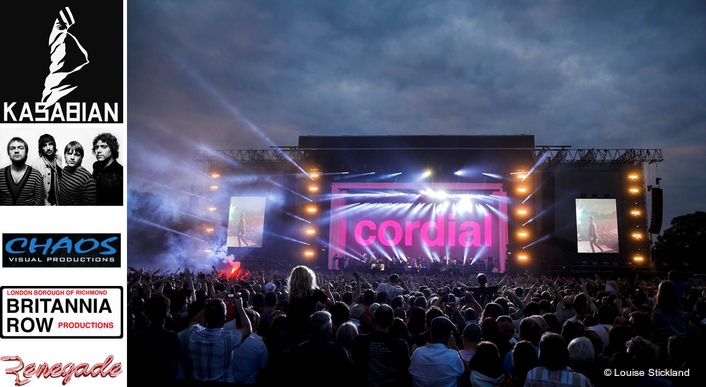 .
Creative Lighting Designer Nick Gray of Renegade created a spectacular show for Kasabian’s incendiary homecoming gig in Victoria Park, Leicester, UK, realising a long-term dream of playing in front of 50,000 fans as their latest album ‘48:13’ rocketed to number one in the UK charts.

Gray worked in close collaboration with the band’s Creative Director & Show Designer Aitor Throup on the project which included over 500 lighting fixtures and a large 22 metre x 11 metre upstage 9 mm pitch white Winvision LED screen which made up a complete white box lighting and visual environment. Band founder, guitarist and vocalist Serge Pizzorno was also intimately involved in the whole design concept and look of the show. 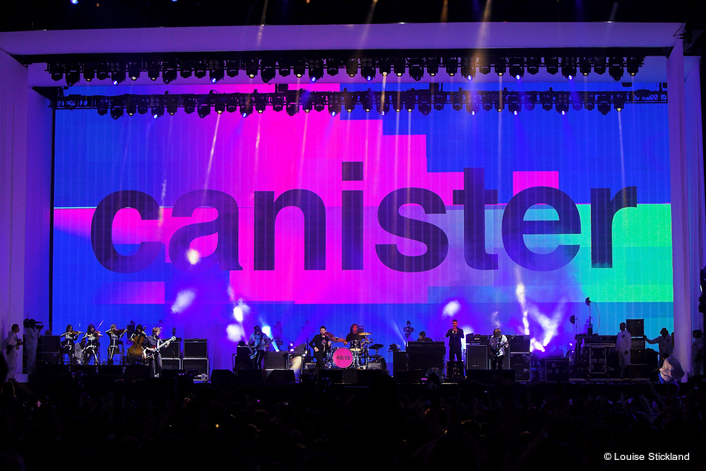 The show was staged a week ahead of Kasabian’s headline appearance at the 2014 Glastonbury festival. Staged on the summer solstice, it was the realisation of a long term dream to play their home town – where they all still live, which ratcheted the pressure even more for everyone to make it a truly jaw-dropping production, as well as it being recorded by a 20-camera 4K shoot including a helicopter.

Other challenges included the limited rehearsal time due to noise curfews and minimal programming due to the long hours of light. The dramatic reveal at the top of the show and the show itself was the first time that anyone had gone through the process also adding to the frission of excitement!

The StageCo stage offered a 22 metre wide performance space with 11 metres of headroom, and Gray ensured that every available centimetre was fully utilised for lights, which were installed on overhead trusses and side towers. 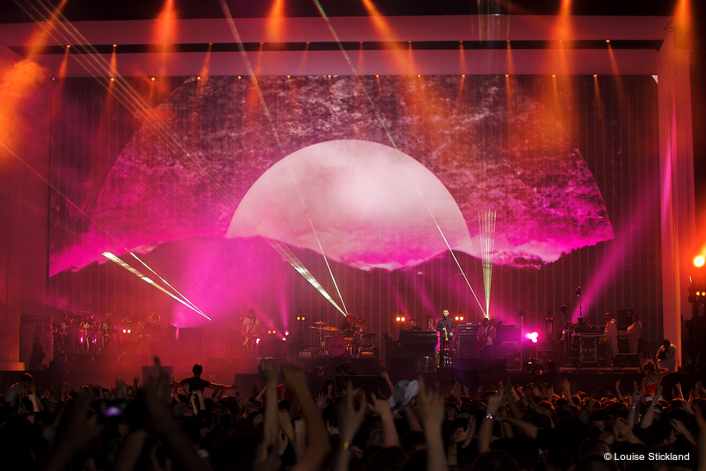 The entire space was made into the white box with white fabric blinds on a Fischer roller system – supplied by Blackout – which rolled across the roof and down the sides of the space as part of a dramatic choreographed opening sequence, complete with swipes of video content flashing down the video screen.

The floor was laid with white Marley on which all the band’s backline was set up tightly in a channel third of the way back. The band all wore black and white which was part of Throup’s visual concept, and he also commissioned the video content from Silent Studio. This had a heady black, white and pink colour theme following the album artwork, together with key words of text from secret messages and selected songs – the set was a collage of favourites from all five of their studio albums which span the last decade.

Gray’s lighting took the high contrast of the video theme as a starting point, and introduced multiple layers of depth and texturing that complimented the video elements at certain points and then took over the visuality of the show at others. 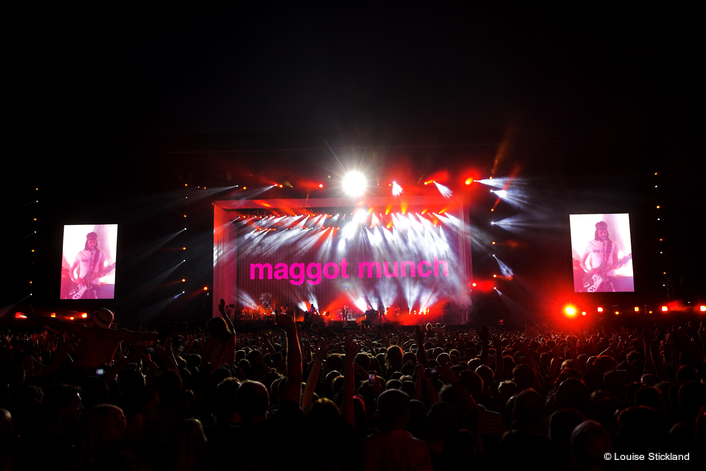 Being a large outdoor gig, Gray was keen to have a serious amount of lights onstage to ensure the spirit and largeness of the occasion was etched on the memories of everyone attending!

He also incorporated lasers into his design, utilising 5 x 24 watt OPSL Lasers and 68 of the new RGB Burst Pro RGB lasers which were supplied by ER together with Pangolin control and 12 Viper smoke machines positioned strategically around the arena.

“I wanted to have a few special elements of trickery up my sleeve,” says Gray, “And the single point source lasers were one of them”.

He used them sparingly and very much like lighting effects to add elegance and structure to the show, with a complexity of beautiful looks including a fabulous laser solo during ‘Treat’ that had its own unique quality of light. 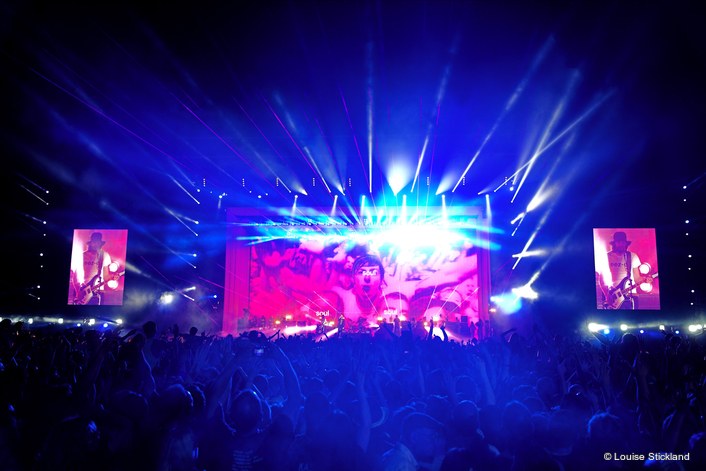 For Gray this was the biggest highlight of the set, especially as it was a new track & needed to surprise everyone there!

Above the stage were a rear and a mid truss, both on Kinesys motors so they could move in and out, and these packed with lighting fixtures. HUD truss was chosen so it could be pre-rigged in identical sections with fixtures to save time on site for the crew.

The back and mid trusses were comprised of ten sections each of this, with each section loaded with 4 Sharpies and 2 Martin MAC Viper Wash DXs. Along the front rails of each section were three Atomics and two 2-lites – totalling 120 fixtures. 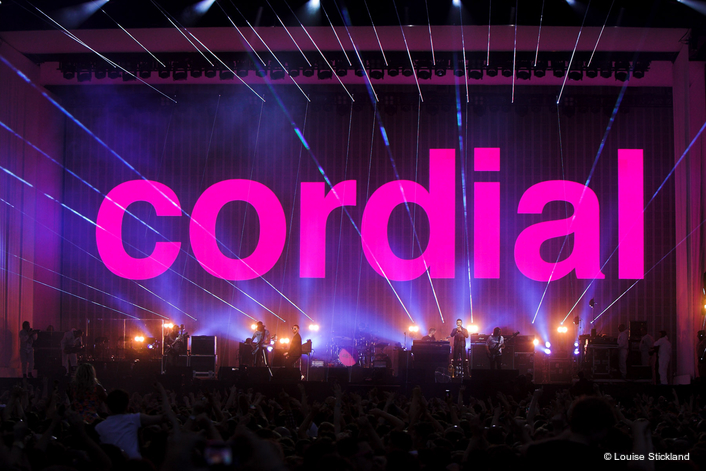 On the floor upstage were 4 of Gray’s signature roll-on HUD truss pods, each with three vertical scaff tubes at the back and RGB Burst Pro Clusters mounted at the top of each one. In each of these truss sections were another 4 Sharpies and 4 Sharpy Washes and on the front, three Atomics and three linear 4-lites.

For cross stage lighting at the front were two downstage towers, each with an Alpha Wash 1500, two Martin MAC Auras, two Atomics and two 4-lites. 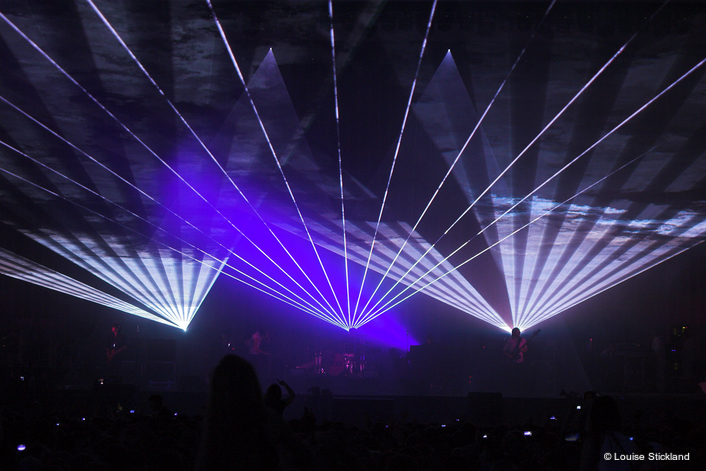 On the floor of the stage wings five 4.5 K Big Lites were stationed per side for big Hollywood sweeps and three Alpha Wash 1500s. Finishing off behind the stage were another ten 4.5K Big Lites, primarily for effects on the DVD.

To enhance the audience lighting on the delay towers were another eight Alpha Wash 1500s and Gray also called four Super Trouper follow spots for the show.

There were also additional smoke machines to deal just with all the atmospherics needed on the stage space.

While some songs were structured to work with the video, in others lighting was the main effect, and Gray was able to fill the whole stage and the arena effortlessly with big, bold, epic stadium style looks supporting the band who blazed through an incredibly powerful and memorable set ensuring the gig made its mark on Leicester! 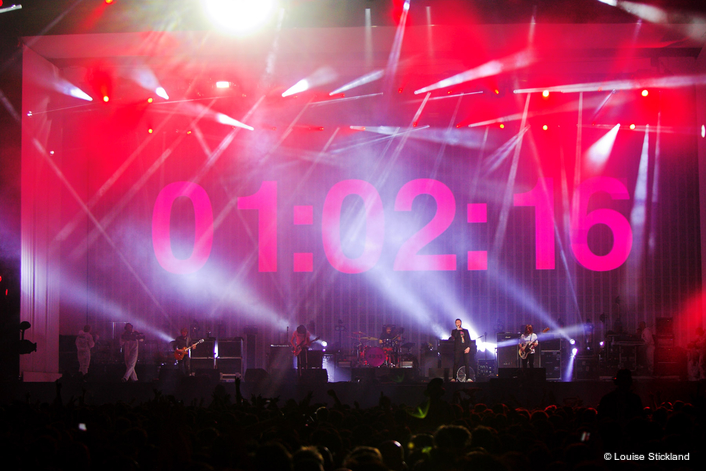 Gray worked alongside his regular team including lighting operator & programmer Paul Kell who ran the show on two Hog 4 Full Boar consoles and Crew Chief Rob Gawler, who worked with seven technicians from Neg Earth, the rental contractor for all the lighting equipment.

Video production came from Chaos Visual Productions. The cameras were directed by Paul “Eggy” Eggerton and audio was supplied by Brit row and mixed by Paul Ramsay (FOH) with Yogi on monitors.