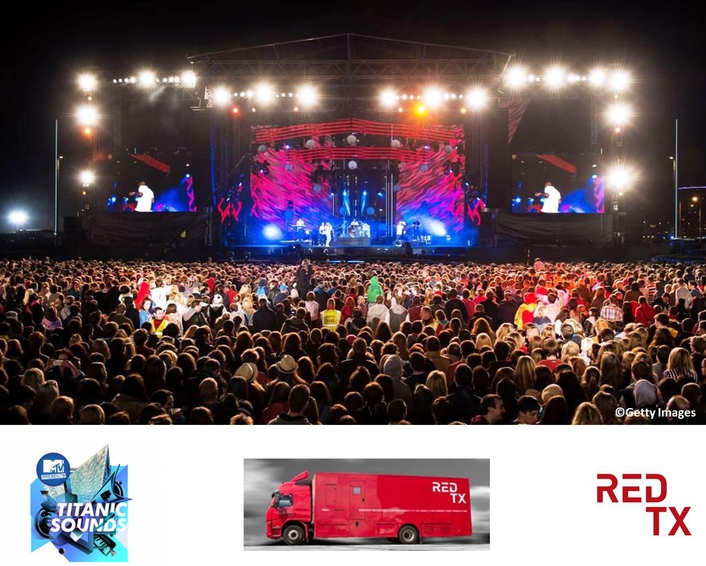 Set against the backdrop of the new building, this one-off major music gig featured performances by Olly Murs (with a full nine-piece band), Pixie Lott, Katy B, Rizzle Kicks and Sean Paul.

Summerhayes says: “Apart from the weather, which was absolutely freezing, the recording was a huge success and we had a great time working with the MTV production team. The setting, on the slipway in front of the new Titanic Belfast tourist attraction, was perfect and the concert was very well received by the audience.”

Thousands of music lovers packed the docks where the Titanic was built for a star-studded pop concert ahead of the 100th anniversary of the ship's sinking.

Staged in front of the new multi-million-pound visitor attraction dedicated to the doomed liner, the MTV Titanic Sounds festival also saw the performances of the  artists.

The old dockland slipway where revellers gathered for the music extravaganza witnessed another major event 101 years ago, when thousands congregated to see the Titanic launched into the water for the first time.

Belfast's most famous export sank a year later after striking an iceberg on its maiden voyage across the Atlantic.

The Titanic Sounds gig is among a series of high profile events being staged in the city to mark the enduring legacy of the ship.

While the mood was upbeat tonight, a more sombre tone will be set over the weekend as Belfast commemorates the anniversary of the disaster that claimed more than 1,500 lives.

Chart toppers Olly Murs and Pixie Lott entertained an estimated 16,000 who braved the cold in Belfast for the spectacular open-air gig.

MTV Presents Titanic Sounds will be broadcast internationally on MTV on May 25th 2012 as part of MTV’s World Stage music series.

About Red TX
Red TX provides a comprehensive concert recording and broadcast service to the music and television industries. The company has state-of-the-art mobile recording facilities and can handle projects of any size or complexity. As well as recording audio for broadcast, the company also records live music events for subsequent release on CD or DVD. It is headed by Ian Dyckhoff and Tim Summerhayes, who have extensive experience in delivering high-quality audio for broadcast.