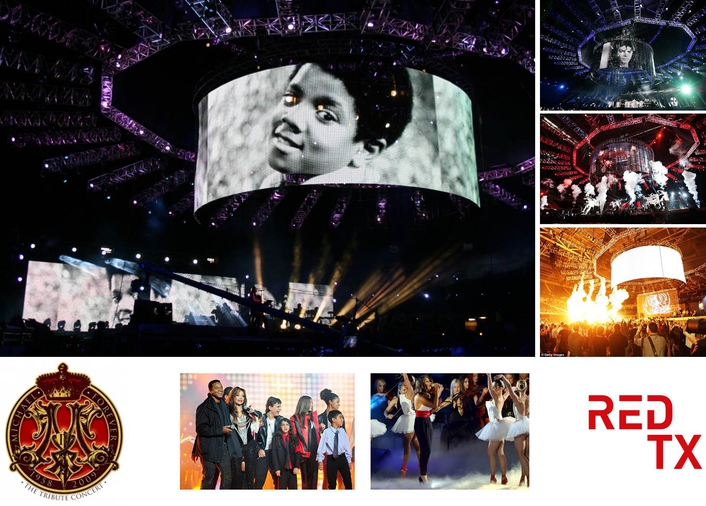 Behind the scenes, broadcast sound specialists Red TX were on hand to record the live audio for subsequent broadcast on Sky Arts
More than 40,000 fans took their seats at the Millennium Stadium in Cardiff this month to enjoy Michael Forever, a star-studded tribute to Michael Jackson.

The concert featured performances from a variety of artists including Christina Aguilera, Leona Lewis Smokey Robinson, JLS, Ne-Yo, JLS, Pixie Lott and Cee Lo Green. The fans, many of whom were dressed in Michael Jackson attire, were treated to spectacular performances on a huge stage, which was billed as the largest event rig ever used at a European stadium.

Behind the scenes, broadcast sound specialists Red TX were on hand to record the live audio for subsequent broadcast on Sky Arts and various other television channels around the world. The company employed its new Red II truck, which was manned by Red TX director Tim Summerhayes with assistance from Ollie Nesham and Ben Summerhayes.

Tim Summerhayes says: “This was a complex show to record because there were so many artists involved and many of them were working to such tight schedules that they were not able to be in Cardiff for the pre-show dress rehearsal. Despite that, the event was fantastic and there were some magnificent performances that went down incredibly well with the fans.

“We recorded the whole show as live and then spent some time tidying up the sound in post production. No re-mixing was involved and the only real issue we had to contend with was a radio microphone failure during Alexandra Burke’s performance. This was fixed after the event when she re-recorded the song at Sarm Studios in London and we were able to drop the new recording into our mix.”

Red TX was commissioned to handle the audio recording by Iambic Productions.  Producer Dawn Davis says: “I've worked with Tim for over 25 years and the recording is always excellent, the in and out seamless, and the dedication tremendous. Red TX have really pulled out all the stops on this one, because despite schedules being impossibly tight and some of the artists under rehearsed, Tim and his team were able to cope with everything and deliver some fantastic audio."

Although the run up to the event was beset with difficulties, the Michael Jackson Tribute concert delivered everything that was promised on the night. The world’s media was there in force and many of the artists who later took to the stage were happy to oblige them with soundbites and interviews. The show itself was explosive – literally, as it involved a vast array of pyrotechnics during Ne-Yo’s opening performance.

The event came to an end with the Jackson family and the show’s stars packing the stage for a run through of Don’t Stop Til You Get Enough, which had the entire crowd up on their feet and dancing along in tribute to Michael Jackson, one of pop’s greatest performers.