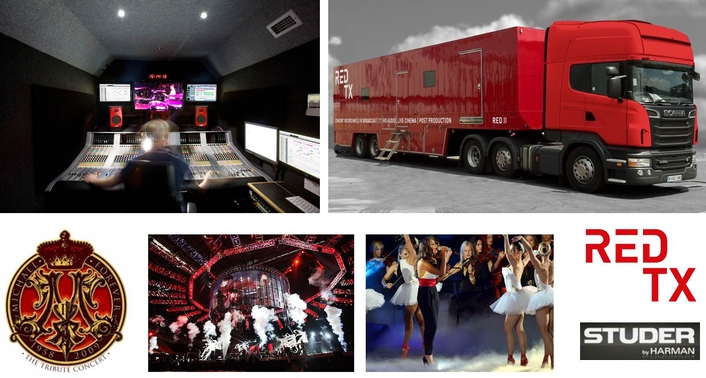 Based at Pinewood Studios, the truck was pressed immediately into service at a Linkin Park concert in Moscow’s Red Square, followed by the Download Festival and other high prestige events such as the Red Hot Chili Peppers’ worldwide launch of their new album in Cologne—which was filmed and broadcast live to 1,500 cinemas around the world. But most recently they recorded Michael Forever—the Michael Jackson Tribute Concert at Cardiff Millennium Stadium.

Equipped with a HARMAN Studer Vista 8 (as is their original RED I production vehicle), they are finding that Studer’s new SCore Live engine affords them a lot more flexibility than they have been accustomed to.

Said Red TX managing director, Ian Dyckhoff, “We have geared the new vehicle around 7.1 because it was becoming increasingly apparent that the requirements for panning were different from cinema 5.1. Also, by incorporating 3D in a fully redundant production vehicle, we are future-proofing it.”

The truck features the highest insulating specifications while the main studio area is a lead-lined, floating room within a room, equipped with active 7.1 surround sound monitoring and the SCore Live-powered Studer Vista 8. 96 x 24/96 remote mic amps are included as standard, with additional blocks of 48 (up to 240) available for larger projects. All microphone inputs are 24bit/96kHz with full DSP on every channel.

“We have used Studer for many years and have a great relationship with the company,” Dyckhoff said. “It’s also a widely-known platform and useful for workflow, since the BBC has adopted it as a standard, it is on various sound stages here at Pinewood and also in the Royal Opera House. We were very mindful of that.”

Deploying their existing Studer D21m digital I/O frames, with new MADI cards and three of the existing 48-way stage boxes (deployed in their portable flypacks), sound supervisor Ollie Nesham says that with so little time to soundcheck multiple act shows “Studer makes everything so much quicker. It’s a very reliable desk and the graphic control is excellent.”

He also highlighted the bonus of having the ‘Reconfig’ button at the point when they needed to plug in the third stage box. “The console is so flexible that we can add or remove stage boxes on the fly, reconfigure the console to suit with a single button press and all without disrupting the audio currently going through the desk. It’s a big bonus–this function is a really quick way of doing it.”

Once Red TX had painstakingly set up audience mics to capture the audience, they mixed 140 channels from the stage via 3 x 48-way stage racks (including eight returns), compressed down to 128 and recorded onto Pyramix.

Musical acts that participated in the event included the Jackson Brothers, Christina Aguilera, Beyonce, Alexandra Burke, Alien Ant Farm, Craig David, LaToya Jackson, Leona Lewis and Smokey Robinson. And while copyright issues blighted the prospect of live broadcast to around 30 countries throughout the world in 2D and 3D formats, it will now be broadcast at a later stage.

Finally, Ian Dyckhoff confirms that reality TV spectaculars such as XFactor and Strictly Come Dancing are also benefitting from having a Vista 8 in the new production unit. “It’s clear that the presence of Studer is winning us extra work,” he said, as he prepared RED II for its next mission—the opening night of the Coldplay European tour in Madrid.