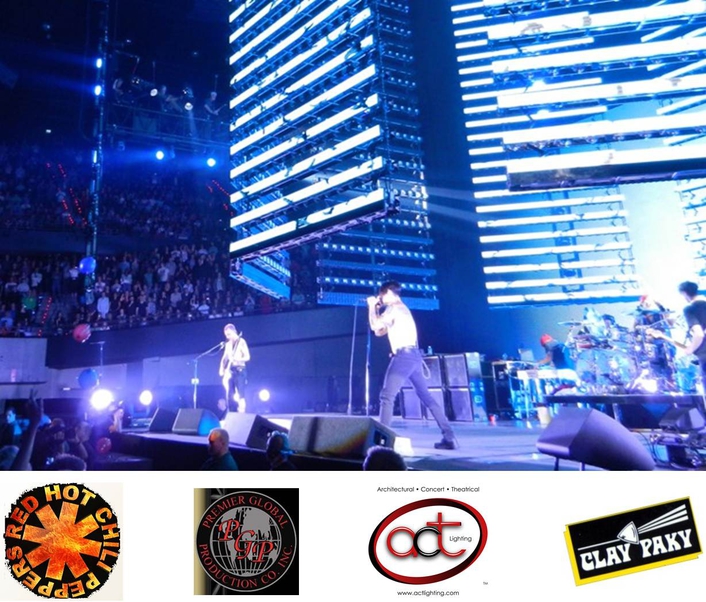 The ubiquitous Sharpy fixtures are deployed “on the floor, behind the upstage video screen
The Red Hot Chili Peppers have embarked on an epic world tour accompanied by an array of Clay Paky Sharpy lighting fixtures. The tour follows the release of the band’s tenth studio album I’m With You, and is the group’s first outing since the Stadium Arcadium tour in 2006.

US-based Premier Global Production, who provided lighting services for the new tour, worked with lighting designer Scott Holthaus to fill his equipment needs.  “We had just gotten 78 Sharpy fixtures, which are hot little items right now,” says Vice President of Sales James Vollhoffer.  “We were excited to add them to our inventory – it was time to make the investment since we see a demand building for them.  All of ours are now on a boat heading for the European leg of the band’s tour.”

Scott Holthaus is using the versatile Sharpy fixtures “everywhere – every single place in the show.”  “Although we’ve never been into literal imagery, the set is a three-dimensional shape based around an asterisk,” he explains.  “Everything radiates out into an octagon from an asterisk-shaped video screen in the stage.  Video screens are on each facet of the octagon and can move to face the audience.  They can also expand from 14 to 40 feet like a Venetian blind.  Most lighting trusses are in and around the video screens where they are really working the vertical.”

The ubiquitous Sharpy fixtures are deployed “on the floor, behind the upstage video screen, on top of the six torms, in the center of the octagon and behind the main upstage videowall to blast through the video panels,” according to Holthaus.

He was introduced to Sharpy at A.C.T Lighting (a distributor for Clay Paky in North America), where he fired up a fixture right out of the box while he was getting grandMA training.  “The thing just smoked!” he recalls.  “It shot down the alley.  It was the coolest thing out in a long, long time.  All I’ve seen lately are LED lights, but Sharpy really stands out – its optics are revolutionary.”Vollhoffer reports that the Sharpy fixtures “worked out of the box and performed pretty flawlessly” during a two-week rehearsal period for the tour.

“On the show they are incredible,” says Holthaus.  “For the Venetian blind effect of the video, I needed something to sneak through the cracks.  Once I got the Sharpys they became my utility go-to trick.  When we turn them all on and put them in a configuration it looks like chopsticks.  The lights don’t diminish, and everybody is blown away.”

Holthaus’s ‘right- and left-hand man’ for lighting and video on the tour is Leif Dixon; the lighting programmer is Zach Peletz.