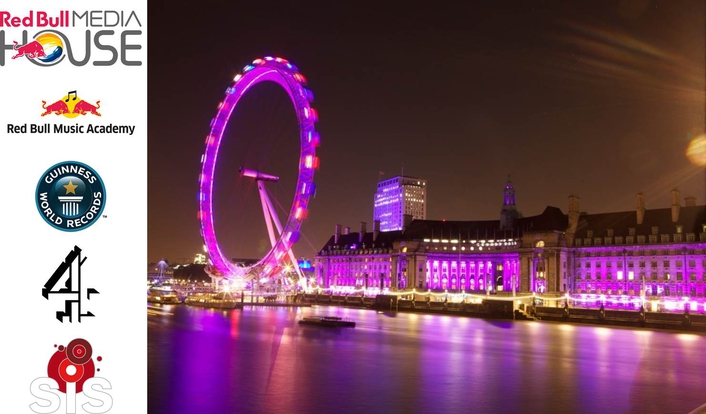 SIS LIVE worked with Red Bull Media House to deliver an ambitious and unique project to mark Red Bull Music Academy’s 15th birthday, to broadcast 31 concurrent live streams to more than a million viewers all over the world.

On 14th November 2013, all but two of the 32 moving capsules of the EDF Energy London Eye were taken over by more than 100 DJs and artists for a celebration of UK club culture dubbed Red Bull Revolutions in Sound. Every capsule saw one legendary club night come alive with resident DJs and superstar guests, including Fac51, The Haçienda, Fabric, and Blitz Club along with artists such as Lily Allen, Rudimental and Katy B.

Another capsule housed two presenters hosting a bespoke Channel 4 live webcast of the event, broadcast live on channel4.com in the UK and via YouTube for the rest of the world, via multi-camera feeds from each capsule.

A total of 31 streams were encoded onsite by eight servers located in a SIS LIVE vehicle and delivered via fibre for online streaming. A 200MB pipe was used to deliver the streams in full 1080 HD format, for file upload and provision of on-site internet connectivity.
David Meynell, Managing Director, SIS LIVE, said: “Achieving a Guinness World Record is welcome recognition of SIS LIVE’s unique ability to deliver live coverage from technically demanding events such as this.

“Leading the delivery of such a high-profile event and working with other parties is what SIS LIVE does best and we are proud to have been involved with this record-breaking programme.”

Thirty SIS LIVE RouteCase ‘studio in a box’ systems were used by SIS LIVE teams to create a live mixing environment, ensuring production was of the highest quality. The EDF Energy London Eye is a popular tourist attraction, so SIS LIVE had just two hours to set up, loading equipment on and off each capsule as it passed by ground level.

Meynell said the planning and preparation for the event was “meticulous”. He added: “We were pleased to continue our relationship with Red Bull to pull off this ambitious production, which demonstrated not only the expertise of SIS LIVE’s operational team, but also the innovation and reliability of our award-winning product range.”

The meticulous planning and efforts by SIS LIVE’s skilled operations team paid off with an extremely successful broadcast – and now the Guinness World Record accolade.

About SIS
SIS is one of the world’s leading companies in the television broadcasting industry. It is the foremost supplier of television programming and data services to the UK and Ireland betting industry. The company’s broadcast business, SIS LIVE, operates the largest satellite uplink fleet in Europe. SIS LIVE offers broadcast solutions including global distribution via teleport and fibre, satellite internet and IP provision, and broadcast systems integration services. SIS LIVE also designs and manufactures an innovative, market-leading range of satellite products. The company covers over 100,000 hours of live events worldwide each year and delivers approximately 80% of live news feeds across the UK.