Putting LED into the Magic Lamp 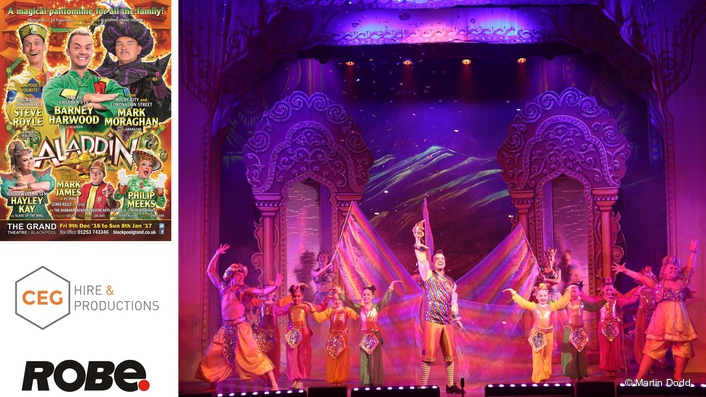 Lighting designer Andy Webb seized a recent pantomime production of “Aladdin” staged at the Grand Theatre in Blackpool, UK as the opportunity to design an all-LED moving and specials lighting rig which was all Robe. Andy had been working on an LED lighting concept for the last two pantomime seasons … with an increasing percentage of the rig becoming LED, and this year he felt the time was right to make a complete switch to LED moving lights and specials.

“Robe currently has an excellent selection of LED products which are suitable for any theatre or performance show,” he commented, after making Robe’s DL4 series, LEDWash 600s and Spikie moving lights plus their PARFect 100s central to this design.

The demands of panto are quite specific. Lighting has to be colourful and psychedelic to mimic the outlandish fantasy sequences at the core of the genre, and everything has to be mega-fast to keep pace with the onstage action, snappy dialogue, not to mention the endless one-liners and constant innuendo!

Given all that, Andy also decided to take an aesthetic departure this year in making the show darker, edgier and altogether more sinister. “I wanted to really ramp up the contrasts between the evil environments like Abanazer’s Cave and the bubble-gum pop-tastic full cast scenes,” he explained.

Eight out of the ten Robe DL4S Profiles were rigged on LX bars 1 and 2, with the other two on the FOH balcony position for front gobo coverage and texturing the numerous cloth drops … a job at which they excelled in the Grand, which was designed by legendary theatre architect Frank Matcham and opened in 1894.

The FOH DL4S Profiles were also used for specials and pick-ups, where their very precise shuttering allowed for extremely small and detailed work.

creating a central back wash across the stage. “They have a very nice colour fade and dim out and blend well with the DL4S Profiles,” commented Andy.

for highlighting the set and cloths.

The 24 x PARFect 100s were on two sets of side booms stage left and right -  fitted with 20 degree diffusion filters - with another three a side on two advanced boom positions in front of the proscenium for cutting across the apron. Andy chose a combination of 60K and 27K S1 PARFects for these front positions enabling warm and cool states, and was also able to utilize the 27Ks instead of having to add generic profiles. 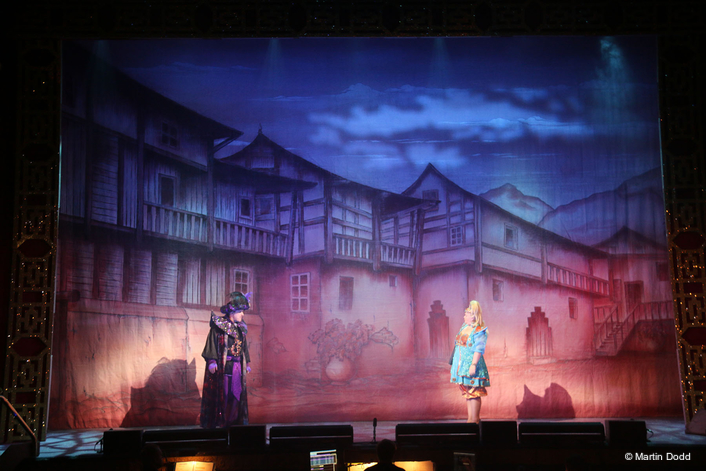 A pair of LEDWash 300 on the front boom position provided some basic wash augmentation.

The 14 x Spikies were divided into a batch of 7 on LX 4, one in the centre and the other six out evenly along the bar which was flown in and out at various times, allowing Andy to fire up the moonflower effect, greatly enhancing light sequences in scenes like the flying carpet.

The rest of the Spikies were all in FOH positions including the Royal Boxes and right at the top of the FOH booms, so together with those on LX 4, the whole auditorium could be filled with the moonflower effect creating stunning impact! 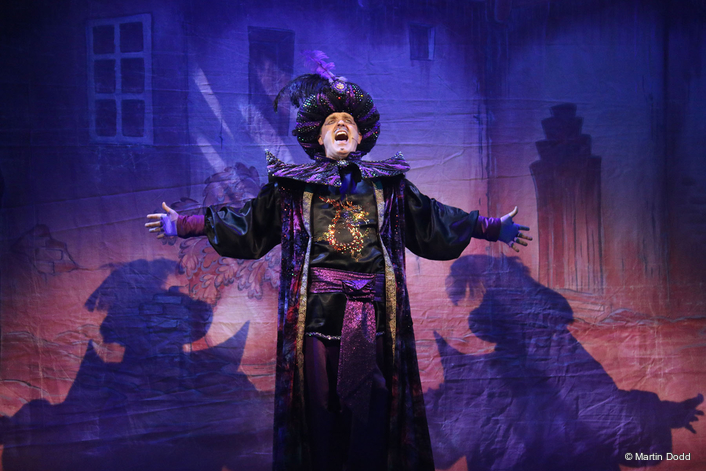 Spikies running in continuous rotation were a cool effect for the police officer’s entrances, their nice tight 4 degree beam and rich blue hugely more exciting and dynamic than the standard theatrical / disco ‘fuzz light’ … AND they could reach right out into the audience.

They were also very effective at the end of Act 1 for the transformation of the environment into the cave scene.

“They are so small we could fit them anywhere and getting then into the Royal Boxes was a huge bonus,” enthused Andy – they literally stood the fixtures on flight cases in these positions which were also used in the performance. Having the Spikies well positioned and to hand really helped to engage and involve the whole audience which was now one of the aims of director Anthony Williams.

Andy placed four CycFX 8 moving LED battens across the front of the stage in the footlights position for up-lighting faces and also for highlighting the further upstage cloths when the FOH angles restricted the reach of some front fixtures. They could then be flicked out into the auditorium for blinder moments and to give an authentic concert vibe for the big pop tunes of the show. 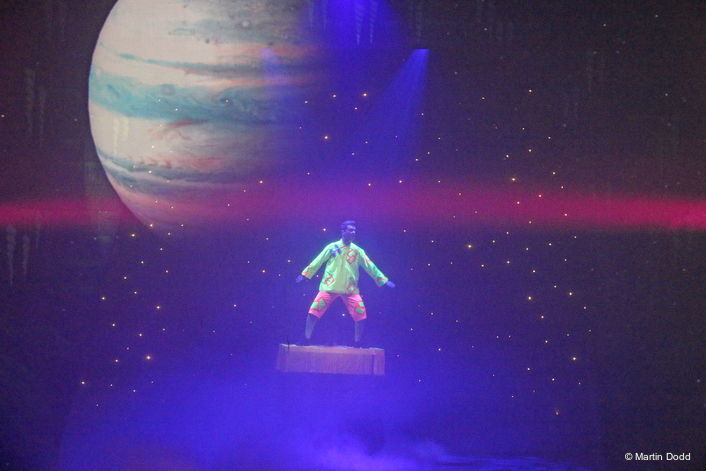 The challenge with lighting pantos is always having limited time with the set onstage elucidates Andy citing the many additional advantages of LED lighting.

A major one is giving the director the freedom to be able to change their mind and instantly respond to a requested lighting scene change – without having to deploy a crew to re-focus and re-gel lamps like in the old days!!!

Blackpool Grand has limited power at FOH, so no extra racks or distro was needed this year as all the extra fixtures were LED.

Lack of noise with these LED fixtures is another plus, especially when the rig is low or they are positioned on balcony bars and in other positions in close proximity to the audience.

With the LED rig powering up instantly and requiring no cool-down at the end of the day compared to a discharge lamp rig, Andy could continue programming right until their curfew each night / day, which might not sound that significant, but all the 10 minute slots added together over the 7 day tech period, amounted to another hour of valuable programing time. Amidst a super-tight schedule being able to claw this back was fantastic – an agile programmer can achieve a massive amount in an hour!

Then of course there’s the saving on gel, which for a run like this of 51 shows over 4 weeks would entail the saturated colours being changed every couple of days! 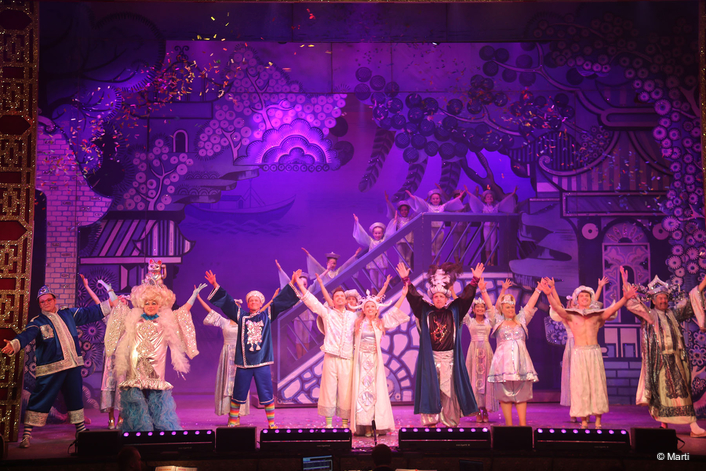 Andy now definitely prefers to design a panto using LED sources as there are so many more options for colour. “I can have all the vivid saturates and warm skin tones I need and total continuity. The sources are now easily bright enough and the enhanced flexibility benefits the entire production.

He also used around 60 house generics on this show, approximately 20 of which were FOH Source Fours adding extra general colouring and warm / cool options, with  around 30 1K fresnels overhead adding top light and some extra stage cover … but the bulk of the work was done by the automated LED rig.

The LED lighting equipment was supplied by CEG Hire & Productions from Norfolk with additional support from Robe UK.

Andy really enjoyed being back at the Grand for the second year in a row. “We had the same theatre crew and technical team, who were once again brilliant to work with and helped everything come together smoothly and efficiently under a lot of time pressure”.