8 Days a Week deploys a complete JBL by HARMAN VTX Series audio system for a massive concert in front of 67,000 music fans

PUR has played multiple concerts at the arena since it opened in 2001, and Frank Müller of 8 Days a Week has been the systems engineer for all of them. One of the biggest challenges at Veltins is the lack of good options for deploying subwoofers. When PUR played the arena in 2014, Müller hung the subwoofers in a 40-cabinet cluster above the center of the stage, which created weight and placement issues for the video and lighting deployments. In order to avoid those difficulties at this year’s show, Müller forwent a traditional subwoofer deployment and instead relied on the superior bass response of JBL VTX V25-II loudspeakers to cover most of the bottom end for the performance. 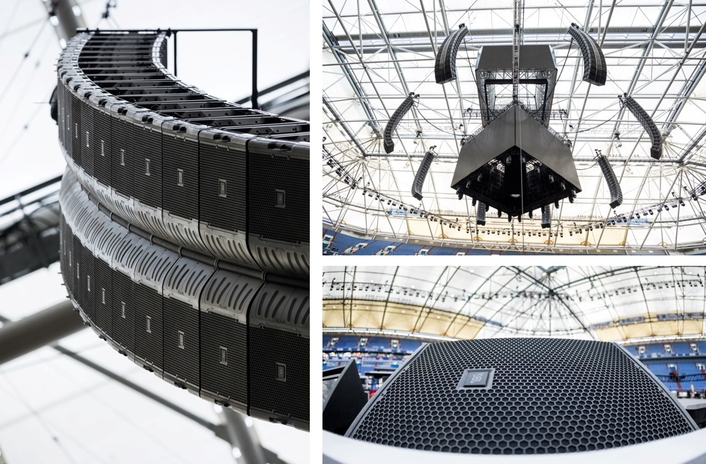 "If you set up a VTX V25 rig, and you use the preset where the bass is all the way open—with no cut at 60 or 80 HZ—you get an incredible amount of low end,” Müller said. “You can easily mix a show on just the V25 loudspeakers without missing any lows. The usual question I get from people who aren’t familiar with VTX is, 'Can you turn off the subs for a second so I can listen without them?' I tell them, 'There are no subs on—it's all coming from the loudspeakers.'” 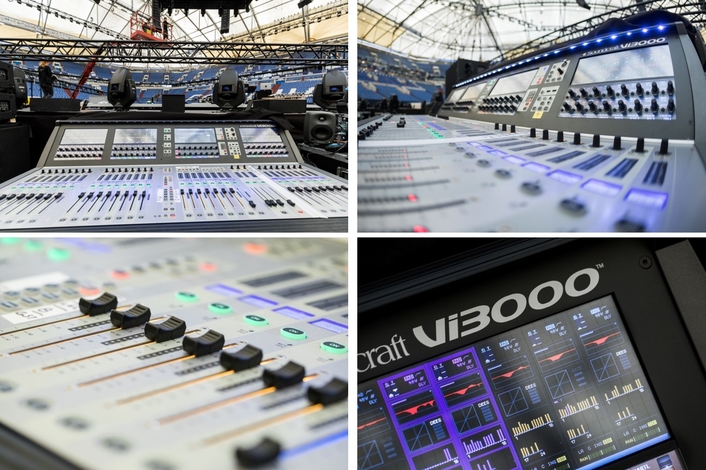 PUR's setup featured a four-sided stage, which provided good viewing angles for everyone in the venue. Using wireless gear, the band members were able to move around the stage at will. In order to accommodate the unique stage setup, Müller explained that he designed the system coverage by essentially drawing a circle around the stage and dividing it by eight. 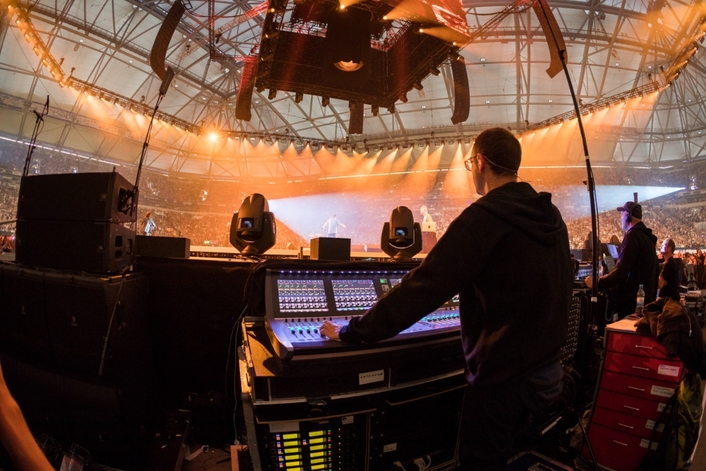 Müller’s design included 144 V25-II loudspeakers, deployed in eight hangs of 18. For front fills, 16 VTX A12 loudspeakers and 24 S28 subwoofers were deployed in eight separate clusters, with two A12 stacked on top of three S28. The entire system was powered by Crown I-Tech HD amplifiers, and the monitor console was a Soundcraft Vi3000. Müller’s team used JBL HiQnet Performance Manager 2.4.1 software to configure, optimize and monitor the system.

"We used the combination of the subs and A12s as a separate front fill system,” Muller explained. “It's physically impossible for only 24 subs to fill an arena like that. So other than in the areas in front, all the bass came from the V25s." 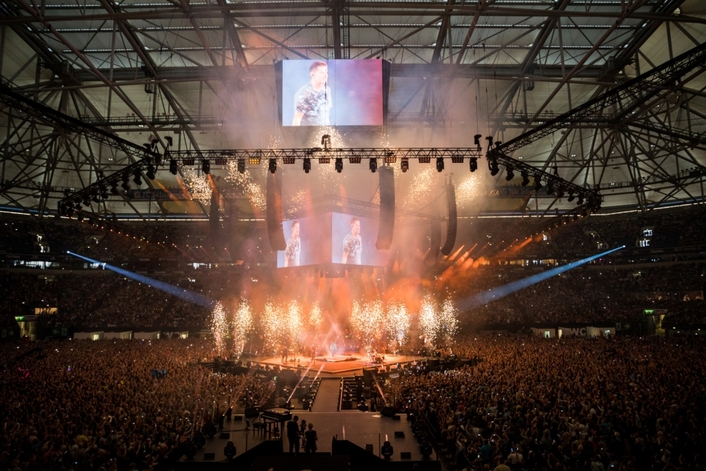 The VTX A12 is JBL's newest line array system, and feature next-generation JBL transducer technology and a high-frequency waveguide design for unmatched performance, sensitivity and coverage. Although Müller didn’t use them in the main hangs at this show, he was extremely impressed with their performance.

“They sound amazing,” Müller said. “And when I saw the measurement of their phase response, it was flatter than for any other cabinet I’ve ever seen.” 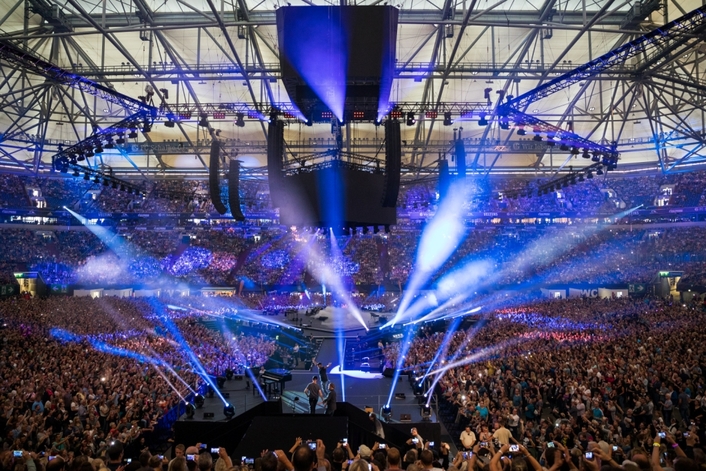 Overall, Müller was very satisfied with the way the V25-II loudspeakers were able to reproduce the entire frequency spectrum, with an extremely small subwoofer deployment.

"You didn’t miss the subs at all,” Müller said. “I like to have a kick drum that hits me in the chest, and that’s just what you got. I heard every note of the bass guitar clearly, even in that environment where you have seven to eight seconds of reverb. The 15-inch speakers in the VTX cabinets are incredibly powerful, and JBL’s standard tuning presets give you an enormous amount of low end.”

HARMAN (harman.com) designs and engineers connected products and solutions for automakers, consumers, and enterprises worldwide, including connected car systems, audio and visual products, enterprise automation solutions; and services supporting the Internet of Things. With leading brands including AKG®, Harman Kardon®, Infinity®, JBL®, Lexicon®, Mark Levinson® and Revel®, HARMAN is admired by audiophiles, musicians and the entertainment venues where they perform around the world. More than 50 million automobiles on the road today are equipped with HARMAN audio and connected car systems. Our software services power billions of mobile devices and systems that are connected, integrated and secure across all platforms, from work and home to car and mobile. HARMAN has a workforce of approximately 30,000 people across the Americas, Europe, and Asia. In March 2017, HARMAN became a wholly-owned subsidiary of Samsung Electronics Co., Ltd.