Hurst operated the lighting using his own Road Hog Full Boar console
Prodigy took their unique full-on maelstrom of mega-loud psycho-rock-rave to Israel, making some seriously deafening noise as the knife-edge excitement of their live show experience shook the Trade Fairs Centre in Tel Aviv to its foundations, complete with a lighting spectacle designed by Andy Hurst featuring over 120 Robe moving lights which helped to completely blow everyone’s minds!

The lighting kit for the one off show was delivered by leading Israeli rental company Argaman Systems from Rosh Hayain, and included 32 x Robe Pointes, 76 x LEDBeam 100s and 16 x LEDWash 600s – all from Robe’s ROBIN Series.

Some of the additional Robe fixtures needed to service this show were supplied to Argaman by Danor Rental. Sister company Danor Theatre and Studio Systems is also Robe’s very active Israeli distributor, and Danor’s own Erez Hadar was at the gig to see the lights in action and appreciate Hurst’s eye-popping lightshow first-hand, which matches the incredible energy and craziness of the music!

The Robe fixtures all feature on the festival version of Hurst's latest design for the band who launched their 2014 tour with an incendiary gig in London's O2 Arena on New Year's Eve. 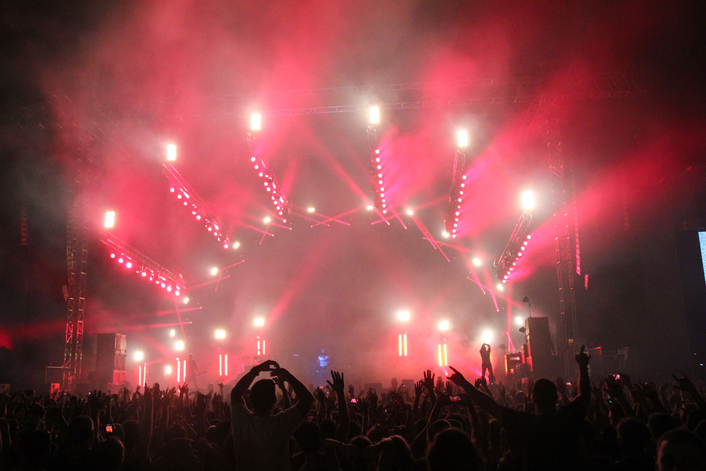 The structural element of the stage design - for both the festival and the full size / own show versions - is based on an arched aircraft hangar like concept, with Argaman reproducing a variation of it for this gig!

The full design involves 68 x Pointes - usually there are 32 on the main arch, 18 dotted around the rest of the roof, with six on the floor and eight on a 5 metre diameter circular truss above Liam's keyboard / computer riser which is the hub of the music.

Says Hurst on the Pointe, "It's an absolutely great fixture and I use every feature of it in this show - beam, spot, wash and effects - to the absolute max!”

“Pointes give me multiple options and are absolutely ideal for a show like the Prodigy which is completely manic from the first to last notes – you get through a massive amount of looks and scenes in a show like this – far more than normal – and no-one wants to see any repeats!" 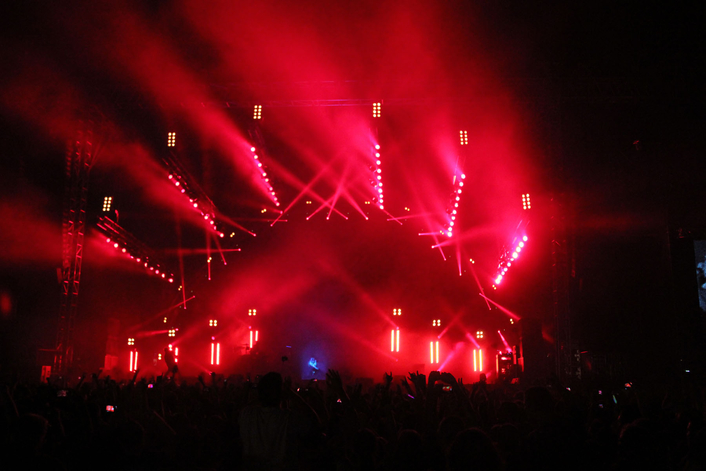 He likes the brightness, movement, gobos and prisms of the Pointe in particular. The units on the largest arch onstage are used to bring a Prodigy-esque Ferris wheel effect to the stage which is highly effective in elevating everyone to planet Prodigy!

The LEDBeam 100 has been a part of Hurst’s Prodigy lightshow since 2012. Again it's the speed, brightness and the fact that you can pack literally hundreds of the little fixtures into the smallest spaces that make it perfect for creating more Prodigy lighting madness!

LEDBeam 100s are used on six upstage/downstage 'finger' trusses on the design which are slightly raked for additional depth. The sheer numbers of them bring some great WOW factors to the equation.

The LEDWash 600s Hurst used in Tel Aviv as he always does, for his band and stage base washes and for firing up the jet fighter backdrop. 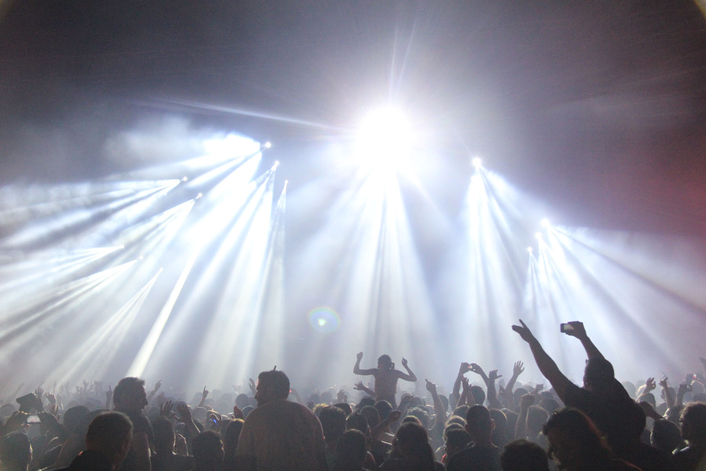 "Tel Aviv was fantastic!" enthuses Hurst, "The rig looked great, the crew from Argaman Systems were first class and the audience were well up for it - it was great all round!”

Hurst operated the lighting using his own Road Hog Full Boar console. His mix included taking the director’s cut of the IMAG into his own Catalyst media server, treating and effecting it there, then returning the feed to the vision mixer for output to screen … which enabled the requisite crazy messed-up video aesthetic to appear onscreen – another essential element of the Prodigy live experience.