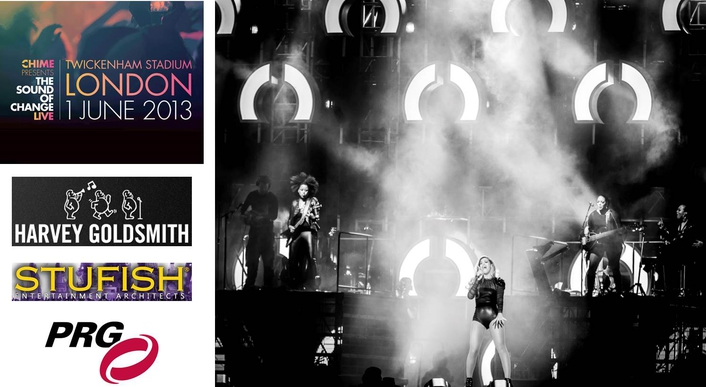 Featuring a backdrop of lightboxes in the shape of the Chime for Change logo was backed by LED screens
International production expert PRG teamed up with Harvey Goldsmith promotions at Twickenham in June to supply rigging, and lighting for the massive Chime for Change concert headlined by Beyonce and Madonna.

Dubbed a 'feminist Live Aid', the production was incredibly complex, featuring a 12 strong line up of big name stars and a 50,000-strong audience to campaign for improved education, health and justice for women around the world.

In charge of the logistics and operations was production director Jim Baggott from promoter Harvey Goldsmith: "I immediately involved PRG because I knew this was going to be an extremely complex and time restricted set up. We needed a company we could rely on 100%. For something like this we would expect eight days to set up and rehearse - but PRG had just 4.5 days to build the stage and put in all the infrastructure before rehearsals, so it was tight!"

With such a limited build time, pre-preparation of kit is key. "The entire truss is marked up, the lights addressed and the looms for each truss are pre-made and marked before it goes on site," explains PRG Account Director Yvonne Donnelly Smith. "This is absolutely crucial to facilitate a quick and efficient load in."

All the artists played live with their own bands so a revolve stage was installed for fast turnarounds between the 12 acts enabling one band to set up as the other played. However, it also meant the team had to be able to fly the back wall in and out adding further complexity to the set up.

With the formidable design team of Ray Winkler from Stufish Design creating the set and Le Roy Bennett taking care of the lighting, the show was designed for maximum visual impact both live in the stadium and on screen - TV and live video.

Featuring a backdrop of lightboxes in the shape of the Chime for Change logo and backed by LED screens, the rig had to be flexible enough to cater for each of the artist's individual looks. LD Bennett had limited programming time on site and so did most of his pre-programming in the PRG WYSIWYG suite at East Molesey.

Donnelly Smith explains: "Troy Eckerman and Harry Forster spent a few days at our WYSWIG facility in East Molesley. Troy is currently on tour with the headline act, Beyonce. We recruited Harry to programme and operate the audience lights. Together, during the WYSWIG sessions, they made sure there was show content for all of the acts performing on the show. There wasn't any programming time on site and, as it was a live show, this became a really important part of the show preparation." 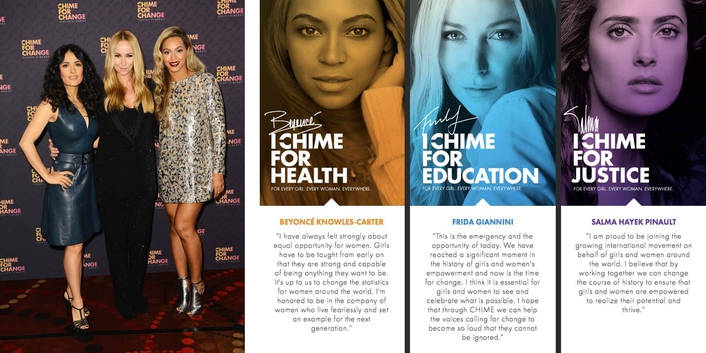 Martin Locket, Chief Executive of PRG UK, says: "We are proud to say we have a number of fantastic technical teams both out on each project's site and in the warehouse. They make servicing these multi event weekends possible. All our teams comprise skilled individuals, who can deliver top event servicing regardless of the logistical or environmental challenges they face. From riggers to production managers, designers and programmers to technicians PRG is proud to say we have some of the best talent in the world working on our behalf."

Red TX Helps Chime For Ch...e Reach Out To The World
Peter Maffay to Klitschko...elebrate the PRG LEA 2013
PRG Bolsters Role of wysiwyg on Major Events