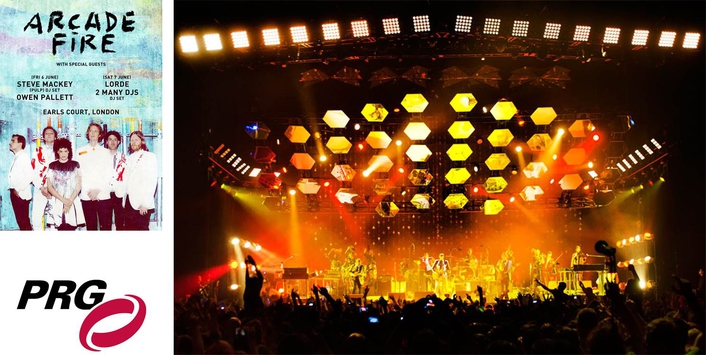 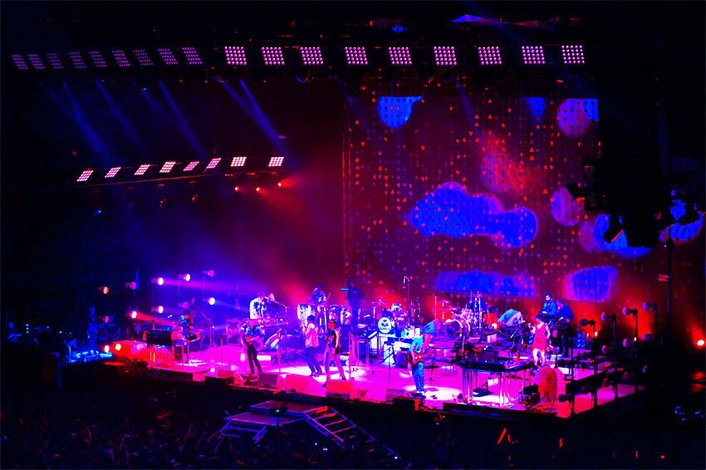 PRG added significantly to the main touring package to create the show Stembridge envisaged. A total of 20 PRG Best Boys were on the main rig along with MAC Viper Washes and Clay Paky Sharpy Washes. To fill the arena and reach across the audience an extensive rig was constructed to support a 40ft silver triangle, seven 20ft silver triangles and eight 32" mirror balls. The fixtures lighting the audience included 4 Martin MAC Viper Washes, 43 Clay Paky Alpha Beam 700s and 81 Pixel Pars.

PRG also provided the entire cable management for the London shows, consisting of over 15km of cable, 80 additional hoists and over 450m of trussing, to accommodate the over audience lighting and audio. The entire lighting and rigging package was complemented by a 10-man crew.

Arcade Fire's tour was in support of their latest album, Reflektor. In addition to the London shows, the band also performed larger gigs at Le Zenith in Paris and Sportpaleis Antwerpen in Belgium, where PRG was able to team up with their Paris and Belgium operations to support the shows.

"The Earls Court gigs were truly fantastic," says Sanderson. "The team was really pushed on this one, putting in maximum effort to make sure it happened. The crew and UK project management team, namely Ian "Bongo" Philips, worked extremely hard to make the tour seamlessly integrate between the more intimate, and the larger shows."

Collaborating with PRG in France, Sanderson worked with Laurent Boillot to supply further audience packages for the Paris shows. In Belgium, PRG was able to directly support any extras needed for those shows.

"The team from PRG as ever have been great," says Bushell. "Account manager Scottie Sanderson has looked after many of my shows over the past six years and he has always been really helpful and supportive. The kit is always in tip top condition, the crew are really knowledgeable and helpful and the company does its very best to get me everything I want within the budget constraints I present." 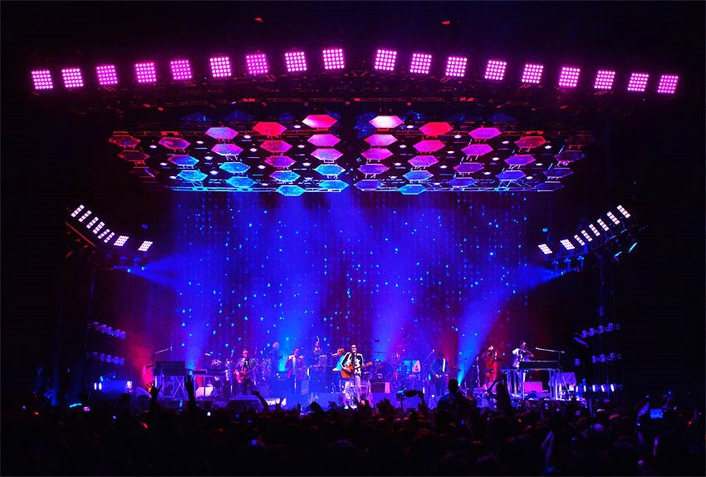 Ian Phillips, Project Manager for the London show and the tour, explains: "The biggest challenges we faced were trying to tie in a festival and headline package into one touring show. There was extensive pre-production and planning to make this happen." Arcade Fire are set to play festivals throughout Europe this summer, before heading to Japan and then the US. 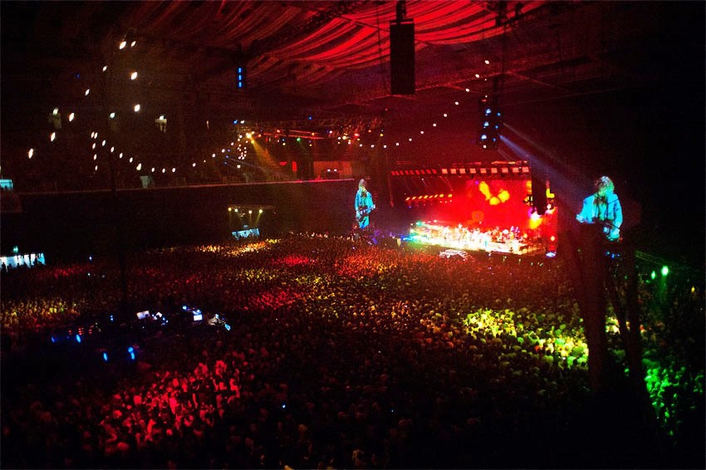 About PRG
The world's leading supplier of entertainment and event technology, PRG provides integrated services and equipment, including audio, video, lighting, rigging, staging, and scenery and automation systems, for these markets from more than 40 offices in North America, South America, Europe, Africa, Asia and Australia.PRG serves a range of markets, including concert touring, corporate events, trade shows, special events, theatre, television and film. Our company is uniquely qualified to provide the resources and services customers need at any and all sites, efficiently and cost effectively. Our staff offers years of experience serving the specialised needs of each of our markets. For a given market, we can provide a single discipline, such as lighting, audio or video, or we can bundle disciplines for an integrated solution that meets the needs of the entire project.