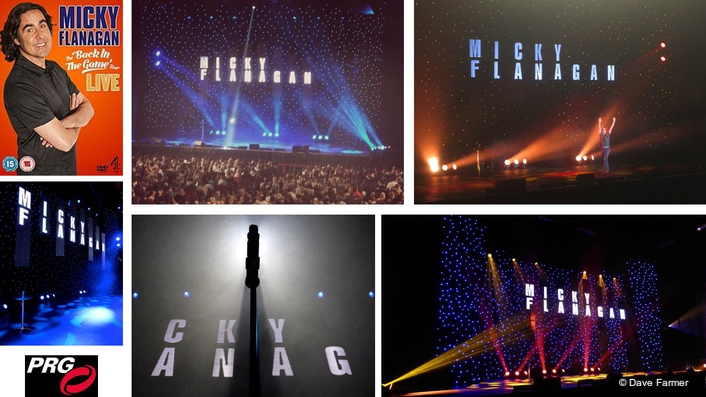 .
Production Resource Group (PRG) worked with the production team for popular cockney comic, Micky Flanagan, to upscale his summer theatre show - 'Back in the Game'. Equally successful as an arena tour, the show impressively sold out at 35 UK arenas, including three shows at London's Wembley Arena and seven at The O2.

Although not involved with the Theatre Tour the PRG team quickly responded to the increased lighting, rigging and crew requirements, while helping to maintain some of the intimacy and atmosphere of the original theatre show.

Production Manager Adam Scott called on Scottie Sanderson and his team, to help ensure the tour design would work within the budget and could be managed within the time restrictions as he explains: "Micky's show escalated almost overnight. He started the year with a 90+ date theatre tour using local production, but that quickly ramped up to an autumn arena tour. We were keen to ensure that the stage environment was familiar to the artist, just on a larger scale, and didn't detract from the act. Scottie and his team knew exactly what was required to meet the demands of the show and lighting designer - Dave 'Snakey' Farmer of THC Design - along with the artist and promoter. The wealth of knowledge and experience PRG offered proved crucial in getting it right on a number of levels."

With audience capacities ranging from 5,000 to 15,000, the show design also had to be flexible and scalable. This meant the design had to be precision planned from the off. "Dave modelled the show in WYSWIYG," continues Adam. "We produced renders and drawings early in the design and production planning stage so we could ensure we had the right balance of staging and IMAG screen size. The artist took a strong interest in the look of the show. He was particularly keen to ensure that the view of stage and artist was clear from all areas of the arena and that no-one felt they were in an inferior seat." 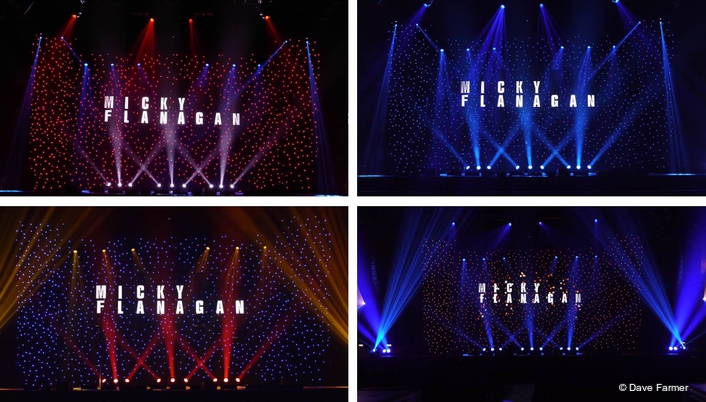 Dave 'Snakey' Farmer, continues: "PRG was challenged with providing a show with high production values that met our budget and time constraints. The opening brief was fairly loose as this is the first time Micky has stepped into arena touring. We needed to guide the artist on scaling up the theatre production. PRG was there every step of the way."

PRG supplied all the motor rigging for the lighting, sound and video equipment. Kit was spec'd in conjunction with tour rigger Seth Cook, which ultimately made for a much more efficient system. It also saved valuable truck space, as there were not three separate departments all carrying their own rigging equipment. To save further truck space, PRG suggested using a stacking truss system. "The truss was really easy to use, worked well with the video hanging limitations as there is little bracing on the underside of the truss and saved us considerable space on tour," confirms Snakey. "Everything has gone exactly to plan with PRG, from the communications with the office, the prep of the kit, pre-tour, and the excellent touring technician that PRG supplied in the shape of Simon 'Boff' Howarth and it's been hugely reassuring to know we had the PRG support out on the road!"

"From our point of view, it was an absolute pleasure to work on this project," explains PRG's Senior Account Manager, Scottie Sanderson. "Nothing was ever an issue and even though budgets ultimately decide the end result. Snakey was receptive to substitutions or practical solutions. We never had to "nickel and dime" on any aspect. Adam knows what he wants. Relationships and trust figure highly on his agenda - you can tell that from the staff he surrounds himself with.

"Snakey suggested a few options for his dream tech team, and we were delighted that Boff was available. In fact we signed off on this project several months in advance of the tour - a rare luxury indeed. PRG prides itself not only in the volume and quality of equipment it stocks, but the vast support network within the company to ensure a show is never at risk. Combine that with the skilled and experienced freelance crew, who strive to live up to and even go beyond client expectation, and it means that PRG can offer an invaluable service to all its clients."

Micky Flanagan's 'Back in the Game' tour finished at the Brighton Centre in December, after more than 130 shows.