The twelve contestants performed and were whittled down to three by a jury, from which the public tele-voted to choose the winner!

Teamwork is a great thing, and this was clearly evident for Slovenia’s 2017 PopRock Festival, a high profile national TV live event broadcast from Ljubljana, where lighting designer Crt Birsa and set designer Greta Godnic worked their creative magic in a special collaboration … with the help of 200 plus Robe lighting fixtures! The PopRock Festival, now in its second year, was staged at the Gospodarsko Razstavisce exhibition centre for the first time, bringing an interesting mix of pop and rock artists and bands who had battled it out to reach the final twelve.

The aesthetic requirement was for a high-energy environment with enough latitude for all to look different and cool - both on camera and onstage - where they were appreciated by 700 excited music fans packed into the venue to catch the action as it unfolded.

The twelve contestants performed and were whittled down to three by a jury, from which the public tele-voted to choose the winner!

A few weeks earlier, Crt and Greta had delivered another eye-catching stenographic and lighting design for the EMA, the event to select Slovenia’s 2017 Eurovision entry. The look and feel of this was so successful, that by popular demand, the producers requested that a slightly updated version be re-worked for the PopRock Festival.

The distinctive proto-industrial scenic steel crosses of the set architecture were flown at slightly different angles than before, with clusters of ‘steel rods’ providing further visual eye-candy. All these elements as well as the black gloss stage floor which was shaped to the room, were designed to have a highly physical presence as well as to take light beautifully. 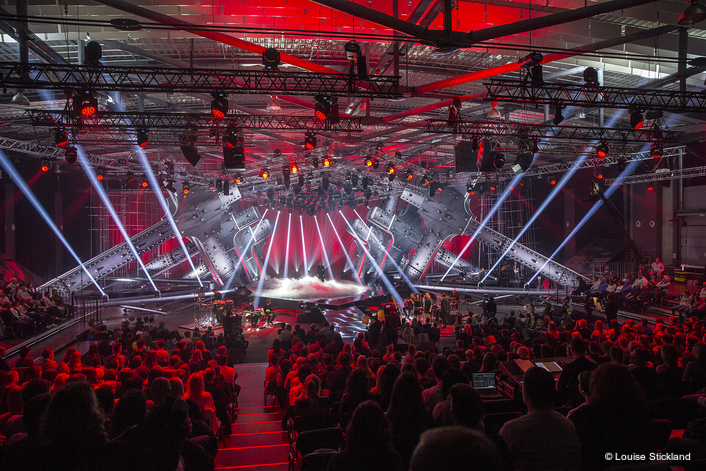 Crt is one of Slovenia’s most prolific LDs. He has used Robe products in his work for some time, and now it is usually his first choice of moving light.  “I love Robe for the excellent range, the general brightness of the fixtures, their versatility … and of course, the reliability,” he stated.

With the multi-artist line up, a live broadcast scenario and a live audience to impress, Crt selected the fixtures for their flexibility and functionality. Due to the nature of the music, he needed a vibrant colour palette and plenty of effects surprises ‘up his sleeve’.

The set crosses were initially inspired by looking at the intricate structural steelwork in the venue’s roof. Taking on the critical role of shaping of the performance space as they did, they also provided a basic infrastructure for the lighting. The crosses were lit with a combination of Robe PARFects and CycFX 8s.

With Crt and Greta working so closely together on a fully integrated design from the start, by the time it took shape onstage, Crt could finish the lighting plot in a day in terms of fixture placement. As much as he thought about how lighting would work in relation to the set elements, Greta considered how the set pieces could be rigged leaving space for lights and paths for the beams.

The lighting rig mirrored the shape of the stage floor, and the set was painted a medium grey shade, both to contrast with the floor and to respond beautifully when illuminated in any colour. Crt was also able to do some crafty accenting using strobe like effects around the set which brought everything alive. 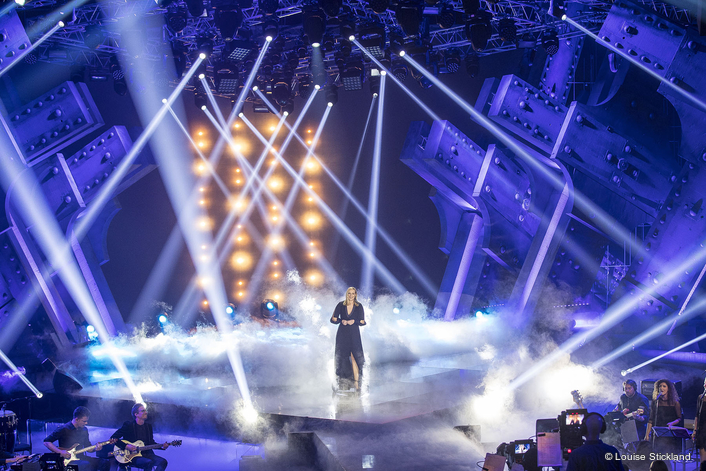 At the heart of the rig was a lighting ‘chandelier’, a square shaped truss loaded with a high concentration of lights – 16 x Spiiders, 8 x Pointes, 16 x LEDBeam 100s in a 4x4 matrix nucleus, and four Robe Square fixtures delineating each corner.

The main overhead trussing design comprised three diagonally flown squares of which the chandelier was the central one. Thirty-six Pointes were the core effects lights, with eight each loaded on to the three diamonds and the other twelve positioned around the front and to the sides of the stage.

Crt and Greta didn’t want a large imposing LED screen upstage. Instead, they decided to light through a stretched gauze back-cloth as a rear visual feature, with a mix of Sunstrips and Robe LEDBeam 100s concealed behind, then revealed for power-accents and WOW moments.

Twelve BMFL Blades covered the centre and backlighting with a row along the upstage edge of the stage deck and two behind the set at the sides.  Their huge fat beams were great for shooting out into the audience and the powerful projection capabilities helped bring a new dimension to the scenery. Two more at the back of the hall were used as follow spots.

Ten MMX WashBeams and 10 more Spiiders on the front and rear trusses were optimised to light the stage, set and orchestra.

Twenty-two LEDWash 600s washed and coloured evenly down each side of the venue with another six on the outer two squares, an ideal position to highlight the crosses and the venue’s prominent structural pillars and wash the ceiling. 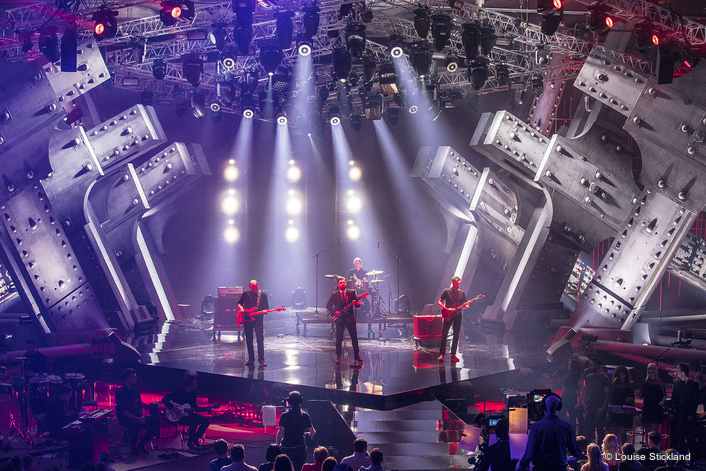 Fundamental to the lighting and scenography concept succeeding was the desire to fully embrace the building in the show environment, rather than trying to shut it out or mask it off.

The PARFect 100s – fitted with 10 and 20 degree diffusion filters - were fitted to the venue’s pillars and spread out over the floor, used for set dressing in conjunction with CycFX 8s.

Six CycFX 8s under the stage at the front were used judiciously … just enough to give the illusion that the the stage was floating, while other units assisted the PARFects in lighting the inner surfaces of the crosses and the venue’s structural RSJs. 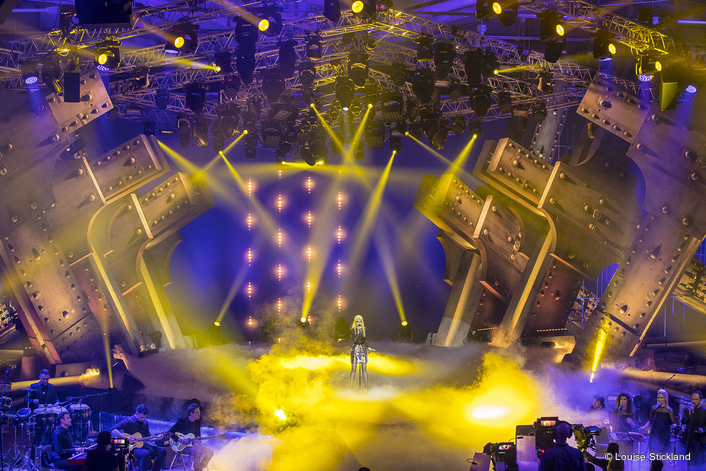 Crt programmed and ran all the lighting on a ChamSys console using a mix of timecode and manual cuing. All of the most complicated sets – mainly the rock bands – he ran manually.

He comments that having the orchestra and a live backing band really added to the vibe with richness and sonic texture, and working with the set for a second time, with all the basics in the console already, gave him a bit more time to experiment with new looks and effects for the cameras.

“Having this many and such a wide variety of Robe fixtures at my fingertips gave me plenty of creative options, so it was down to my programming skills and imagination to be able to deliver 15 completely different looking performances,” he said. 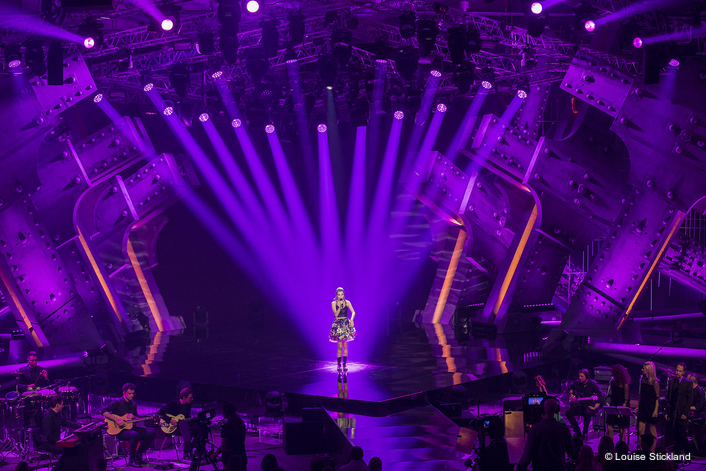 All of this looked equally good on camera for TV director Nejc Levstik as it did live - a lively, animated collage of lighting looks and scenes that also made the space look a lot bigger than it actually was!

PopRock Slovenia 2017 was presented by Anja Križnik Tomažin, Tin VodopivecPerica Jerković, and won by Anabel with her song, “A Cup of Coffee”.