Pollstar Nominates Bandit Lites For Lighting Company Of The Year 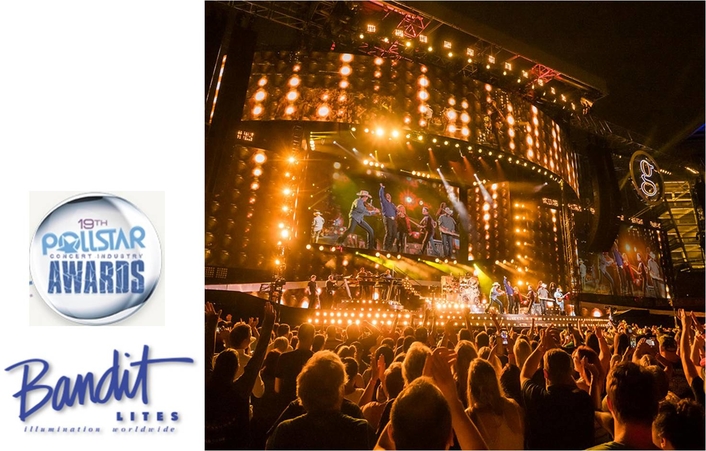 Bandit Lites, the world leader in concert lighting, is thrilled to announce it is heading into its 50th anniversary with a nomination for Pollstar’s Lighting Company of the Year.

The 29th Annual Pollstar Industry Awards will take place February 8 as the conclusion to Pollstar Live! 2018. These awards celebrate all aspects of the entertainment industry including vendors, festivals, venues, touring artists and management and are both peer nominated and voted.

Bandit Lites is the only company to have been nominated every year since the awards inception and has been honored as Lighting Company of the Year six times. This year’s nomination comes following a spectacular year lighting artists such as Garth Brooks, Alice Cooper, Kansas, The Moody Blues, Widespread Panic, Barry Manilow, Chris Tomlin, Toby Keith and Little Big Town.

In addition to Bandit Lites, additional fellow Pollstar nominees include Bandit clients such as Garth Brooks (Major Tour of the Year), Bonnaroo Music & Arts Festival, (Major Music Festival of the Year), The Fillmore Philadelphia (Nightclub of the Year), Ryman Auditorium and The Wiltern (Theatres of the Year).

“It is always an honor to be recognized by our peers with this prestigious nomination,” said Bandit Chair and Founder Michael T. Strickland. “The great team at Bandit works tirelessly every day to deliver the best people and service possible and this nod makes it all worth wile. We wish to thank all of those who trust us with their dreams and visions. We promise to always deliver. In 2018, our 50th year, we are particularly proud to be recognized as being at the top of the industry after so many wonderful years. Thank you!”

PollstarPro subscribers can cast their confidential vote for the Pollstar Awards through December 15 when the voting period closes.
About Bandit Lites, Inc.  Bandit Lites is a global leader in the entertainment lighting marketplace.  From touring productions to fixed installations, Bandit Lites has a full staff of highly trained professionals to deal with all types of lighting needs. Bandit’s global presence will insure seamless transitions no matter where your next show takes you.