P!NK Takes Off with Sennheiser

.
International superstar P!NK’s The Truth About Love arena tour is wowing audiences around the world with its incredible mixture of chart-topping tunes, aerial acrobatics, and sheer no-holds-barred entertainment – all powered by audio equipment from Sennheiser. The 140-date 2013 tour sees P!NK perform like never before, flying above the audience, dancing between two stages and diving into water – a demanding high-energy extravaganza that required custom solutions from the audio specialist.

Today’s arena shows offer ever-increasing level of spectacle, fusing sound, vision, special effects and pure performance. In taking to the road with The Truth About Love tour, P!NK has raised the bar even further, with an elaborate game-show themed concert that takes off in every sense – exploding into wild baroque performances and taking to the air with extensive aerial acrobatics driven by a wire system that lets the star travel to every corner of the arena. But how do you maintain great sound and all the emotion when everything is in motion?

Reaching new heights takes innovation
Monitor assistant and sound engineer, Ben Byford described the challenge: “With this tour, the biggest challenge is that she is so much in the air. This show takes it further than anything I have ever done just because of the distances she can fly over the audience, the height, the movement, including spinning on her own axis. It’s definitely pushing it to a new level – technically and physically for her as well. It was vital to plan for this and get equipment that worked for the job.”

As Byford explained, the production relied heavily on solutions from Sennheiser, including custom prototypes developed specially for the tour: “The whole show is essentially all Sennheiser: every microphone, every in-ear system, every radio system – it’s all Sennheiser. The in-ears we use are Sennheiser 2000 series IEM systems. P!NK uses an SKM 2000 microphone, but with an MD 9235 head. The in-ear piece that she uses is a special prototype that we’re helping to test – a custom-made in-ear with an integrated microphone.” 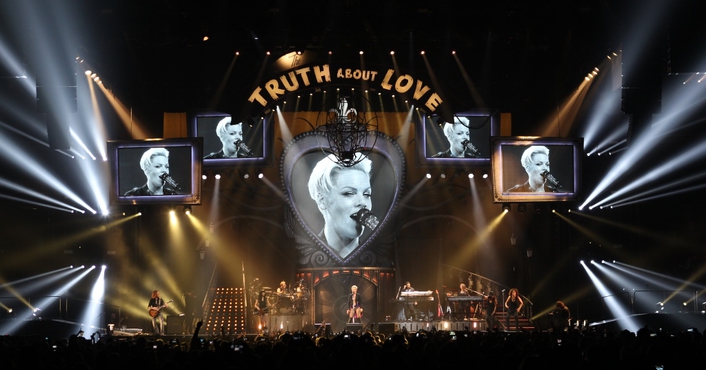 That custom solution was developed by virtuoso monitor engineer, Horst Hartmann, who worked closely with Sennheiser. He explained that developing a special integrated monitor and microphone was the only way to cope with the highly physical nature of the performance, the aerial stunts and the lifts within the dance routines: “As well as the challenge of the range of motion, we also needed to provide P!NK with a headset that could also work in front of the PA because she is often flying above the audience and through the whole room. Additionally, the microphone had to sound as good as a hand-held one and had to be extremely resistant to feedback, like a hand-held would be.” 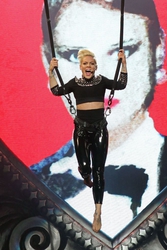 A headset with a neckband was ruled out because the set-up time would inhibit costume changes. They also needed a precise fit, as use of a cardioid mic meant that it had to stay in position right at the corner of P!NK’s mouth in order to receive the highest possible intensity of sound. On past tours, the team had used an earset mic taped in position on P!NK’s face but this time the audio team wanted to take things still further: “We came up with the idea of an in-ear with an integrated microphone,” said Horst Hartmann. “I’d seen referees, pilots, and firefighters wearing this but that’s about communication – walkie-talkie rather than the hi-fi quality we demanded. The capsule was already there: that of the HSP 4, an incredible microphone. Working with Sennheiser, we then developed the “hardware” around this capsule.”

Sennheiser developed a microphone that could be attached to the in-ear mould. With the in-ear fixed and securely in position, the attached microphone would stay in place with no adjustments. That was the theory, and in practice the solution proved a match for the demanding performance. Monitor engineer Jon Lewis explains: “Being integrated means that it’s very much set at the right position because it’s custom-made to the curve of her face, so there’s no movement. There’s nothing to tighten or loosen. So once it’s clicked into the in-ear piece, that’s it! This was perfect as any movement would have made things impossible, given the circus-style aspects of the show.”

Hartmann also describes the advantages of developing the whole solution with Sennheiser: “It’s now also one solution from one company, a simple solution that means everything is carried to the transmitter via the same cable. Much better for costume changes: You can take it off very quickly with one click, put a blind cover on it, so the connection is protected and that’s it. Sennheiser developed this just for P!NK’s current tour, and she liked it from the start. No other company offers this kind of product at the moment. And while it’s a prototype, it’s proved reliable – we don’t have any drop-outs when she is flying through the hall. It works perfectly.”

Instrument and ambience mics
For miking the band, Chris Madden, FOH, and Horst Hartmann drew on the extensive range of wired Sennheiser microphones. The 24” kick drum was miked with an e 901 and an e 902, while the hi-hat and ride cymbal were picked up using e 914s. Two MKH 80s were used as overheads. The guitar cabs were captured with a total of three e 906s. The Leslie speaker was miked by three MK 4s, with two of them positioned at the top of the speaker, and one at the bottom.

A global tour, a universal receiver
The Sennheiser EM 3732-II wireless receiver delivered a robust backbone to the audio. With a switching bandwidth of 184 MHz, the EM 3732-II can be deployed worldwide. Hartmann explains that its versatility offered a solution that would work perfectly in any venue, in any country: “This is a universal receiver that is capable of working wherever the tour lands: We use receivers that are capable from 600 to 800 MHz and can be used in America, Europe, and Asia. We do need to occasionally change the hand-held transmitters, but have two versions to cover both 600 and 700 MHz. We also love that the EM 3732-II is compatible with the 2000 series as well as the 5000s series transmitters.”

The Truth About Love – partnership counts
The flexibility of the products and the audio specialist’s readiness to go the extra mile in developing dedicated prototypes has made Sennheiser a true partner to the tour. “Sennheiser are always there for us,” said Chris Madden. “You just have to pick up the phone or e-mail and you’re being supported – no matter what you ask for.” Ben Byford agrees: “There’s no other manufacturer that you feel you can just pick up the phone and ask for advice or ask for new products. It’s definitely the aftersales and the relationship side that makes Sennheiser stand out as a partner.” For Hartmann, reliability is also key: “The most important thing is that the solutions and devices are perfectly reliable. On a tour like this, you really depend on the equipment to perform each and every day.“

“It’s a great pleasure for Sennheiser to be able to support high flying touring artists such as P!NK,” said Pierre Morant, Global Relations Manager for EMEA at Sennheiser, “Taking a hands-on and collaborative approach is the key to making these relationships successful and to delivering the best service and products. In this case, working closely with Horst Hartmann was the key to innovating a new solution that has taken our ability to deliver flawless sound to – quite literally – new heights.“

The Sennheiser Group, with its headquarters in Wedemark near Hanover, Germany, is one of the world’s leading manufacturers of microphones, headphones and wireless transmission systems. In 2012 the family company, which was founded in 1945, achieved a turnover of around 584 million euros. Sennheiser employs more than 2,300 people worldwide, and has manufacturing plants in Germany, Ireland and the USA. The company is represented worldwide by subsidiaries in France, Great Britain, Belgium, the Netherlands, Switzerland and Liechtenstein, Germany, Denmark (Nordic), Russia, Hong Kong, India, Singapore, Japan, China, Canada, Mexico and the USA, as well as by long-term trading partners in many other countries. Also part of the Sennheiser Group are Georg Neumann GmbH, Berlin (studio microphones and monitor loudspeakers), and the joint venture Sennheiser Communications A/S (headsets for PCs, offices and call centres).

The Truth about Love
Sennheiser