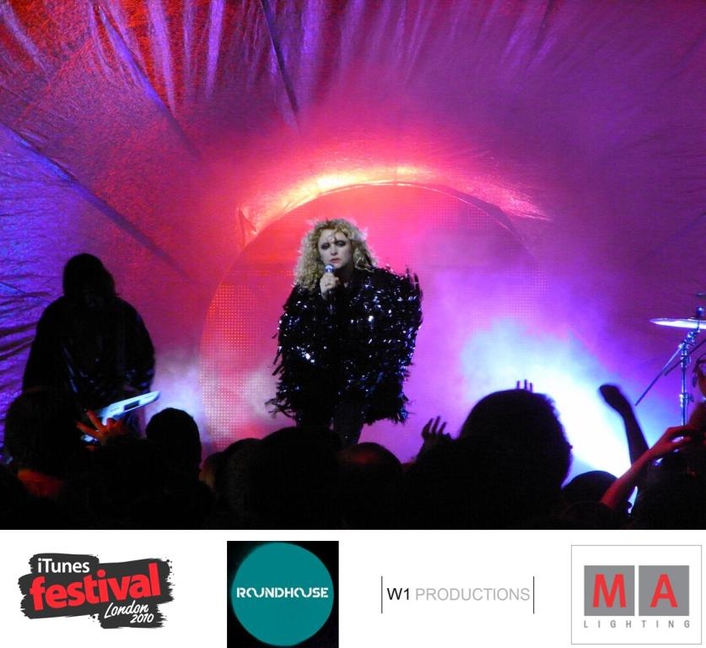 Over 60 artists were performing on 31 consecutive nights
Visuals designer Neil Trenell was using his grandMA2 full-size console and a grandMA2 light for backup to control video at London's legendary Roundhouse venue for the month long iTunes Festival, which ran for all of July.

The Roundhouse shows were produced by W1 Productions. Over 60 artists were performing on 31 consecutive nights, all being recorded and made available on iTunes, offering up a dynamic high profile mix of international artists from a plethora of musical genres. The line-up included pop, metal, dance, jazz and opera stars including the Scissor Sisters, Faithless, Ozzy Osbourne, Biffy Clyro, Paloma Faith and Rolando Villazon and many more, all of whom required a distinct look and identity for their shows. The imaginative and intelligent use of video was a large part of creating a unique presentation for each night.

It is the second year that Trenell has been video designer for the event, for which he also supplies the video front end control. He chose grandMA2 as the ideal control platform for busking video live - a modus operandi required for the vast majority of the shows. The console was triggering video content stored on two media servers. Trenell had a relatively open brief, but in keeping with the iTunes image, wanted to make it funky, contemporary and fun.

He was using a mix of library footage, bespoke created material and also individual band orientated video supplied by some of the artists, which he integrated into their show.The screen surfaces were two 2.7m x 3.6m side stage Barco I Lite 6mm IMAG screens, and onstage were five 5 metre high by 2.5 metre wide columns of the new Flyer 18mm pitch semi transparent screen - all supplied by CT London. 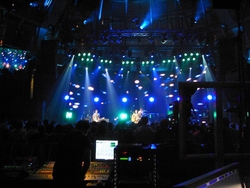 The grandMA2 consoles are both owned by Trenell's company M Squared Designs. "I really like the fact that you can access everything very quickly, and as an interface to work the servers, they are really excellent." he states. Trenell invested in his grandMA2 consoles last year and has used them constantly for all his video and lighting shows ever since.

All the live content manipulations were done via the grandMA2, and he had all the video clips - running on 16 layers - right there to hand on the desk's touch screens, palletised and fully accessible in a split second.

The system is ran via a combination of network protocols – Art-Net, HippoNet and MA-Net2. Trenell also made his grandMA2 light available to visiting LDs who wanted to programme and run their shows on it. Several LDs took this opportunity and grandMA2 continues to prove a popular choice for live shows of all types. The festival lighting rig is supplied by White Light and designed by Brian Cook.

And the Party goes on and on
Art and History: “Concert of Light” and grandMA enchant Jerusalem
grandMA at the Movies - Nine