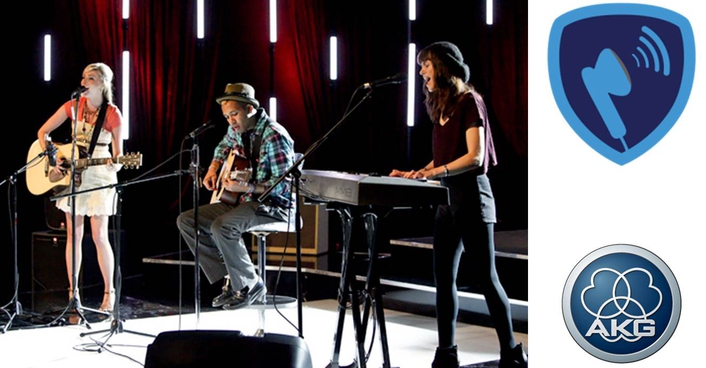 Bravo’s new music competition series Platinum Hit showcases singer-songwriters on their quest to become the next big hitmaker
It’s every singer/songwriter’s dream to have that one opportunity, that one chance to show the world why their original songs and natural talent warrant a record deal. On Thursday, May 30, Bravo’s Platinum Hit premieres on TV screens across the nation featuring a variety of HARMAN’s AKG microphones for contestants to utilize while writing, recording and performing original works for weekly challenges, working towards the final goal of a $100,000 cash prize, a publishing deal with Sony and BMI Songwriter’s The Writing Camp and a recording deal with RCZ/Jive.

With a cast of 12 energetic, talented up-and-coming musicians, world-renowned singer/songwriter and host “Jewel” and head judge Kara Dioguardi - the hit songwriter with 150 million Albums sold - and state-of-the-art recording and live performance spaces, Platinum Hit Technical Music Advisor Walter Earl required not only a 360-degree audio solution throughout the set that was easy to manage and powerful, but also a vendor with the commitment and passion matching that of the artists– qualities the show’s judges look for in the season’s winner.

“The bar was set very high as the show came together and we knew the depth of the processes throughout the season would require a system that could handle the stress of a show that relies entirely on sound,” stated Walter, an industry professional who toured with Black Sabbath for more than 20 years, Jessica Simpson, Sioux and the Bandshees/The Creatures, Bill Ward Solo, Duff and the Chambers Brothers and The Butterfly Effect.  “The HARMAN name is synonymous with decades of experience, an R + D team like no other, great customer service and of course, microphones that have been rock and roll standards for years.”

Each of the four recording studios boasts a MFXI, EON 315’s and K240 headphones, D5 vocal mics and Perception P3’s.  Guitar cabinets and instruments were fitted with the C 214 or C 414 XLS, with acoustic guitars using the C451B for stereo recordings.  The EON 515’s were utilized on the main performance stages with 510’s used for monitoring in the judging area.  Also playing drums during the live performances, Walter’s kit was mic’d using the Drum SET BIG II as he monitored the beats with Q701’s for his submix and click to the stage.

“We needed to capture the essence of what was being performed, as the show concentrates on music and lyrics more than the physical appearance of the performer,” continued Walter. “A superior mic like the C 414 XLS has the reputation of excellence in the industry and we know AKG equipment won’t let us down during taping, which is something that absolutely cannot happen with our tight budgets and even tighter schedules.  We have no time to deal with faulty technology.”

“HARMAN saw a great opportunity in Platinum Hit as it is caters to our core customer base. We really believed in the concept of the show – musicians, songwriters, producers and live sound industry professionals will truly enjoy it as song writing and producing music is the foundation of our business,” stated Nick Owen, Sales Director, JBL Professional, who worked side-by-side with Walter in formatting the technical aspects of Platinum Hit.  “With Jewel hosting, professional, well-known judges and a reservoir of talent and potential in the contestants, the show has major credibility and will definitely provide great entertainment, as well as great sound to viewers.”

Combining the different audio environments on the show presented a serious challenge Walter had to overcome.  “AKG, JBL and Soundcraft allowed us to bring in the equipment that would not only sound great, but would also connect all aspects of the show, whether recording, performing or broadcasting,” stated Walter.  “Every space on set has to be ready and able to function correctly, be taken down, reworked, perfected and sound amazing in no more than 15 minutes notice of any kind.  HARMAN solutions eclipse other companies in the industry and we can safely rely on their customer service, and equipment in general, to help us put on a great season.”

Bravo’s new music competition series Platinum Hit showcases emerging singer-songwriters on their quest to become the next big hitmaker.  The series follows 12 musicians as they battle through innovative songwriting challenges testing their creativity, patience and drive.  From dance track to love ballad, every episode will feature a different theme that will require the contestants to write and perform lyrics from multiple genres.  Their intimate life stories and personal drama will unfold within the show and in their lyrics as they compete and live together.  In the end, only one is crowned the ultimate hitmaker walking away with a $100,000 cash prize, publishing deal with Sony and BMI Songwriters, The Writing Camp, and a recording deal with RCA/Jive.