“Jukebox,” their 11th studio album, brings the group back to what originally inspired their careers with a mix of songs from the ‘50s and ‘60s. The graphics for the live shows not only tell the story of those eras, but the story of their career.

Doing the tour without a high quality video screen was not an option for production manager David Rudder, but it had to be efficient and economical. That’s where the 16-foot-wide by eight-foot-tall main 12.5mm FLEXCurtain HD wall helped support Human Nature and entertain fans.

“The main driving factor for the purchase was Australia is the same landmass as US, but with only 25 million people, so huge distances are involved when traveling,” said Rudder. “We have shows night to night that are four or five hour flights away, so the question was how do we transport a custom looking show when we have to air freight everything? And in only two 500-pound-road cases we were able to transport our entire video package, get it to a venue midmorning and have it set up 45 minutes later and working. It’s kind of thrilling considering the logistics involved.”

Risers support the main curtain as well with a combined total of 32 feet spanning the stage at a height of two feet. The ease of setup for screens of any size is standard with all PixelFLEX products. Videos and images are sent to the LED screens using any computer with a DVI-D connection.

“We are very much looking forward to having this production asset available for our touring shows here in the U.S., including the upcoming East Coast tour in August,” said Rudder. “Being able to have this level of production value for our video-heavy shows allows us to bring our full show to theatre venues – this was previously either too challenging logistically or unaffordable.” 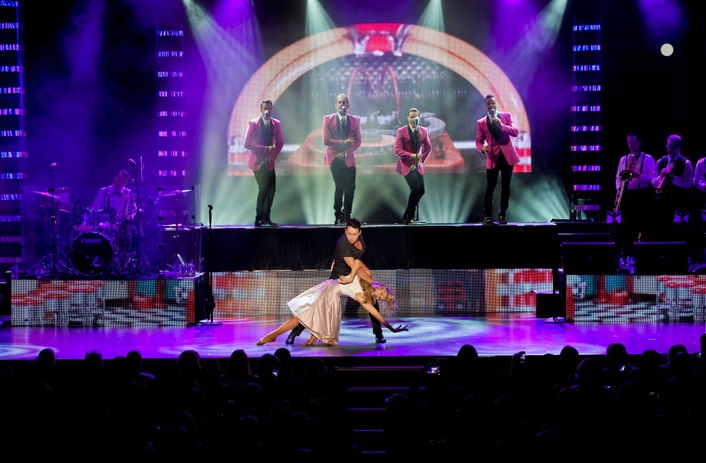 “The great thing about it is it looks like a hard, hi-res product. Someone who I know in the business in Australia came up to me at the show in Melbourne and asked where we were playing next. When I told him Tazmania, he said, ‘well you won’t be taking the video with you obviously.’ And I said, ‘yeah, I’m flying it out tonight,’ and he commented that I obviously couldn’t be making any money off of it because of astronomical freight costs. I had to explain to him and have him go up and actually touch it to see that it wasn’t a hard video wall.”