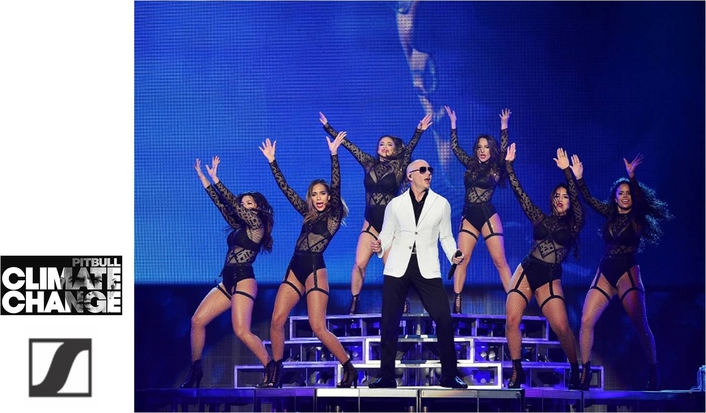 "Pitbull performs at The Axis at Planet Hollywood Resort & Casino, in an energized show entitled “Time of Our Lives. (© Getty Images)"

International superstar Pitbull, a.k.a. “Mr. Worldwide,” recently settled in at The AXIS at Planet Hollywood Resort & Casino for an eight-night limited engagement performing his energized Las Vegas show “Time of Our Lives.” The high-octane series of performances follows successful Las Vegas tour stops in 2015 and 2016 for the artist, with one difference this time around: Pitbull and his team put their recently acquired Sennheiser Digital 9000 wireless system to work for world-class sound quality and reliability.

A chance to test-drive the Digital 9000 at last year’s Summerfest in Milwaukee was enough to convince the multi-million-selling artist and his team of the system and its performance. Monitor engineer Matt Holden recalls the moment at Summerfest last year when he realized Digital 9000 was something special: “I was impressed with the sound when I heard it, but what really caught my attention was that for the first time, Pitbull came off the stage after the show and right away wanted to know what microphone we had used!”

A New Sound for “Mr. Worldwide”
The serendipitous experience at Summerfest led the team to begin traveling with a Digital 9000 system immediately thereafter on tour. They stuck with the MD 9235 capsule they had demoed at the festival, noting its clear sound and excellent rejection. “It has a really tight pickup pattern on it, so there isn’t a lot of ambient noise,” Holden explains. The capsule is also super-friendly to the artist’s unconventional microphone techniques. “Pitbull goes back and forth between cupping the mic and holding it down on the neck. But with the MD 9235 the sonic difference is imperceptible which helps ensure a consistent sound throughout the show.”

Front-of-house engineer Will Madera notes how easily the sound of Pitbull’s voice sits in the mix while using the MD 9235 through the Digital 9000 system. “The microphone system gives body and clear definition to his voice, and it cuts through really well,” he says. “We’ve got percussion, drums, keyboards, bass, and backing tracks — all of which are really energetic and loud during the show. But with the Digital 9000, there is no issue and the vocal is right there in front of everything.” 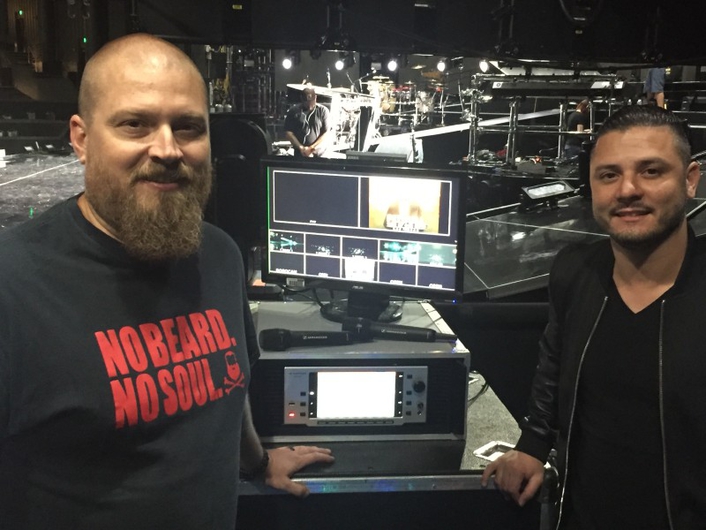 Simplicity in Any Environment
For Holden and Madera, the Digital 9000 was easy to set up and integrate into their existing rig. “The quality of the wireless and the ability to do the frequency scans internally is amazing,” Holden says. “You just dial in the lowest noise floor and don’t worry about it.”

“When we go to the larger cities like Dallas or New York, the RF person will be fighting to coordinate 96 channels of wireless. We just fire up the Digital 9000 for our wireless, do a quick scan, drop in our channels and we’re done. It takes ten minutes!” Set-up is fast and easy, but most importantly, the performance is predictable and stable: “Since we have been using this there hasn’t been one drop in that microphone at all,” Madera says.

Unbreakable Connection
The rock-solid connection between the SKM 9000 transmitter and EM 9046 receiver has given Holden and Madera the ultimate confidence that great audio will continue running through their system no matter where Pitbull’s high-octane performances may take him. “Before we acquired the Digital 9000, Pitbull’s proximity to the stage during performances was always an issue,” Holden explains. “He would go under the stage, up and down the lifts, up the catwalk, and sometimes all the way to front of house. We would sweat a little bit when he did that on our last system. Now with the D 9000, we can walk the mic all the way to the production office. Such bulletproof reliability has come in extremely useful for the Las Vegas “Time of Our Lives” mini-residency. Holden and Madera recall challenges of the past, using gear from other manufacturers: “This is our fifth time here in Las Vegas, and as everybody knows, it’s kind of an RF nightmare,” Holden explains. “On our other systems, I would have full signal bars and clean frequencies, but we would lose him if he went to certain spots and this meant we were constantly on edge. With this system, I never have to think about it and can instead focus all my energy on his mix and performance.” 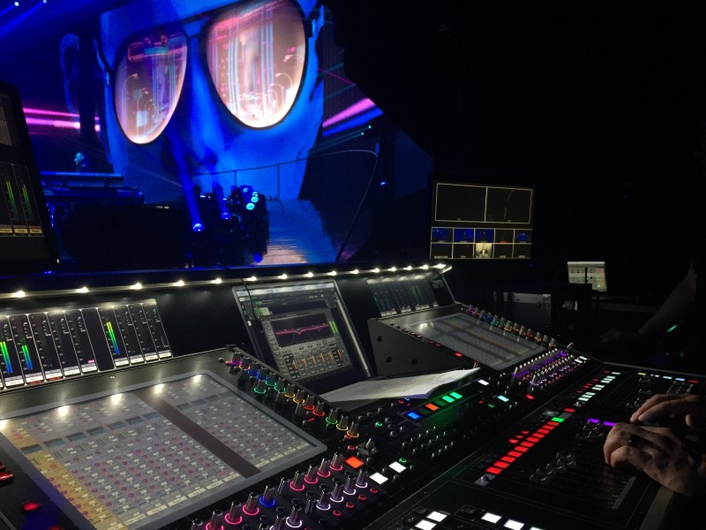 "View from stage right of Pitbull’s “Time of Our Lives” performances in Las Vegas, beside Matt Holden’s monitoring station."

Performance Unburdened
Like Holden, Pitbull thrives on the pristine sound quality and operation of the Digital 9000: “If the mix is perfect for Pitbull, he will take the performance to another level,” Holden says. “He stops thinking about the technical side and gets into the crowd. The difference in performance is very noticeable. Switching over to the Digital 9000 also proved to be the catalyst for him to start using in-ear monitors, which previously he was never 100% happy with sonically. This gives him even more freedom on stage.”

Currently, Pitbull has eight channels of the Digital 9000, which are used on vocal microphones, bass guitar, and a djembe. For the bass guitar, the SK 9000 bodypack transmitter provides controls that allowed Madera to work with the bass player to dial in the perfect tone. “I love the way the transmitter allows you to load the pickups differently,” he says. “It delivers a noticeable change in the tone of the bass, so before the run we sat down with the bass player and asked him which setting he liked best.”

Sound That Travels
Now that the “Time of Our Lives” mini-residence is complete, Pitbull is preparing to take his show back on the road. He will be co-headlining a new tour with Enrique Inglesias in the U.S. in September and October, with an itinerary that includes iconic arenas like the Staples Center, The Forum, and Madison Square Garden.

The Digital 9000 wireless system is bound to impress fans and concert-goers along the way with its studio-like clarity.  “The sound is so clean that sometimes people think that the vocals are coming from a playback system we recorded in the studio,” Madera says. “But he is really rapping and singing everything! We could not be happier with the results we are getting on this system.”