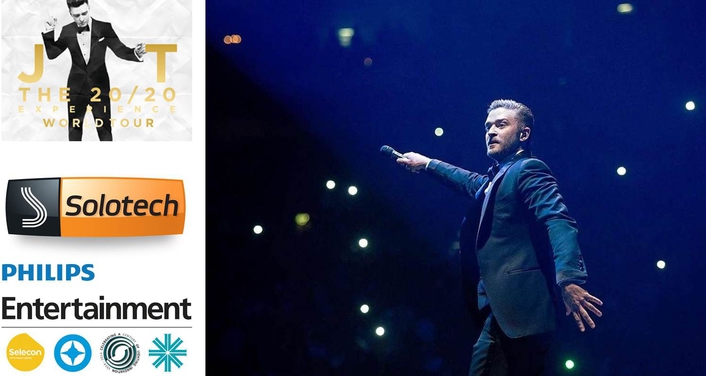 LD Nick Whitehouse specified the VL3000 Spot, VL3015 Spot and the VL3500 Wash for the tour
Live music lighting designer Nick Whitehouse is currently out on the road for a year long tour with pop superstar Justin Timberlake and he has chosen to specify Philips Vari-Lite's VL3000 range of luminaires as the backbone of his stylish and dynamic design.

Though 2014 the tour will visit some of the world's biggest arenas in Europe, America, Asia, the Middle East, and Australia. With such a gruelling schedule Whitehouse needed robust and consistent luminaires that would also give him plenty of creative options. He also wanted a luminaire that was ubiquitous worldwide. To that end he tested a number of products before settling on the Vari-Lite fixtures.

"Before every major project I take all the new comparable lights from a range of manufacturers into a dark space with haze and do a shoot out to see if there is anything that beats the Vari-Lite 3000 range in terms of look, but also taking into account size, weight and cost," explains Whitehouse. "To this day I still haven't found anything that has the right combination of features to take me away from using the VL3000. For Justin, I was looking for something smaller and lighter but the output, especially in deep saturated colours, which I use a lot in my design, simply didn't match the fantastic optics of the VL3000."

Whitehouse began working on the design process for 'The 20/20 Experience' with Timberlake in January 2013. Fixtures of choice were the VL3000 Spot, VL3015 Spot and the VL3500 Wash, which he has used to great effect throughout the show.

"The VL3000 Spot has been my spot of choice for pretty much everything I do," Whitehouse explains. "I've used it so much I know exactly how to get the best out of it, plus there are no gimmicks or unnecessary features that get in the way. I love the vibrant colour output, optic systems, bright beam and gobo effects, not to mention its reliability; as a fixture it's excellent. I can't get enough of the way the light looks in smoke and haze. To me, the VL3000 Spot is the perfect professional big show workhorse. Plus, they're such a universal fixture I can get them almost anywhere in the world." 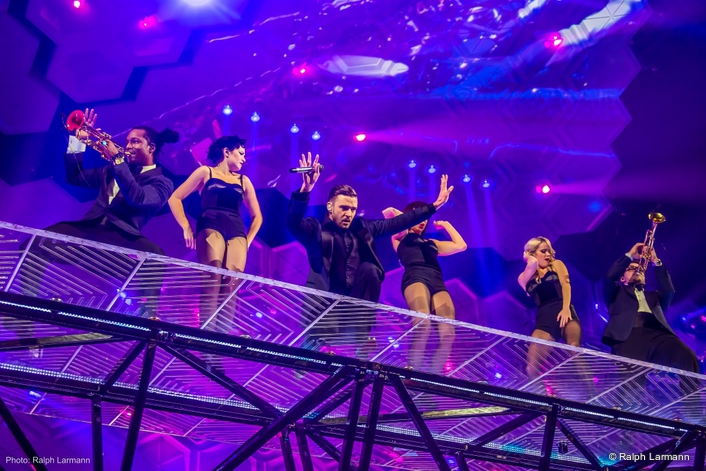 The exquisitely executed design features geometric installations in the form of a 150 by 60 foot plastic hexagon wall and ceiling. This comprises both solid and wire-mesh hexagons, through which the VL3000 Spot, VL3015 Spot and VL3500 Wash project beams of light in an array of rich and vibrant hues.

Giving Whitehouse the punchy output and creative flexibility he required the VL3015 Spot features 6:1 zoom optics, uses a 1500W double-ended short arc lamp and offers CYM color mixing, variable CTO color temperature correction, a six-position color wheel, three gobo/effects wheels, a beam size iris and separate dimmer along with ultra-fast strobe mechanisms. Two reflectors are standard on the luminaire allowing users to choose between either a peaked or flat field beam. In the peaked beam, the fixture provides 27,000 lumens of output, and in the flat field beam, an output of 22,000 lumens is achieved.

Whitehouse says that the Vari-Lite fixtures very much held their own against the show's numerous other visual elements: "Our projection is really bright, which balanced well with the VLs.There were instances when we used just a couple of fixtures to moments when the whole rig was on. At all times the VL3000s looked great!"

The Vari-Lite luminaires, along with the rest of the lighting package, were supplied by Canada and US-based rental house Solotech, including the 70,000 lumens output VL3500 Wash luminaire, which features internal zoomable beam optics with either Fresnel or Buxom options, an interchangeable front lens system, and an aperture wheel. The VL3500 Wash also features the renowned VARI*BRITE mode. From any zoom position, this mode can be engaged to offer a tight column of remarkably intense light.

The 20/20 Experience tour, which plays 129 dates worldwide, continues until December 2014.