Much-respected Halpin of Silent House and Keller, who has been expertly lighting Sabbath frontman Ozzy Osbourne for 13 years, used the fixtures to create a dramatic series of looks that saturated the stage with hues of deep purple, acid green and moody blue.

"The band wanted the look to be a big, classic rock and roll light show," explains Halpin. "We were after powerful output and feature flexibility for the design so we turned to the VL3500 Wash FX. It's a powerful workhorse in any rig and I love the beam shaper and its ability to deliver strong fingers of light. As a wash light, it provided a multi-purpose role lighting the upstage soft goods and stage set."

Halpin's atmospheric lighting complemented an eerie scenic backdrop, backed by LED screens, which evoked shadowy cave entrances. "The VL3500 Wash FX is a great fixture to pit against a video wall," explains Halpin. "Even in an outdoor scenario, the power of the beam will cut through." 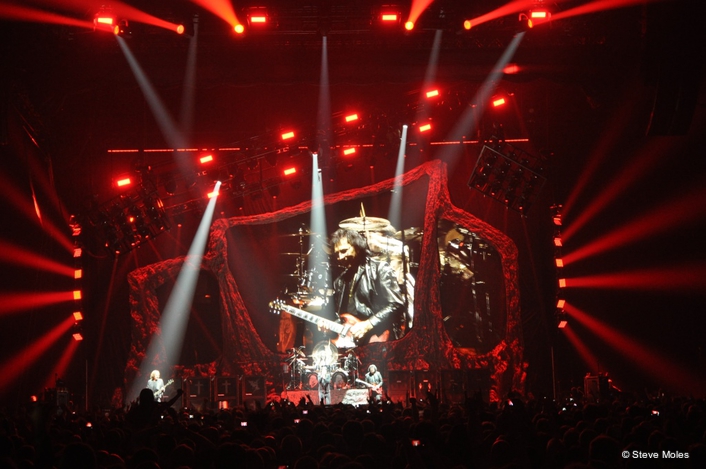 The VL3500 Wash FXs were rigged on the front truss as the main wash workhorse fixtures of the show. Halpin says he relied heavily upon the FX pattern capability throughout. The VL3500 Wash FXs also made up the floor package where Halpin and Keller took advantage of a range of patterns to weave scattered light over the band.

In the rear truss Halpin used the VL3015LT Spots as the ideal follow spot solution as he explains: "This was my first time using the VL3015LT Spot as a rear truss spot and its ability to control colour and beam whilst maintaining a solid, striking intensity made it a wonderful addition to the arsenal."

The VL3015LT Spot has the added advantage of incredible zoom range of 6° to 60°, which provides ultimate performance for long throw applications whilst delivering an unprecedented output of 41,487 lumens from a 1500W double-ended short arc lamp. The luminaire features 10:1 zoom optics, CYM color mixing, two five-position color wheels, three gobo/effects wheels and ultra fast strobe mechanisms. The luminaire includes a unique followspot mode that disables pan and tilt control and allows a person to manually position the light while all other parameters retain DMX control.  An optional followspot handle is available for simple followspot operation. 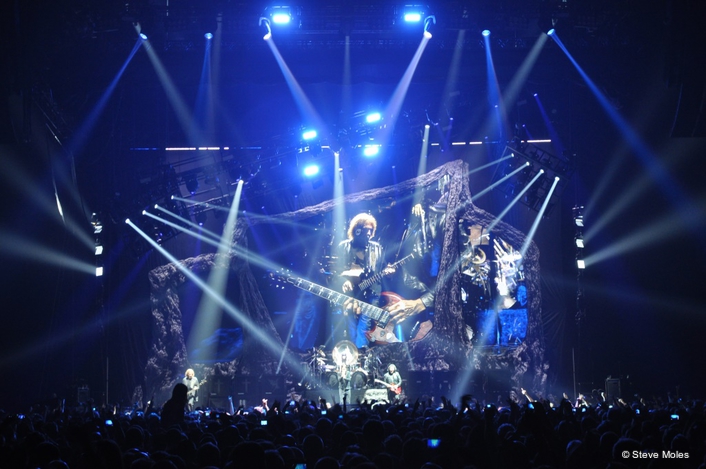 John Huddleston from Chicago-based Upstaging, who regularly supplies Vari-Lite fixtures to large scale tours including Black Sabbath, concurs: "The VL3015LT is a relatively new fixture, but so far it has had a great response in the touring market. Lighting designers have begun to transition from normal truss follow spots to this fixture because of its exceptional throw and versatility. I think it will continue to be used more readily as it achieves more exposure in the market. Its 1500W light source is definitely a pull for clients - "bigger, better, and brighter" seem to be common themes amongst today's LDs."

Philips Vari-Lite luminaires are renowned for the inherent quality and the robust aspect of their design as Huddleston stresses: "There has been vigorous demand for the VL3500 Wash FX ever since we bought them in the winter of '09. It's interesting to note that the demand has been steady for six years - that type of longevity is important to a rental business like us.

"Products with long lifecycles allow us to get a better return on our investment, which, in turn increases the value of the fixture for our clients.The versatility of the VL3500 Wash FX means that many clients continue to specify it in their rigs, and its aerial effects capability is a big hit. Both the VL3500 Wash FX and the VL3015LT Spotare consistently in demand on various productions."

Black Sabbath's tour continues around the globe this year, with shows in Canada, the U.S. and Europe, before they commandeer Hyde Park this coming July alongside Soundgarden and Faith No More.