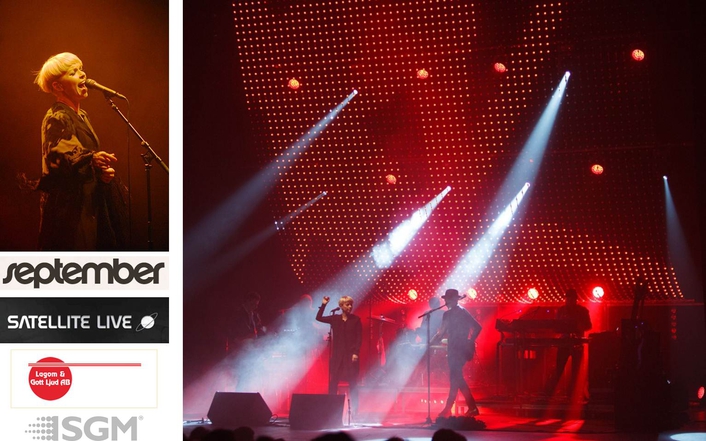 The design is the brainchild of top lighting designer Henrik Lundin, of Stockholm-based company Satellite Live.

With a quest to constantly provide unique solutions to inspire his creativity, Lundin has bought into SGM’s pioneering, next generation LED products immediately. Having used the new X-5 LED strobes on tour with Veronica Maggio and Maskinen last year, he has now conceived his most outrageous design yet for the beautiful Ms. Marklund. When the tour opened in Stockholm the impact of the pixel-mapped 3D LED balls, and the way in which the artiste interacted with them, stunned audiences.

Henrik Lundin first saw the LED Balls at London’s PLASA Show in September and started discussing the possibilities with SGM Sweden’s Mikael Uddh. “When I see a new product my head is filled with ideas,” he stated. “When I had my first meeting with Petra she wanted to create a warmer environment within the large concert halls, to give her more intimate engagement with her audience. She recalled seeing an artist using a more basic concept, with conventional lightbulbs set in balls — and that’s when I knew I had found the artiste to debut the LB-100’s in Sweden with.”

Henrik Lundin has created many unique sets for the artiste over the years — from her more Euro disco dance music to the intimate songs and ballads of this tour. Working closely with Scandinavian booking agency Blixten & Co, he sources his lighting from rental company Lagom & Gott Ljud. Mikael Uddh set up a working demo for both parties to prove conclusively that the LB-100 concept would work.

In this instance the Light Ball canopy, made up of ten PDU’s and seven strings attached to each, gives him a matrix of 60 x 56 of the balls — covering around 6m x 6.5m of a fixed 8m x 8m stage, with 6m clearance overhead to the PDU’s.

Originally designed as a video light curtain, with low-resolution 120mm pixel pitch, the LB-100 display is made up from 0,85m long strings, each containing seven white semi-transparent LED balls. Each 34mm sphere contains two powerful RGB LED’s (rated at 42mW per pixel) to create a 3D effect when viewed through 360° with a total power draw of just 42W.

Lundin pixel mapped the array using a Hippotizer media server.  The show is run from a grand MA2 console running MaNet, with three MA2 NPU network processors to give him 24 DMX universes; this is run over a Luminex network.

“In this way I can create two separate worlds, using specially made content from Hippotozier or using the balls as convectional RGB fixtures. When [Petra Marklund] performs her hit single Hands To Heaven she reaches up to the canopy and it’s as if she is immersed in Heaven, flying through clouds.”

While the LB-100’s provide an extremely powerful solution the logistics were “a nightmare”. Yet Henrik Lundin has perfected a fast rig and derig procedure for the hammock-like canopy, with safe transportation using a series of dollies and steel pipes.

“I had a to be sure this would be manageable. There are 15,000 different lighting parameters on this tour so there’s a lot than can go wrong and it was quite scary when the rig was set up for the first time. But the LED Balls behaved just about perfectly.” 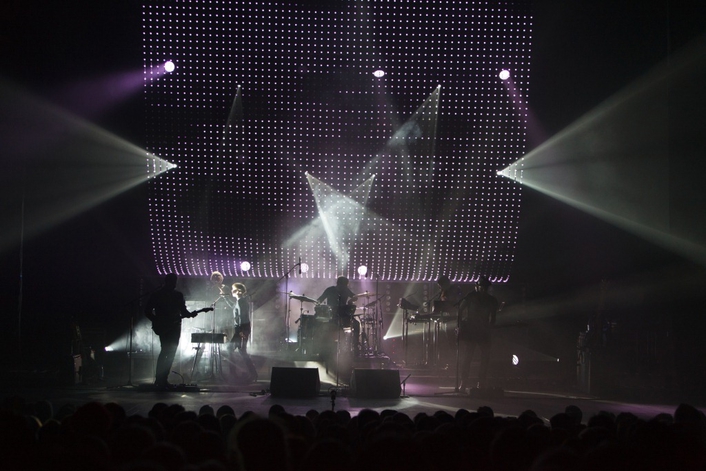 Henrik Lundin has also used four white X-5 SGM white strobes to create light behind the drummer, generally favouring ambers and natural autumn colours for the scenography to suit the personal element of the show.

Summing up the designer said, “The response has been great … everyone is amazed by the LED Balls and the solution I have created. I have received great feedback and everyone is curious how it is achieved.

Once I’ve found a cool idea I generally let it go after one tour,” he admits. But Henrik Lundin has no such intention with the LB-100’s.