LD Kille Knobel enters the new world of LED strobes
SGM’s pioneering X-5 white LED strobes are fast finding favour on the touring circuit — on both sides of the Atlantic and over a wide range of performance. One of the recent adopters has been Seattle band Pearl Jam, products of the city’s rock explosion at the beginning of the 1990’s.

Their lighting designer Kille Knobel (who has also worked with fellow Seattle rock band Soundgarden) has been with the band since the early part of the millennium — and this latest tour (which visits Europe in June), is her first outing with the X-5 strobes. It is the band’s most extravagant production to date — and has been conceived with stadiums and arenas in mind.

“We knew this production would play mainly in arenas, but also a fair number of stadium, festival and outdoor shows,” she confirms. “We also do many shows that sell 360°, so creating a show that wasn’t compromised when they sold behind the stage seats was a major component in the development of the design.”

Kille had the advantage of working with the band’s set designers, Spike Brant and Justin Collie — who both happen to be lighting designers. “We collaborated on all elements of the show and everything — from the lighting to scenery — we brainstormed as a team.  I think the project really benefits when the creative team essentially functions as a single entity.” And the X-5s have helped her with that mission.

The LD had first seen SGM’s new X-5 white strobes on a previous visit to the tour’s vendor, Upstaging, last year. “When you are programming there it’s not uncommon for them to pop by with a cool new fixture to check out.  While I was interested in trying LED strobes, I wasn’t willing to replace my conventional strobes, with their colour changers, outright. I liked the idea of a side-by-side comparison in a real show setting, but noticed immediately the power, the reliability, and the fact that there are no thermal time outs with the LED strobes.” 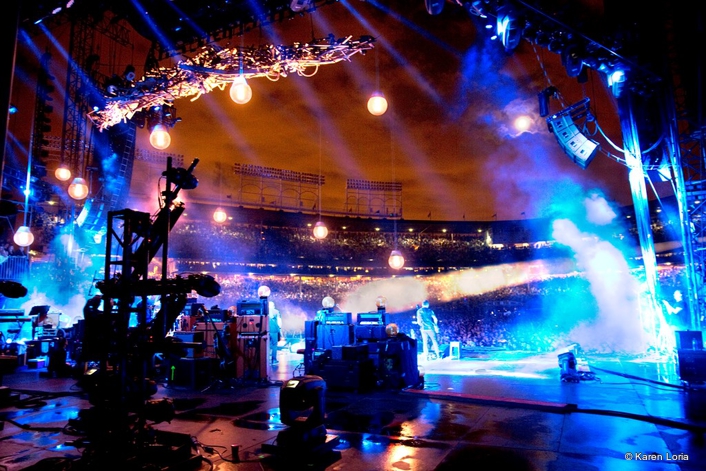 She also noticed the creative attributes of the fixture, something she has been looking to exploit right from the get-go. “One of the nice things about these strobes is being able to break them down into the individual cells for that purpose,” she observes. “The X-5 also delivers quite a powerful look. I wanted the sources to be somewhat hidden, so, I put them behind the band on the floor for silhouette and way up in the mother grid for big stormy blasts.”

The scenic elements themselves are comprised of a very large flown sculpture, affectionately known as ‘the bird.’  “It is hung from high speed Tait Hoists so we can articulate and move the bird during the show.  We have oversized lighting orbs on winches and smaller ones on the ground.  We also have three lighting trusses directly behind the bird on the same Tait Hoists.  When you have a band that plays that amount of different material show to show, having the ability to change the visual environment is critical to maintaining a dynamic experience.”

Programming the show (using a grandMa2 with a wing) is Eric Marchwinski.

Today Kille Knobel manages the delicate balancing act of pursuing her profession while raising three children — necessitating much of her design and programming work to be undertaken from home. She says she would be reluctant to give up the choice between conventional and new-age strobing.

However, she admits, “I would definitely use these X-5 LED strobes again … it would be fun to use them in an application where I could play more with building patterns and seeing the faces of the units. I really like the power and some of the effects you can get for a sustained period where a conventional strobe would thermal out.

“Although in one sense I really hope conventional strobes never go away, there are wonderful applications for LED strobes and the power savings can be really critical on some shows.  They are equally as bright as the xenon strobes and if you weren’t looking at the source I don’t think you would be able to tell.

“I think we are already seeing LED strobes in a more dominant role on shows, and I don’t think the day is far away when they will be the only strobe type on most shows.”