Paul McCartney Adopts Avid Everywhere for Historic “Out There” Tour 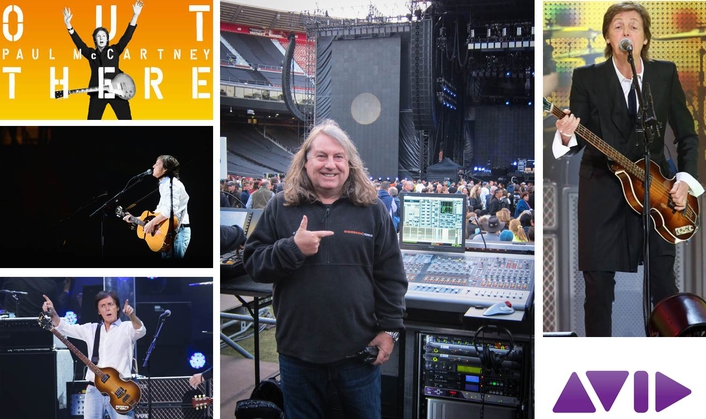 “I was using one of the first Avid VENUE systems when they came out, and then I moved to the more compact Profile System,” said Boothroyd. “With Paul, one minute we’re in a stadium and the next I’m mixing in a broom cupboard in the Cavern in Liverpool, so the Profile became my console of choice. All my effects are onboard, which simplifies my setup considerably. And the quality of sounds you can get from today’s plug-ins is amazing.”Every McCartney performance is fully documented and archived, so media management is key.

Using Pro Tools, Boothroyd can record every rehearsal, soundcheck, and concert efficiently. “We properly record everything Paul does - sound checks and shows - for archiving and for virtual soundchecks,” continued Boothroyd. “At Candlestick Park, for example, we threw in Long Tall Sally, which was something that he hadn’t done before, so that will be put away for possible future use along with the video and film footage that we also archived. If you want a proper multitrack Pro Tools recording, only Avid solutions   can give you that kind of setup.”

Using the Virtual Soundcheck feature in VENUE systems, Boothroyd is able to take shows that were previously recorded in Pro Tools and play them back through the Profile System for quickly dialing in a sound check mix at the venue without needing the band onstage. This accelerates the set-up process and provides additional time for refining snapshots, plug-in settings, and dialing in the perfect mix.

About Avid
Through Avid Everywhere™, Avid delivers the industry's most open, innovative and comprehensive media platform connecting content creation with collaboration, asset protection, distribution and consumption for the most listened to, most watched and most loved media in the world—from the most prestigious and award-winning feature films, music recordings, and television shows, to live concerts and news broadcasts. Industry leading solutions include Pro Tools®, Media Composer®, ISIS®, Interplay®, and Sibelius®. For more information about Avid solutions and services, visit www.avid.com, connect with Avid on Facebook, Twitter, YouTube, LinkedIn, Google+; or subscribe to Avid Blogs.