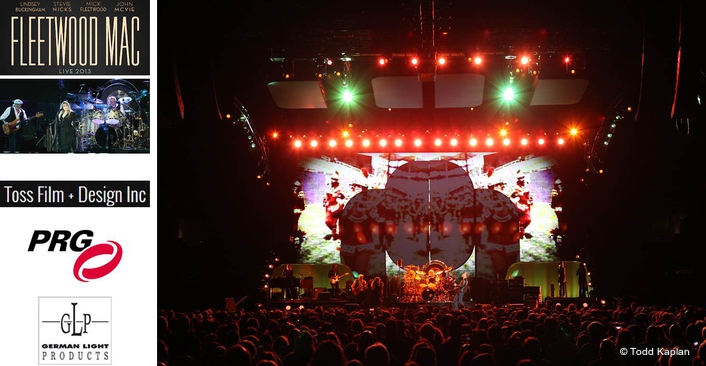 The X4 itself features 19 of the new Osram Quad Optic 15W RGBW LED’s in a slimline body with no base unit weighing just 17.5lbs. The fixture offers a 7° to 50° zoom range for variable beam spread and matrix effects, and full color mixing including CTC and customizable pixel patterns across its front face — all essential attributes for a forward thinking production designer.

The association between Paul Guthrie’ (of Toss Film & Design) and Fleetwood Mac dates back to 1999 when he worked with lead singer Stevie Nicks, before co-designing the band’s 2003 tour with their veteran LD Curry Grant and Bruce Rodgers (of Tribe Design). He then took over the reins entirely for their 2009 and 2013 tours. 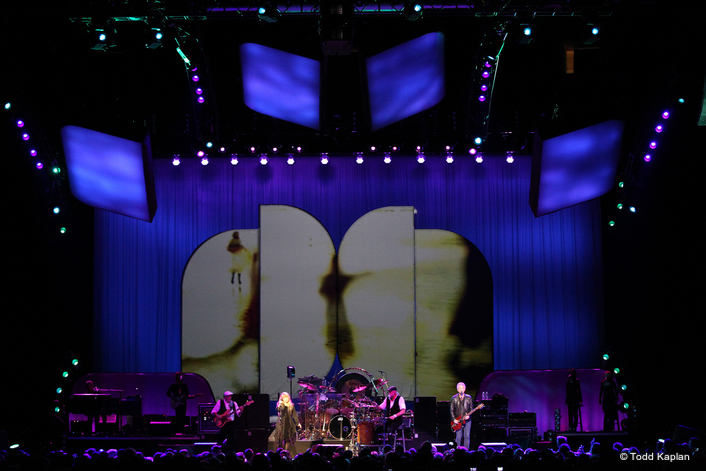 Curry’s own history with the band dates back to 1974, and since he had always used PRG as his preferred service provider Guthrie saw no reason to break with tradition. “I love their attention to equipment, service and crew,” he says.

Sensitive to the persona of the band, and their desire to carry the show themselves rather than being driven solely by the stage dynamics, the LD concedes that each member first needs to be individually catered for, before everything combines into a single production. “We try not to revisit things each time, but each member has his or her own likes and dislikes, plus there are a number of basic principles we need to adhere to on each production — such as how we light them for camera and the fact we can’t use any haze.”

With a pedigree extending over two decades Paul Guthrie had become an early adopter of GLP’s pioneering LED technology, using the original impression 90’s soon after they were released and moving onto the impression 120 RZ zooms in 2010, when Sheryl Crow went on tour. “I had been looking for a small LED wash light at the time, and these made exactly the right impression,” he said.

But as time marches on so product technology evolves. And when it came to speccing the latest Fleetwood Mac tour a number of attributes attracted him to the new generation impression X4 — notably the obvious economies to be had from the size, weight and power draw as well as the quality of colors and dimmer curve, he says. “The pixel effect of the X4’s is the most unique attribute used.”

This versatility has enabled them to perform different functions, as the LD explains. “I had some X4’s rigged high in the mother grid — for overhead effects, 16 on an upstage truss to provide upstage wash and also tone a white drape that is used for the middle section of the show … and then some on the floor under the band risers. They integrate perfectly with the conventional 1200W and 1500W [discharge] fixtures.”

Getting them to and from a gig is also a breeze, he notes. “The packaging is great — having six heads fitted in each small road case that would normally hold two lights is a great advantage.” And he confirmed that every fixture worked from first show to last without issue.

Board operator Rich Locklin also adds his endorsement that the lights are both easy to programme and fast to respond.

The two and a half hour show itself, which resumes in Europe in the Fall, is built very much around greatest hits — but the band is also promoting its current four-track EP Extended Play — their first new recordings in over a decade.

Overall, Paul Guthrie says he has been “extremely happy” with the performance of the impression X4’s on the road. “Now that the marketplace is flooded with choices for LED lighting it is difficult to criticise a light that is well designed and well built with feature sets catering to users that want good color rendering and smooth transitions,” he says.

And for lower budget tours such as Sheryl Crow — which combine promoter supplied lighting rigs with a touring floor package — they can be even more valuable. “I am using ten X4s with Sheryl and these additional impressions provide me with a super versatile effect light as well as a great wash light — taking up minimal truck space and requiring minimal current draw.”

Clay Paky Sharpy Washes J...oin Fleetwood Mac on Tour
Back on the Road: grandMA2 Joins Fleetwood Mac
GLP X4's Get Their Rocks ...off with Slightly Stoopid