Pet Shop Boys at the O2 in London
The Pandemonium Tour by much-loved British electro-pop duo The Pet Shop Boys is the first touring show to use Britannia Row’s “new” X-Line system, which has recently been turbocharged by the implementation of EV’s ground-breaking FIR-Drive (Finite Impulse Response Filters) technology. 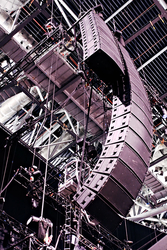 “The FIR-Drive products have given X-Line a new lease of life, it’s like a different system,” says Jerry Wing, Technical Head of Britannia Row Productions. “X-Line always was a good rock ‘n’ roll system, but the FIR filters have unleashed something that was hidden – as well as being raunchy and loud, the system now has finesse and clarity.”

Brit Row debuted its FIR-enabled X-Line at the Classical Brit Awards with system designer Derrick Zieba, and Wing recounts that “everybody noticed an immediate improvement. If it had had a minimal effect, we wouldn’t have gone for it – but the results are spectacular! Now it’s got something else, a sweet top end, absolutely sparkling, and it’s a difference you can hear easily.”

EV X-Line was used for the four large UK gigs 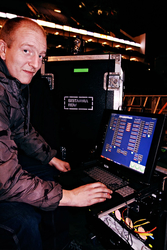 The most successful duo in pop music history, the PSBs have had Britannia Row in support for the European leg of their Pandemonium world tour. The EV X-Line was used for the four large UK gigs which closed the tour at the end of 2009, including the SECC in Glasgow, NIA in Birmingham, MEN Arena in Manchester and the 20,000-seater O2 Arena in London. Designed by Brit Row’s Nico Royan, the system in London comprised L/R hangs of 16x Xvls and Xvlt modules with 7x flown Xsubs per side, and another 22x Xsubs groundstacked at the front of the stage. Side hangs used 12x X-Line modules either side.

Front-of-house engineer Holger Schwark mixed the show on a Digico SD8. He acknowledges “a big improvement, although X-Line has always been on my rider, and is definitely one of my Top 5 systems. With all its synth sounds, the Pet Shop Boys show demands a lot of clarity as well as punch, and I’ve been pleased at how well the vocals place in a loud environment, helping me get a punchy sound from a quiet singer.”

Electro-Voice is investing in FIR technology 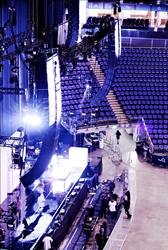 The implementation of FIR-Drive is done entirely in the digital domain, through the DSPs in the EV P3000RL amplifiers which operate in the IRIS-Net environment, and controlled via the new NetMax N8000-1500. Jerry Wing points out that his all-digital system is now more manageable: “it’s much more straightforward and easier to manage the presets in the NetMax. We had great support from Shuttlesound, especially David Howe, in setting the preliminary systems up and providing extra cards for the NetMax controllers. The sound has always been in the box, but the new electronics have revealed exciting new potential in terms of audio quality as well as easy-to-use control.”

More than any other loudspeaker manufacturer, Electro-Voice is investing in FIR technology, enabling the fine-tuning of systems to a degree which has not been possible before now. The implementation of FIR-Drive products extends the return on original investments in EV loudspeakers. Ethan Wetzell, EV Product Manager, adds that, “by adding this industry-leading DSP technology and development, we are able to take one of the greatest and proven line array systems to a whole new level of performance and sonic quality.”