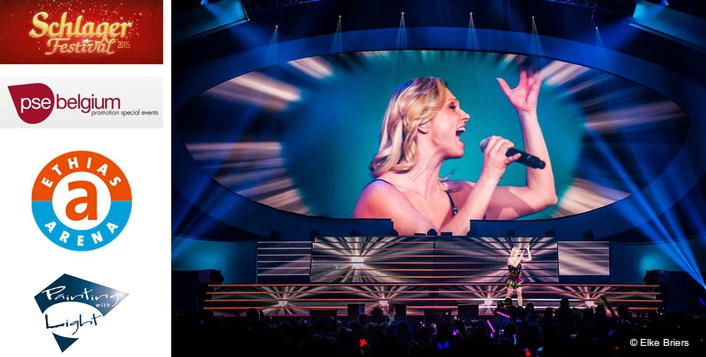 .
Event organisers PSE Belgium and the Ethias Arena in Hasselt, Belgium asked the Painting With Light team to add some extra special visual flair to the 10th annual edition of the Schlagerfestival, a live show highlighting some of the best Flemish and Dutch ‘Schlager’ genre of pop music.

The Genk based creative practice led by Luc Peumans as Show Designer, designed lighting, video and set for the event which featured five sold-out shows playing to over 60,000  fans over the course of a week as people flocked to hear Laura Lynn, Tom Waes, The Lynn Sisters, Matthias Lens, The Romeos’ and many more local heroes.

Luc has actually been involved with technical production aspects of the popular Schlagerfestival since its inception.

Upping the production values for this one, he decided on an epic wide look to match the shape and feel of the venue’s architecture, creating six scenic ‘claws’ which surrounded the set and stage and dovetailed elegantly with the lighting trusses in the roof.

The widest claw was 45 metres which had the desired high-impact effect. The claws were all covered with stretched white lycra fabric which lit fabulously, adding texture and depth to the whole scene.

“There were 30 songs performed by around 10 artists in the show which was divided into two parts” explains Luc, “So we needed plenty of variety and scope to make every number look individual”.

Upstage was a 3.7 mm pitch LED screen – supplied by PRG – which measured 17 metres wide by 7 high and was framed by ovular shaped scenic masking to be continuous with the curvature of the claws. 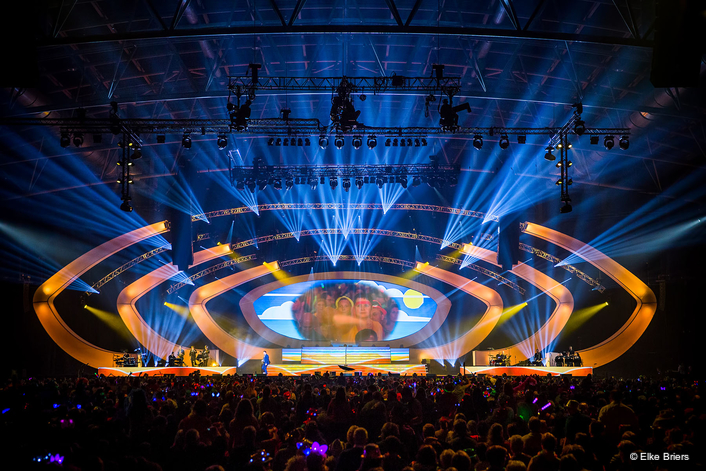 Two sets of scenic stairs – the higher (top) one of which opened in the middle for artist entrances and exits – were both clad with 20 mm LED screen material along the fronts, and the orchestra risers each side of the lower staircase and main performance space were also clad with a curved 16 mm LED surface.

A delay projection screen was flown about half way down the venue to ensure that all those at the back of the room also had a good view of the action onstage.

Playback video and an IMAG camera relay were mixed and integrated on the screen to great effect via a Coolux Pandora’s Box media server supplied by Painting With Light. 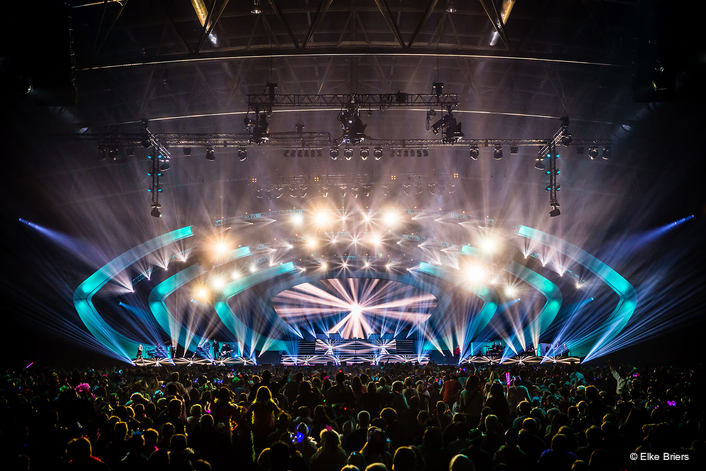 Painting With Light’s brief included making all the show’s video content, produced and co-ordinated by Michael Al-Far, which added to the slick and streamlined overall look. As the screen was high definition 4K resolution, they ran a quad core Pandora’s Box server for the main screen with a dual core machine feeding video to the stairs, riser fronts and delay screen.

Three operated cameras positioned around the venue were mixed by Video Director Hans Pancake with these individual channels and a TX feed going into the Pandora’s Box system, where they were output to screen by Operator Katleen Selleslagh.

A stage elevator was incorporated into the second set of stairs driven by a WIcreations motion system which was used for additional entrances, drama and surprise as the show warmed up. 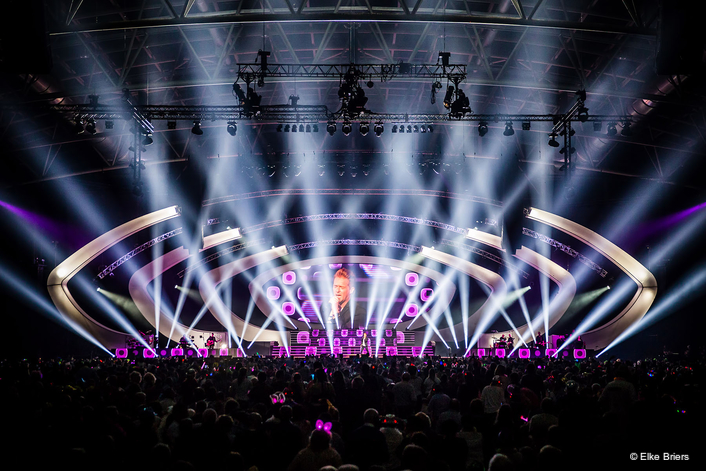 The extensive lighting rig was designed by Paco Mispelters and the fixtures chosen for their flexibility. One of the challenges of doing a show like this year on year is ensuring that there is constant freshness and variation in the presentation.

Many of the lighting challenges are generic, as with any large expansive venue, and whilst the production has to WOW and look impressive, it also has to keep a focus on the performers and the very personal nature of their stagecraft. Bringing perspective the ultimate goal with both video and lighting.

The moving lights included 84 x Robe Pointes which were rigged on the curved trusses above the stage and on the floor, and used extensively for effects, beam looks and all the things that the Pointes do so well. “It’s a very compact, versatile, lightweight fixture that is ideal for a show like this,” comments Paco. 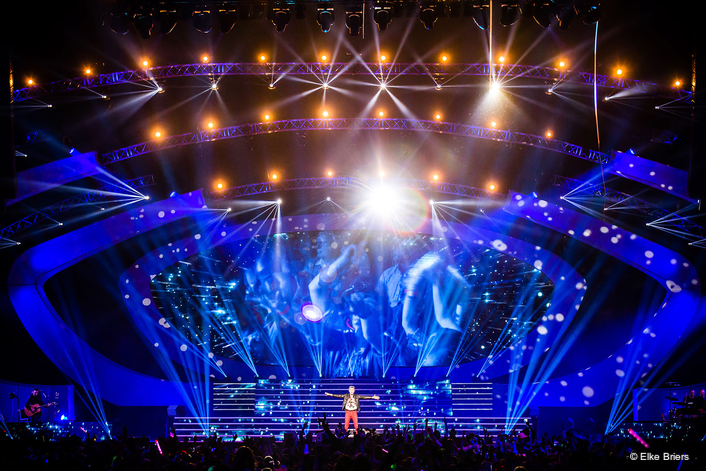 Twenty-eight Vari*Lite V*L3500Q Spots provided the primary stage key lighting for the band, musicians and soloists and also produced a selection of cool gobo looks onto the set, while 30 x V*L3500 Washes were split between washing the stage from above, with the rest positioned on drop arms off trusses flown out above the arena above the audience. Twenty-four VL3000 Spots were also dotted around the audience trusses.

Conventional lighting featured 96 x SGM P5 LED wash lights, concealed inside the set and used for illuminating the claws, for which they were perfect.

Around 120 x Spectral 1000 RGBW LED PARs were utilised for audience lighting, with another 28 picking out the exposed metal truss elements above the stage. Then there were 28 x 4-lite and 36 x 1-lite blinders and 10 bars of 6 PAR 64s for the base stage and set looks and for the blinders for encouraging the enthusiastic audience participation.

All lighting was controlled via a grandMA2 full size console, programmed by Paco and Dennis Evers, and run for the show by Dennis.