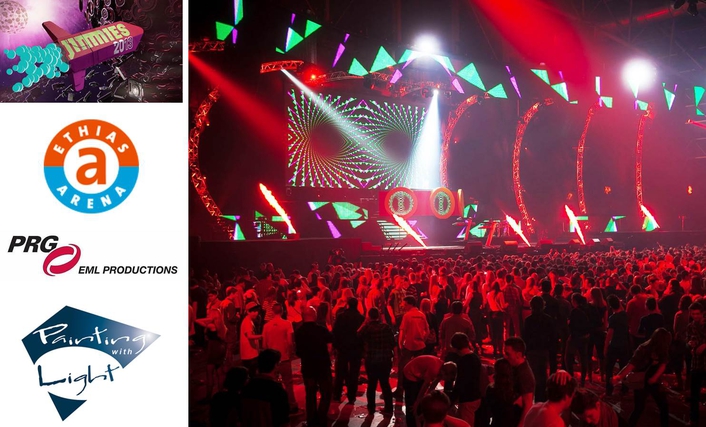 .
Luc Peumans of Painting With Light designed spectacular lighting and visuals for the 2013 Jim TV Awards AKA ‘The Jimmies’, staged at the Ethias Arena, Hasselt, Belgium, which celebrated some of the best musical talent in the country.

Peumans – known for creating innovative and eye-catching all-encompassing visual environments – was called by the popular Jim TV music channel themselves and asked to come up with something eye-catching for the occasion.

It’s the first time he’s been involved with the high profile event, which features an hour of Awards broadcast live, followed by the Jimmie’s Festival – a five hour telethon featuring the winners plus a stellar line up of other local international artists which this year included Elie Goulding, Jessie Ware, The Opposites, Coone, MarK with a K, DJ F.R.A.N.K. and many others … which also goes out live.

So the challenge was in designing a backdrop to six hours of live TV – that had to look fresh, dynamic and different throughout!
Peumans created the basic set architecture from 10 giant curved trussing arches along the back of the very wide stage, all with slightly different curvatures and forming an ellipse. 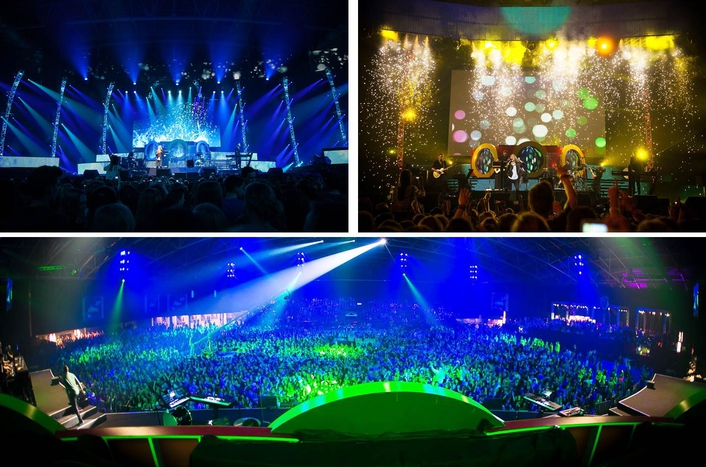 These – together with some straight overhead trusses - made ideal hanging positions for lighting fixtures – which could reach all over the stage.
For the video, he designed a large three-part border to crown the stage – essentially split into three sections to accommodate the PA arrays in their optimum position.

Below these onstage were another six sections of low level header cladding the front of the band risers and steps between the various multiple levels of the stage. All these headers and borders were made up of PRG30 LED screen – PRG EML Productions supplied all lighting and video equipment for the event.

There was also a large rectangular screen upstage centre, made up from Barco O-Lite products  together with another section of LED surface on the front of the DJ booth.
PWL specified and supplied the video control system which comprised a combination of Coolux Pandora’s Box media servers and Resolume VJ software. 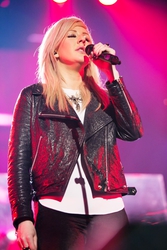 For some of the Festival performances, this was used to produce audio-activated real-time video clips, which were mixed with pre-created content produced by New Solids’ Bart Tauwenberg to Peumans’ brief.

The lighting was programmed and run by PWL’s Dimi Theuwissen using a grandMA2 full size console.
The kit included 102 x Vari*Lite 6Cs which are one of Peuman’s all-time favourite Spot moving light fixtures. He likes its flexibility, the fast gobos, the quality of the beam and the light output, “There is nothing else quite like it, ” he comments.
In addition to these, there were 28 V*L 3000 Spots and 46 x V*L3500 Washes on the rig, together with 96 x 1-cell PAR36 blinders, eight bars of 6 PAR 64s and 140 x PRG TourLED 42 LED PAR cans.
Fifty-six of the TourLEDs were used to tone the silver metalwork of curved trusses highlighting the sleek skeletal industrial look. There were also three truss-mounted Robert Juliat Aramis follow spots.
The task, explains Peumans, was to create an integrated video and lighting scheme and stage set that met the budget and provided a vibrant performance area to the Awards and the Festival – both requiring completely different visual approaches.

In addition to that, he had to cover a wide range of musical styles and the overall picture had to look BIG – both on camera for the vast TV audience, and for the 12,000 capacity audience who packed into the arena.

He concludes, “It was the first time that the Jimmies have gone this big in terms of presentation, so the pressure was on, but we were all very happy with the results. It was great to work with the full team who were co-ordinated by production Manager Walter D’Haese who we also know very well”.