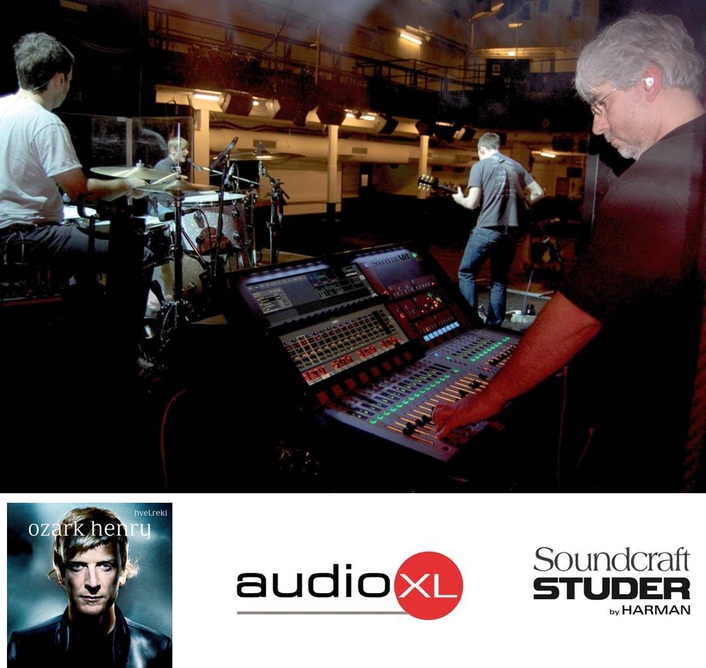 Handling the FOH mix is Tom Janssen, who also happens to be the in-house head technician at Brussels’ popular circuit venue
Two experienced and respected Belgian sound engineers are currently taking their first ride on Soundcraft’s Vi platform and loving every minute of it. Which is just as well, since the band Ozark Henry (which is also the stage name of founder Piet Goddaer) will be touring arenas up to 6,000 capacity in Germany and Benelux through the spring and early summer before playing a major part in Europe’s burgeoning festival scene — and finally continuing through 30-40 Benelux theatre dates in the Autumn.

Handling the FOH mix is Tom Janssen, who also happens to be the in-house head technician at Brussels’ popular circuit venue, Ancienne Belgique, while monitor man Marcel Cortleven has worked for many of the country’s leading bands. It was Stef De Pooter, Audio XL Belgium’s general manager, who made the breakthrough. He knew that both engineers had worked extensively in other digital environments but were looking for a change — so he suggested they review Soundcraft.

It didn’t take the two men long to discover not only the ease of use and analogue feel of the Vi platform but the flexibility, and the fact that they could accomplish extreme mixing techniques much more easily than on other consoles they had worked with. “They loved the whole structure — which was far easier to navigate than other desks they had used,” said the Audio XL man. “They found it very clean and were amazed by the sheer sound and musicality of the Vi consoles.”

A Vi4 was proposed for FOH and Vi1 for the stage — but De Pooter was already thinking way beyond. “We needed a rental company customer for the desks — and decided to make them ultimately tourable in a dry hire situation.” Enter nearby production hire outfit, M&L Productions, run by Luc Meykens. Stef De Pooter then contacted Thomas Verspaendonck from visionary cabling company, Livepower/Caponline and outlined his requirement. “They make these incredible custom patch panels and cabling assemblies, patch blocks, patching systems and panel engravings,” he said, recalling how previously they had developed universal patch panels to allow any engineer or sub-renting production company to connect up to the stage racks.

With M&L Productions moving increasingly into dry hire he repeated the commission, while for the Ozark Henry tour itself Audio XL’s in-house technical guru Udo Vanmechelen devised a fibre link that would send digital audio, data and Ethernet from the FOH Vi4 to the local rack, stationed together with the shared stage box by the Vi1 in Monitor World.

“Everyone loved the idea of a shared stagerack solution for both consoles to keep the footprint as small as possible (which helps transportation) and all the racks on stage,” said the AudioXL man. The Vi platform lends itself well to this kind of setup,” explains Vanmechelen,. “We send digital audio, data, Ethernet and even intercom over fibre to the Vi4’s at FOH and to the stagerack, which in this case is shared with the Vi1.” This provides overall analogue mic gain masters for FOH and monitors, while on the Vi4 there is still +18dB/-36dB digital trim to adjust if needed at FOH.

All of this appealed immensely to M&L’s Luc Meynkens when considering the desk. His company already runs Soundcraft’s MH3 and MH4 analogue boards as well as an impressive inventory of JBL VerTec 4888 with infra subs powered by Crown I-Tech HD amps, JBL VRX and Lexicon/BSS/dbx outboard. He had planned to enter the digital world this year in any case, informs Stef De Pooter. “Luc loved the footprint, particularly of the Vi1, and the analogue path … so this has just brought the process forward and given them more options.”

The two Vi’s supplied by M&L are packaged as a straightforward ‘plug-and-play’ system. Stef De Pooter: “The set will only go out fully packaged with digital and analogue cabling, including 12in/4out stage boxes, and made to measure snakes on multiconnectors and patch panels with no need to touch the racks.

“This kind of service is what our customers expect from us,” concludes Luc Meykens.