Over 250 Robe fixtures for Symphonica in Rosso Shows

This followed another six shows – all 12 completely sold out – in October 2015 at the same venue, which was transformed into a giant theatre space to present the concept.

Carlo has worked with Borsato since 1999 and since 2011 has been his regular LD and lighting operator. To develop the visual treatment for the 2015/16 Symphonica in Rosso, he worked closely with set designer Anne-Mari Ahola and Marcel de Vré, Borsato’s long term show designer as well as the video crew from Visual Solutions and content creator Tom van Gestel from Fabrique Fantastique. Once the set plans were approved by the artist, Carlo started creating the lighting design. 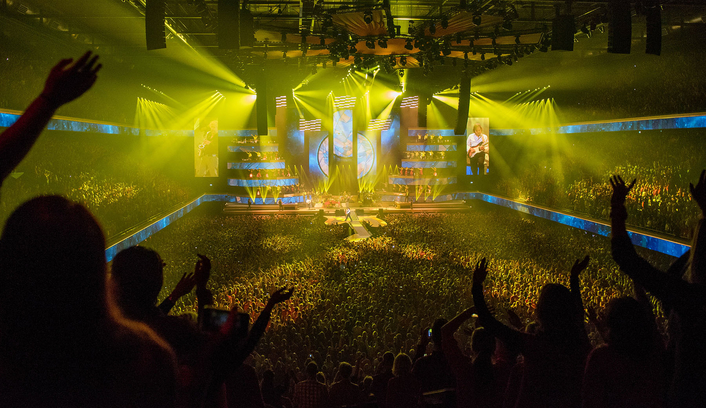 The full size orchestra was positioned on four balconies each side of the stage, all with the fronts clad in LED panels. Borsato’s regular band were centre-stage between the balconies and upstage of them was a central LED wall that split into five columns that both tracked side to side and flew up and down individually in an automation system. 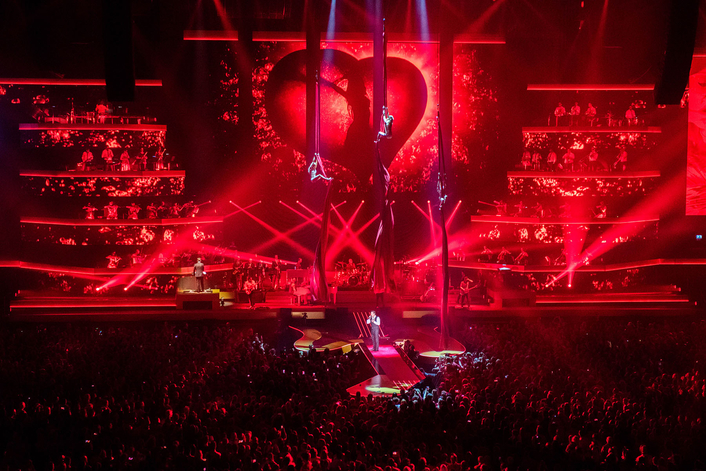 A guitar shaped thrust stage was also covered in video and worked with a Blacktrax system that tracked Borsato and triggered pre-programmed video graphics as he moved across the thrust stage floor. Two long continuous strips of video circled around the whole audience area and met up with the balcony fronts to complete a 360 degree loop and there were also left and right IMAG screens. 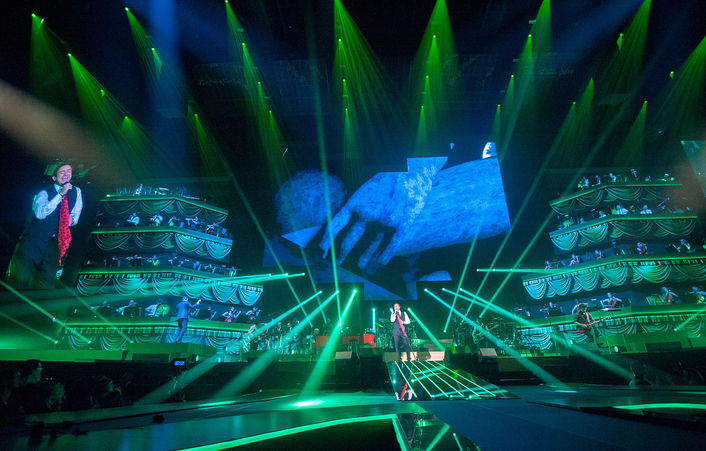 With this massive amount of video, the lighting was kept simple and straightforward, but Carlo needed it to have maximum impact …
.. and that’s why he chose 40 x Robe BMFL Spots, 59 x Pointes, 58 x MMX WashBeams, 46 x LEDWash 300s and 53 x CycFX 8s, all delivered by Ampco-Flashlight NL. 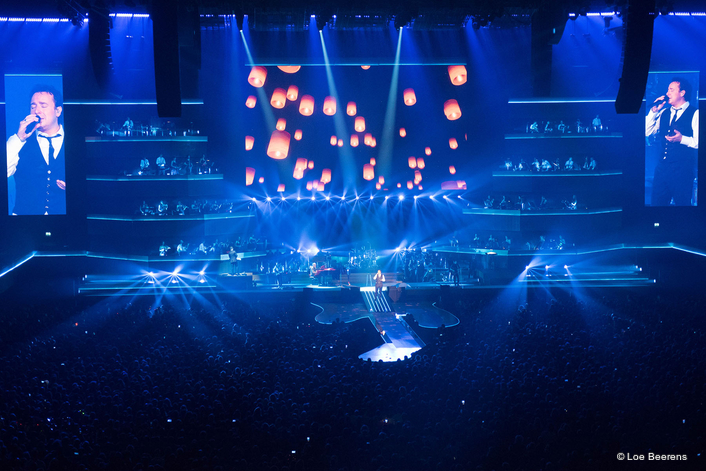 The BMFL Spots were hung on 8 upstage / downstage orientated trusses above the stage and used to create BIG monster stage looks and general audience scenes. In some of the moodier songs, they were used as dramatic single backlights for Borsato and the other performers.
The Pointes were used in multiple positions.

Fifteen of them were mounted on the five moving LED columns and utilized for all-encompassing stage looks while the screens were in their different configurations. Thirty-two Pointes were mounted on stage left and right trusses used for fillers and to augment the big BMFL looks, with another 12 Pointes on the stage deck to complete this montage of beams.

The CycFX 8s were used to light a massive curtain covering the full width of the venue right at the back. For some numbers they were used as a backlight ‘roof’ above the band and orchestra.

The LEDWash 300s were spread out on each balcony level and onstage to create a nice even wash across the orchestra and band, allowing them to be visible neatly without front light.

The MMX WashBeams had two primary positions, 42 were on the eight over-stage trusses working in unison with the BMFLs, woven into the stage and audience washes and looks. Eighteen were rigged on side trusses together with the Pointes to create a filler for the stage and double up as an alternative audience wash as required.

All these Robe fixtures were specified by Carlo for their multi-functionality.
He thinks it’s a “great advantage” to be able to use them in numerous different ways, and to have plenty of scope for creating a totally different look for each song – of which there were 31 in the set!

Reliability and precision are keys to choosing the right lights, “If you have only three lights backlighting – say three artists – none of them can be out of colour, focus or alignment. With Robes, I know I can get this repeatedly”.

He thinks Robe’s colour mixing systems are excellent – fast for the up-temp numbers and smooth and elegant for the slower material.
On the BMFL Spots … he simply “Likes everything!”

“The BMFL does everything you can possibly demand from a spot and is very stable”. The Pointes he reckons “are absolutely great for their light weight and wide range of functions”. He appreciated features like the zoom, the static and rotating gobos, the prisms and the near infinite diversity that using the Pointes brings to any stage environment.

The LEDWash 300s were perfect in this case as powerful and compact units rigged on the orchestra balconies, illuminating the musicians and the band.
Carlo likes MMX WashBeams for creating big stage washes and also for distinctive gobo effects even though they are washes! The CycFX he has found great for throwing light onto large surfaces, with the tilt feature bringing a completely different dynamic.

All the Robes and the other show lighting were controlled via a grandMA2 light console with another running in full tracking backup. The show was programmed and operated by Leon Driessen from Cuecre8ion.

“The most challenging aspects of crafting these shows,” says Carlo, “was creating the right ambience for each song – going from making the venue into one massive party vibe one minute, to closing it right down to be personal and intimate the next … just by firing up that one fixture that you need!”

“You may have hundreds of fixtures in the place, but you don’t have to use them all the time … less is more”.
Carlo has been using Robe fixtures in his work since 2012 and now believes Robe is in “a leading position” as a manufacturer, and strengthening that constantly and consistently.

Others involved in the Symphonica in Rosso shows included lighting crew chief Pascal Vergeer, the crew from Ampco Flashlight and Jo Pauly from Visual Solutions who ran the d3 media server running the playback video. The production manager was Piet Winten from MundoMatic. Faber AV supplied the LED walls and camera package, Stage Brothers the décor and Stageco NL the staging.