SAMA 18 was broadcast live on SABC, and is currently the largest televised production in South Africa.
The 18th annual South African music Awards (SAMAs) was staged at Sun City Superbowl and lit by leading LD Joshua Cutts of Visual Frontier, who included over 200 Robe moving lights in his design.

It was the first time that Josh has lit the SAMAs. He was asked on-board by TV producers Nevermachine (for whom he also lights Idols), and he and Johannesburg based set designers Dream Sets – also the technical production contractor -  brought a fresh and striking look and feel to the high profile event, produced by VL Productions.

The lighting brief was to energise and effervesce an amazing inflatable set, comprising giant interlocking circles and tubes which spanned most of the venue’s celling. This was designed by Robert Hoey and was a complete visual departure from any previous SAMA’s plus a huge hit with the client, who also asked Josh to add an edgy, classic rock ‘n’ roll touch to the lighting. 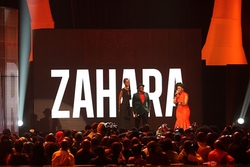 All lighting equipment was supplied via Dream Sets – run by Sean and Robert Hoey.

The trussing configuration was intricate and challenging. Firstly the truss layout had to match the aesthetics of the set, it had to practically fit in between its various elements ….  and, naturally, it also had to be functional.

He chose a completely curved trussing solution, including 9 and 11 metre sections out in the audience to give his advanced and audience lighting positions. There were a combination of circle trusses above the stage for back and side lighting.

The exacting task of rigging everything precisely in the right positions was down to the skills and experience of lead rigger, Thomas Peters.

Josh used the Robe ColorWash 2500s as highly effective FOH lighting. Their extreme brightness enabled him to quickly refocus and re-position light onto the multiple performance and presentation areas onstage. 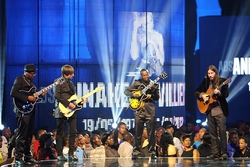 The LEDBeams were used to zap around the venue “with great results – they are vibrant and quick.” he enthuses.

He reckons the best thing overall about the rig was “The effectiveness of all the Robe LED fixtures – with such strong, rich and full colour mixing” which enabled him to meet another client requirement, which was to be able to change the set colours quickly with solid, even colouration.

The main task for the LEDWash 600s was back lighting, for which they proved “More than up to it”.

The ColorBeam 700E ATs were positioned on the floor and were “Awesome”. He used them for filling the air with sharp, bright beams in fans and matrices. They were “Pretty much the most visible stars of the lighting rig”.

Josh comments that as Robe has grown “Substantially” in South Africa in recent years – largely due to the massive efforts of distributor DWR – this makes it a lot easier to source and cross-rent enough fixtures for the larger shows. His other preferred suppliers,  MGG, also based in Johannesburg, also have a large stock of Robe moving lights.

He programmed and operated the 2012 SAMAs using a trusty grandMA 2 full size console .. and the whole production was a resounding success.