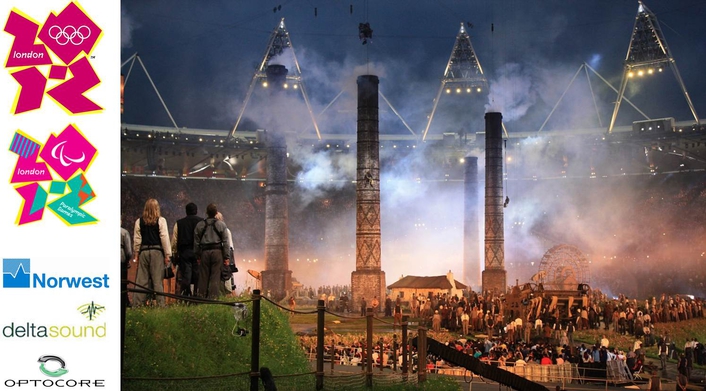 Norwest/Delta Sound set up large stadium PA/broadcast fibre transmission for Opening/Closing Ceremonies
The awe-inspiring — and completely distinctive — Opening and Closing Ceremonies, which spectacularly book-ended the London 2012 Olympics, was a triumph for the respective artistic directors, Danny Boyle and Kim Gavin.

Described as the most creative yet, to ensure the realisation of these ambitious concepts, the sound and lighting designers were also faced with enormous technical challenges.

Specialising in this scale of event production for more than a decade, Australian company Norwest Productions again teamed up with their UK partners Delta Sound to provide the necessary Optocore fibre signal transport, custom RF solutions and LAN networking. This sophisticated connectivity realised the sound design conceived by fellow Australian Scott Willsallen (of Auditoria) — another with a string of Games Opening/Closing events on his CV — in conjunction with theatre sound designer, Bobby Aitken.

Norwest’s project manager, Andy Marsh, knew that the network system required for a new 80,000-capacity Olympic Stadium would present challenges. “We needed to overcome difficult cable runs,” he said. “The cable installation took us in excess of three weeks and was more akin to installing cable permanently into a venue. On top of this, the inclusion of many fully live musical acts — adding further size and complexity to the Optocore and backup systems — placed a considerable load on all the experienced audio engineers involved.”

Optocore has long been at the heart of Norwest’s main digital systems — and more than 50 devices were deployed in an inventory shared with Delta Sound.

Since the specification had called for all Optocore ‘R’ series devices, Norwest purchased a number of these new energy-efficient converters to accommodate the design’s high channel and node count. They added quantities of DD4MR-FX, DD32R-FX, X6R-FX-8AE/8MI, X6R-TP-8AE/8MI, X6P-16IN devices to their inventory — these offer increased features and efficiency, reduced carbon footprint, power consumption (of 40%) and cost. Delta Sound also purchased a quantity of DD4MR-FX, DD2FR-FX, and X6R-FX devices for the event.

“Optocore is unique in its ability to matrix a high channel count over large distances, plus providing the redundancy of a ring network,” states Marsh. “Most significantly, it is extraordinarily robust and reliable, which is essential to a show that is playing to 80,000 people live in the arena and four billion watching on TV.”

The main 24-node ring collected and distributed all inputs and outputs on a 2Gbit network to a myriad of broadcast and PA locations, and Optocore also delivered both PA and monitor feeds, plus timecode and programme. In total there were 696 I/O channel feeds within the Optocore topography.

This was one of the first uses of the German company’s new 2.21 protocol, which enabled 2Gbit bandwidth operation — and was crucial to meet the main requirement of a high channel count. Another unique feature of the set-up was that Norwest were using all 24 ID’s — taking advantage of the maximum capacity of the fibre ring. They also used a quantity of Optocore’s TP devices, which provided a Cat5 extension of the ring.

The broadcast ring, meanwhile, tied the main system to the Delta Media truck for all necessary I/O. Delta Media delivered downstream mixes of playback, live and atmos mics to both CTV and OBS for their broadcast of the ceremony.

In the transmission path, all signals were converted to digital on entering the Optocore environment, while the back-up system ran analogue from the DiGiCo console SD rack outputs. The feeds were delivered via AES to a massive FOH PA comprising entirely L-Acoustics components, with 220 VDosc, 100 Kudo, 55 Arcs, 88 SB28 subs and some 12XT fills — all driven from LA8 amplifiers.

In summary, Andrew Marsh can reflect on a highly successful implementation in which Norwest confronted numerous challenges along the way — including the siting of some of the equipment. But then again these were unique shows.

The Opening Ceremony was described as “madcap, surreal and moving” — evolving historically from green rural life via the belching chimney stacks of the Industrial Revolution to the internet age. The second was billed as ‘A Symphony Of British Music’ and tipped as 'the best after-show party that's ever been’, featuring 4,000 artistes, with cameos by The Spice Girls (performing on top of black London taxis, travelling around the athletics track) and Monty Python’s Eric Idle providing some of the more memorable moments.

“We all worked seamlessly together to make this a huge success, and the relationship between us could not have been better.”