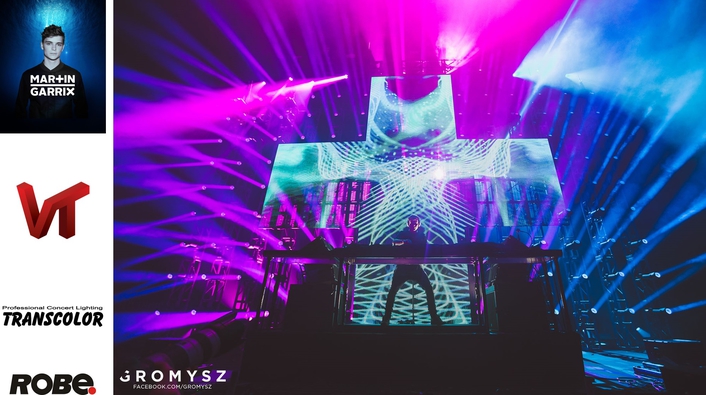 Netherlands based Martin Garrix is among the hottest DJ / musician / music producers of the moment, currently playing events and festivals worldwide, sharing his unique sounds and building a vast international fanbase. He premiered a large part of his debut album this year during an incredible main stage set at ULTRA Miami … which was also the first show to feature a new production design by Michael Fullman, creative director of LA based design and interactive technology specialist, VT Pro Design.

The lighting specification for this design is based on Robe moving lights, with 28 x BMFL Spots and 68 Pointes topping the rider. Currently, the tour is working as an ‘advanced’ design, with all kit provided worldwide by local vendors.

The BMFL Spots make up the bulk of the overhead fixtures while the Pointes are mainly located on the multi-tiered deck. Between them, the two sets of luminaires provide a vibrant and exciting show to match the vast energy of Garrix’s performance. 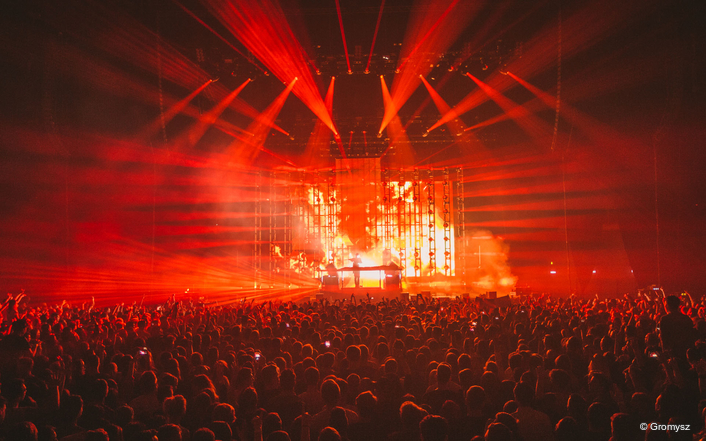 Martin Garrix show at the Tauron Arena in Kraków

Michael explained that the BMFLs are the workhorse fixtures, doing lots of beam and profile animations, filling the stage with color and atmosphere, while the Pointes are used for complex beam patterns and intricate point-focus work. He added that the ability to blend both fixture types together really enhances the visuality of the show.

As with many electronic artists, there is also a substantial video element to the design, so bright fixtures are essential to make an impact. The set is punctuated throughout with lighting and video accents and huge moments of visual power when all the media elements - including the music - are communicating in unison.

BMFLs were chosen for their speed, color and animations. “They are incredibly bright and dynamic for the size of the fixture and work beautifully with the rest of the rig,” said Michael.

He likes the Pointes because of the tight beam, speed and the accuracy of the optics.

Michael and his team at VT Pro have been using Robe products generally in their work for the last few years, but since the BMFL was launched two years ago, they have become the go-to spot fixture. The have been “incredibly useful” for our designs. 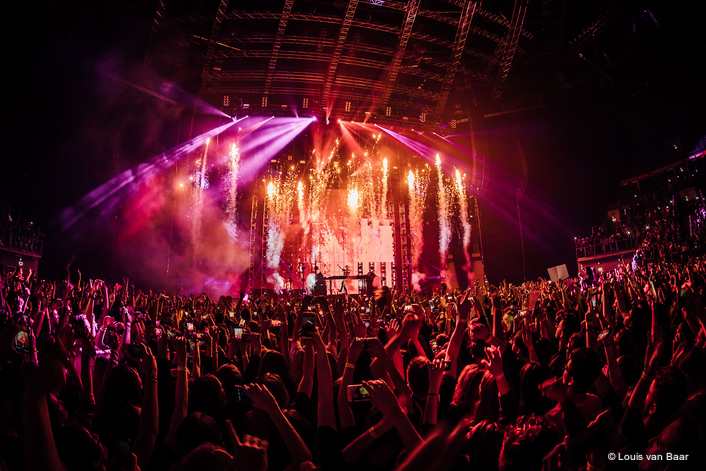 Gabe Fraboni is on the road looking after lighting and video on the Garrix tour, and works closely with VJ Lorenzo de Pascalis

The biggest challenge in creating a show like this, Michael feels, is having a design that is fluid enough to be evolved as the artist is developing the performance and adding new music all the time.

Michael believes that Robe is currently “right at the cutting-edge of innovation in lighting, giving designers a lot of options and tools to work with and fixtures that can really push the boundaries of creativity.”

VT Pro’s Gabe Fraboni is on the road looking after lighting and video on the Garrix tour, and works closely with VJ Lorenzo de Pascalis (video content is produced by Comix in the UK). The tour manager is Aubrey Wright and Martin Garrix is managed by Michael George and Waste De Jong.

2016 continues to be a frenetic year for the popular artist who released his second single ‘Lions in the Wild’ in May, followed by ‘Oops’ in June, initially a promotional single which became the anthem for E3 2016 (Electronic Entertainment Expo). Alongside all the recording activity, his live touring schedule continues to be equally as hectic! 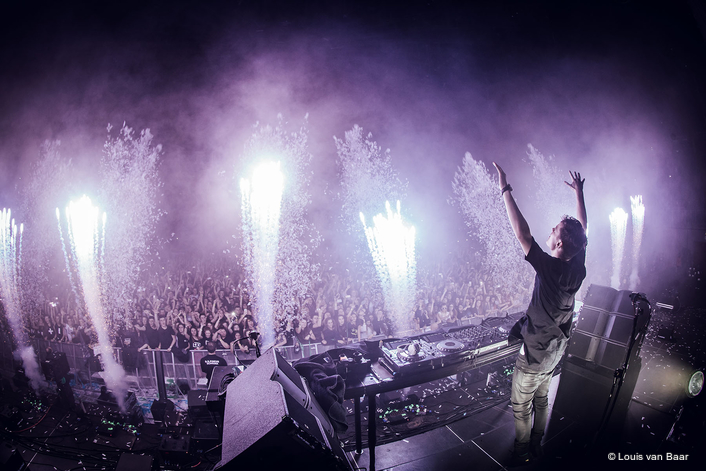 BMFLs were chosen for their speed, color and animations

On a recent show at the Tauron Arena in Kraków Poland they used 90 Robe Spikies – supplied by rental company Transcolor – which were rigged in pods and configured as a grid around a plus-shaped LED wall. Gabe had been using them for some months on the Pretty Lights tour and “absolutely loves them”. The original fixture spec’d for this aspect of the design was for a competitor product, but when Gabe started using Spikies he was so impressed that he changed the Martin Garrix rider!