Only CBS – only with Dataton WATCHOUT 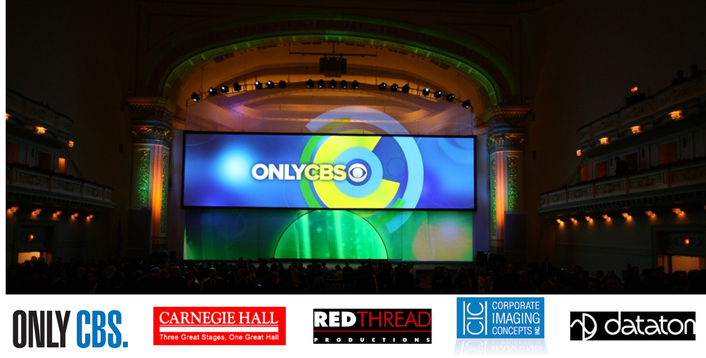 The prestigious annual event at New York City’s Carnegie Hall is a well-choreographed creative and technical experience that brings the CBS Television Network's Primetime lineup to life for advertisers. The collaboration brings together the many talents of a litany of TV and event veterans. From set design (by Tribe Inc.'s Bruce Rogers) to the projection and video routing expertise of Video Applications, to the graphic design talents of Red Thread Productions, (led by head designer, Agnes Punsalang) and the technical mastery of Corporate Imaging, Inc, (directed by the company's principal, Keith Tromer), this year's show may very well have been the most visually spectacular yet.

“CBS Upfront happens in the third week of May each year when television networks host massive presentations in New York City to introduce their new shows and fall schedules to the advertising community... ” explains Keith Tromer, owner of Corporate Imaging since its inception more than two decades ago. “It’s the type of event that gets a lot of press, internationally as well as nationally. It is broadcast live to various cities and is also webcast. 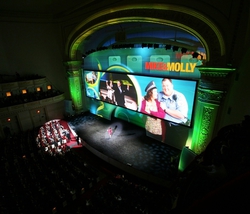 “It’s all about the wow factor, so, in our capacity of designer, animator and technical director, that’s what we go for. There’s always been more than a single screen, but the challenge is that the screens keep getting bigger every year, and there are more and more of them.”

Tromer and his team had used WATCHOUT, Dataton’s world-renowned multi-display presentation and production system, for previous CBS Upfront shows, but none was as demanding as the 2010 edition. “No other system could have done what WATCHOUT did for this project,” asserts Tromer.

With video content covering the entire proscenium opening of the Carnegie Hall stage and even beyond into the architectural columns on either side, the total image size at the event was a colossal 80ft wide by just over 38ft high. Size was not the only issue, however, as Tromer explains: 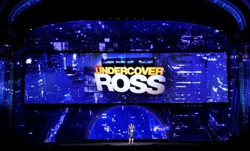 “There were three different elements that we needed WATCHOUT to bring together so that they could be used individually or merged in different combinations, depending on the demands of the content. The main screen or ‘Hero Screen’, as we called it, was a three-projector blend totaling 4320 x 1080 at a resolution of six pixels per inch. In addition to that, we covered the scrim and columns with four projectors in quadrants, measuring 3590 x 1709 at 3.74 ppi – in these projectors we masked out the Hero Screen area and the proscenium arch opening. Lastly, there was an LED wall 3ft upstage in the opening with a resolution of 2.117 ppi – this was used for speaker entrances and as a camera background.

“WATCHOUT’s Pixel Density Correction feature enabled us to treat the entire surface as one seamless area, with geometry continuing from one surface to the next - despite the differing resolution, scale, and contrast of each element. Scaling of the different projectors took place automatically.”

Tromer adds that WATCHOUT’s ability to play back pre-split animations was vital to his team getting the overall projected resolution they needed from the graphics and animations that were created for the show, while the ‘Compositions’ feature, a recent addition to the software, enabled all the content to be processed and programmed using WATCHOUT. Finally, the ‘Layer Tiers’ feature allowed designation of certain media elements and marks to be projected on some of the surfaces and not others.

WATCHOUT has been used successfully for such events in all corners of the globe, but Dataton’s Marketing Manager, Fredrik Svahnberg, believes the Carnegie Hall show to be one of the most demanding, for business reasons as well as technological ones. “When you have an audience comprising experienced advertising professionals, you know that they are not going to be easily impressed, so the pressure is on to create something unique,” Svahnberg reasons. “We’re delighted that Keith and his team were able to deploy WATCHOUT in such a creative way, producing results that were genuinely fresh, dynamic, and exciting.”

And Keith Tromer concludes: “We were very pleased with the way it all turned out and the client was ecstatic. When you’re working on a project like this, you can do a lot of pre-planning in the months beforehand but you don’t get the final script until maybe a week before the show. Load-in time is also very limited to one day. So you need a system that just does the math and works when you set it up and put it in place – that’s exactly what WATCHOUT does.”

Renowned Swedish show control developer and manufacturer, Dataton has firmly established themselves on the international market since the 1980s. The company's flagship products include the award-winning Dataton WATCHOUT™ multidisplay production and presentation system as well as the intuitive Dataton PICKUP™ audio guide. The latest addition to the product portfolio is the WATCHOUT Systems Manager, incorporated in the latest version of WATCHOUT. The systems manager is a powerful tool kit for creating interactive front ends to control high-impact WATCHOUT presentations.