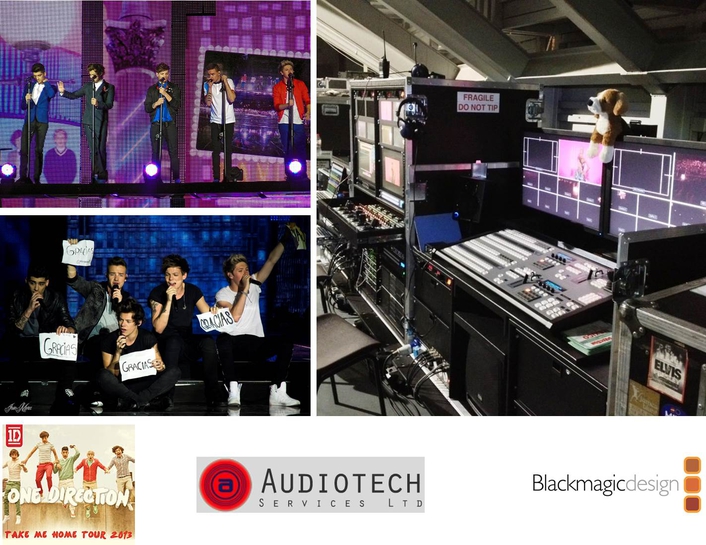 The concert tour consists of 120 shows in Australasia, Asia, Europe and North America, which broke records by selling more than 300,000 tickets in a single day, and includes a huge amount of video at each show. All of this is managed through a rack mounted AV control system supplied by Audiotech, providing full HD monitoring and recording, eight live camera inputs, stills playback and live HD web streaming.

Each night a backdrop is built for the show, featuring onstage LED screens with computer generated effects while a live camera relay is displayed on two LED screens, positioned left and right of the main stage. Seven HD SDI camera’s are used to capture the main performance, while a further seven are deployed as on stage mini cameras. Camera sources are routed via the Broadcast Videohub over SDI into the ATEM 2 M/E Production Switcher and mixed using the ATEM 2 M/E Broadcast Panel. Line cuts coming from the ATEM 2 M/E Production Switcher get routed into hardware which converts the SDI feed into DVI to be displayed directly onto the two side LED screens.

"It would have been ridiculous to think that we could have run the One Direction IMAG (image magnification) system without an SDI router and ATEM switcher," said video engineer Thomas Levitt. "It makes it so much easier, in that you're not physically having to patch and repatch cables. You can also control it via serial or ethernet, just logging in via Telnet and sending it the commands. Or with the router’s iPad app. We can integrate that easily into our show if we have switches we need to make at strategic points. It can all be automated over our network without us having to plug in a serial cable."

According to Tom, the ATEM 2 M/E Production Switcher was bought especially for this tour, not only for its broadcast grade features and panel but also for its one line video delay, a significant factor in video for concerts. “It's extremely fast compared to other video switchers, which maybe have one frame delay, or sometimes up to four frames, which makes them unusable for us, other than for live relay. With the ATEM, we're ahead of the game already. That was a big selling point for the ATEM switcher," he concluded.